Visual Basic for Applications (VBA) is an implementation of Microsoft's event-driven programming language Visual Basic 6 and its associated integrated development environment (IDE), which are built into most Microsoft Office applications. VBA enables building user defined functions, automating processes and accessing Windows API and other low-level functionality through dynamic-link libraries (DLLs). It was also built into Office applications apart from version 2008 for Apple's Mac OS X, other Microsoft applications such as Microsoft MapPoint and Microsoft Visio; as well as being at least partially implemented in some other applications such as AutoCAD, WordPerfect and ArcGIS. It supersedes and expands on the abilities of earlier application-specific macro programming languages such as Word's WordBasic. It can be used to control many aspects of the host application, including manipulating user interface features, such as menus and toolbars, and working with custom user forms or dialog boxes. VBA can also be used to create import and export filters for various file formats, such as OpenDocument (ODF).

As its name suggests, VBA is closely related to Visual Basic and uses the Visual Basic Runtime, but can normally only run code within a host application rather than as a standalone application. It can, however, be used to control one application from another via OLE Automation. For example, it is used automatically to create a Word report from Excel data, in turn automatically collected by Excel from polled observation sensors. The VBA IDE is reached from within an Office document by pressing the key sequence Alt+F11.

VBA is functionally rich and flexible but it does have some important limitations, such as restricted support for function pointers which are used as callback functions in the Windows API. It has the ability to use (but not create) (ActiveX/COM) DLLs, and later versions add support for class modules.

Code written in VBA is compiled[1] to a proprietary intermediate language called P-code (packed code), which the hosting applications (Access, Excel, Word and PowerPoint) store as a separate stream in COM Structured Storage files (e.g., .doc or .xls) independent of the document streams. The intermediate code is then executed[1] by a virtual machine (hosted by the hosting application). Despite its resemblance to many old BASIC dialects (particularly Microsoft BASIC, from which it is indirectly derived), VBA is incompatible with any of them except Visual Basic, where source-code of VBA modules and classes can be directly imported, and which shares the same library and virtual machine. Compatibility ends with Visual Basic version 6; VBA is incompatible with Visual Basic .NET (VB.NET). VBA is proprietary to Microsoft and, apart from the COM interface, is not an open standard.

Much of the difficulty in using VBA is related to learning the object model, which uses names invented by the originators of the model that may be less than transparent to a new user. One way to learn the terms and syntax of the object model is to use the macro recorder to record the steps taken to achieve a desired result using the mouse and menus of the application.[4] Once this is done, the VBA code constructed by the recorder can be viewed in the VBA editor, and often greatly streamlined or generalized with only a modicum of understanding of VBA itself. The macro recorder does not always record everything (particularly for graphs), and some applications employing VBA do not provide a recorder at all. Use of debugging tools to discover VBA constructs for some cases where the macro recorder does not work are described by Jelen and Syrstad,[5] but some steps may remain obscure.

A more complete description of the strengths and weaknesses of the Visual Basic language is found in Visual Basic.

VBA is generally used to save time by automating repetitive tasks in Microsoft Office applications like Excel, Access, Word and PowerPoint. But an improper style of coding, poor logic and lack of knowledge could introduce memory issues (sometimes even memory leaks) into the system, degrading overall performance. Common VBA practices include [6] :

For example: In Microsoft Access, users automatically have access to the Access library. References to the Excel, Word and Microsoft Outlook libraries can also be created. This will allow creating an application that runs a query in Access, exports the results to Excel, formats the text, then writes a mail merge document in Word that it automatically e-mails to each member of the original query through Outlook. (In this example, Microsoft Outlook contains a security feature that forces a user to allow, disallow, or cancel an e-mail being sent through an automated process with a forced 5 second wait. Information on this can be found at the Microsoft website.)

VBA programs can be attached to a menu button, a macro, a keyboard shortcut, or an OLE/COM event, such as the opening of a document in the application. The language also provides a user interface in the form of UserForms, which can host ActiveX controls for added functionality.

Like any common programming language, VBA macros can be created with a malicious intent. Using VBA, most of the security features lie in the hands of the user, not the author. The VBA 'host-application' options are accessible to the user. The user who runs any document containing VBA macros can preset the software with user preferences, much like those for web browsers. End-users can protect themselves from attack by disabling macros from running in an application if they do not intend to use documents containing them, or only grant permission for a document to run VBA code if they are sure the source of the document can be trusted. However, if the author is known VBA code is no more dangerous than any other 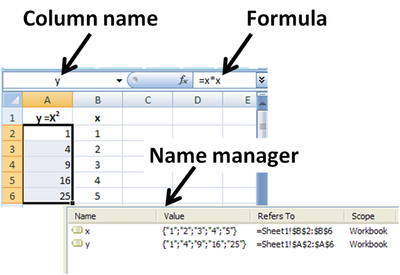 Use of named column variables x & y in Microsoft Excel; y = x*x is calculated using the formula displayed in the formula box, which is copied down the entire y-column. 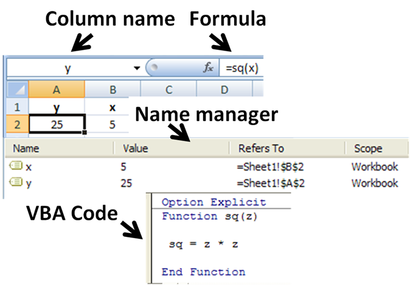 Use of a user-defined function sq(x) of named variable x in Microsoft Excel. Function supplied automatically from the code in the Visual Basic for Applications editor.

A common use of VBA is to add functionality that may be missing from the standard user interface. Use of VBA is made much easier by using named variables on the spreadsheet, as shown at the left. The formula for y=x2 resembles Fortran or BASIC, and the Name Manager shows the definitions of column variables y and x.

Using VBA, the user can add their own functions and subroutines that refer to these named ranges. In the figure at the right, the function sq is created in the Visual Basic editor supplied with Excel, and x & y are named variables in the spreadsheet. 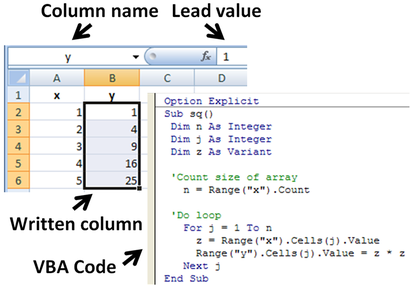 Functions themselves cannot write into the worksheet, but simply return their evaluation. However, in Microsoft Excel, subroutines can write values or text found within the subroutine directly to the spreadsheet. The figure shows the Visual Basic code for a subroutine that reads each member of the x-column (named column variable x), calculates its square, and writes this value into the corresponding y-column (also a named column variable). The y-column contains no formula because its values are calculated in the subroutine and simply written in..

This macro provides a shortcut for entering the current date in Word:

VBA is useful for automating database tasks such as traversing a table:

VBA is useful for automating repeated actions in rows of a spreadsheet. For example, using the following code example, the built-in iterative solver Goal Seek is applied automatically to each row in a column array, avoiding repeated use of manual menu entry. Below a column variable "C_M" determines the values of another column variable "Target" in some nonlinear fashion. The built-in nonlinear solver Goal Seek is called to find the value of "C_M" that brings "Target" to value one. The subroutine is inserted into the workbook using the VBA editor and command Insert Module. It is called directly from the VBA editor, or by using a "hot key" or keyboard shortcut. Values on the spreadsheet automatically update as the rows are scanned.

Subroutines have the power to update the contents of the workbooks; functions do not - they simply report their evaluation.

The line Option Explicit is not part of the subroutine: it sets a compiler option that forces identification of all variables that have not been specified in Dim statements, which avoids difficult to detect debugging problems caused by typos. Notation ( ' ) in the following code denotes a comment, and ( _) line continuation. The code uses 'named' variables: a form of cell reference in which cells are assigned names of user choice, rather than the standard cell designation denoting specific row and column numbers. Naming is done on the worksheet via the Excel "Name Manager", or menu Insert Name: Create.

In the example below VBA is used to get an array from a cell range, manipulate the array, and then set the values back in a different range. This works many times faster than directly setting the cell values one-by-one.

VBA can be used to create a user defined function (UDF) for use in a Microsoft Excel workbook:

As of July 1, 2007, Microsoft no longer offers VBA distribution licenses to new customers. Microsoft intended to add .NET-based languages to the current version of VBA ever since the release of the .NET Framework,[7] of which versions 1.0 and 1.1 included a scripting runtime technology named Script for the .NET Framework.[8] Also, Visual Studio .NET 2002 and 2003 SDK contained a separate scripting IDE called Visual Studio for Applications (VSA) that supported VB.NET.[9][10][11] One of its significant features was that the interfaces to the technology were also available via Active Scripting (VBScript and JScript), allowing even .NET-unaware applications to be scripted via .NET languages. However, VSA was deprecated in version 2.0 of the .NET Framework,[11] leaving no clear upgrade path for applications desiring Active Scripting support (although "scripts" can be created in C#, VBScript, and other .NET languages, which can be compiled and executed at run-time via libraries installed as part of the standard .NET runtime).

Support for VBA in the Mac OS X version of Microsoft Office was dropped (for one version) with the release of Microsoft Office 2008 for Mac.[12][13] The official reason given was that VBA relied heavily on machine code written for the PowerPC architecture, and that rewriting this code for dual PowerPC/Intel architectures would have added another 2 years to the development of the suite. However, the office suite can be automated via AppleScript to an extent. VBA was restored in Microsoft Office for Mac 2011. Microsoft has also clearly stated that they have no plans to remove VBA from the Windows version of Office.[14][15]

With Office 2010 Microsoft has introduced VBA7 which now contains a true pointer data type: LongPtr. This new data type allows referencing 64-bit address space. The 64-bit install of Office 2010 does not support common controls of MSComCtl (TabStrip, Toolbar, StatusBar, ProgressBar, TreeView, ListViews, ImageList, Slider, ImageComboBox) or MSComCt2 (Animation, UpDown, MonthView, DateTimePicker, FlatScrollBar) so legacy 32-bit code ported to 64-bit VBA code that depends on these common controls will not function. The 32 bit version of Office 2010 is unaffected by this issue.[16] VBA7 includes no 64-bit version of the common controls, so it leaves developers with no means to migrate VBA applications to 64-bits. Microsoft suggests contacting the software vendor for 64-bit versions of VBA controls.

With the release of Visual Studio 2005, Microsoft announced Visual Studio Tools for Applications (VSTA). Independent Software Vendors may contact Microsoft through their vstainfo email address to inquire about licensing VSTA to provide their end-users with customization facilities within their application, in a similar way to VBA. However, VSTA uses the Visual Studio 2005 or Visual Studio 2008 development environment for programming against the .NET Framework.