The Winged Victory of Samothrace, also called the Nike of Samothrace,[1] is a 2nd century BC marble sculpture of the Greek goddess Nike (Victory). Since 1884, it has been prominently displayed at the Louvre and is one of the most celebrated sculptures in the world.

The Nike of Samothrace, discovered in 1863, is estimated to have been created around 190 BC.[2] It was created to not only honor the goddess, Nike, but to honor a sea battle. It conveys a sense of action and triumph as well as portraying artful flowing drapery through its features which the Greeks considered ideal beauty.

Modern excavations suggest that the Victory occupied a niche in an open-air theater and also suggest it accompanied an altar that was within view of the ship monument of Demetrius I Poliorcetes (337–283 BC). Rendered in white Parian marble, the figure[3] originally formed part of the Samothrace temple complex dedicated to the Great gods, Megaloi Theoi. It stood on a rostral pedestal of gray marble from Lartos representing the prow of a ship (most likely a trihemiolia), and represents the goddess as she descends from the skies to the triumphant fleet. Before she lost her arms, which have never been recovered, Nike's right arm was raised,[4] cupped round her mouth to deliver the shout of Victory.[5] The work is notable for its convincing rendering of a pose where violent motion and sudden stillness meet, for its graceful balance and for the rendering of the figure's draped garments, compellingly depicted as if rippling in a strong sea breeze. Similar traits can be seen in the Laocoön group which is a reworked copy of a lost original that was likely close both in time and place of origin to Nike, but while Laocoon, vastly admired by Renaissance and classicist artists, has come to be seen[by whom?] as a more self-conscious and contrived work, Nike of Samothrace is seen as an iconic depiction of triumphant spirit and of the divine momentarily coming face to face with man. It is possible, however, that the power of the work is enhanced by the very fact that the head and arms are missing.

The statue’s outstretched right wing is a symmetric plaster version of the original left one. As with the arms, the figure's head has never been found, but various other fragments have since been found: in 1950, a team led by Karl Lehmann unearthed the missing right hand of the Louvre's Winged Victory. The fingerless hand had slid out of sight under a large rock, near where the statue had originally stood; on the return trip home, Dr Phyllis Williams Lehmann identified the tip of the Goddess's ring finger and her thumb in a storage drawer at the Kunsthistorisches Museum, Vienna, where the second Winged Victory is displayed; the fragments have been reunited with the hand,[6] which is now in a glass case in the Louvre next to the podium on which the statue stands.

The statue now stands over a supplementary platform over the prow that allows a better contemplation but was not present in the original. The different degree of finishing of the sides has led scholars to think that it was intended to be seen from three-quarters on the left.

A partial inscription on the base of the statue includes the word "Rhodios" (Rhodian), indicating that the statue was commissioned to celebrate a naval victory by Rhodes, at that time the most powerful maritime state in the Aegean.[7] 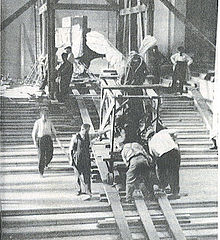 The great statue was carefully lowered down a ramp in 1939 when it was removed from the Louvre and Paris for safekeeping.

The product of an unknown sculptor,[8] the Victory is believed to date to approximately 190 BC.[9] When first discovered on the island of Samothrace (in Greek, Σαμοθρακη — Samothraki) and published in 1863 it was suggested that the Victory was erected by the Macedonian general Demetrius I Poliorcetes after his naval victory at Cyprus between 295 and 289 BC. The Archaeological Museum of Samothrace continues to follow these originally established provenance and dates.[10] Ceramic evidence discovered in recent excavations has revealed that the pedestal was set up about 200 BC, though some scholars still date it as early as 250 BC or as late as 180.[11] Certainly, the parallels with figures and drapery from the Pergamon Altar (dated about 170 BC) seem strong. However, the evidence for a Rhodian commission of the statue has been questioned, and the closest artistic parallel to the Nike of Samothrace are figures depicted on Macedonian coins.[12] Samothrace was an important sanctuary for the Hellenistic Macedonian kings. The most likely battle commemorated by this monument is, perhaps, the battle of Cos in 255 BC, in which Antigonus II Gonatas of Macedonia won over the fleet of Ptolemy II of Egypt.[13]

In April 1863, the Victory was discovered by the French consul and amateur archaeologist Charles Champoiseau, who sent it to Paris in the same year. The statue has been reassembled in stages since its discovery. The prow was reconstructed from marble debris at the site by Champoiseau in 1879 and assembled in situ before being shipped to Paris.

After 1884, the statue was positioned where it would visually dominate the Daru staircase.[14] Since 1883, the marble figure has been displayed in the Louvre, while a plaster replica stands in the museum at the original location of the Sanctuary of the Great Gods on Samothrace.

In the autumn of 1939, the Winged Victory was removed from her perch in anticipation of the outbreak of war. All the museums of Paris were closed on August 25. Artwork and objects were packed for removal to locations deemed more safe outside Paris for safekeeping. On the night of September 3, the statue descended the staircase on a wooden ramp which was constructed across the steps.[15] During the years of World War II, the statue sheltered in safety in the Château de Valençay along with the Venus de Milo and Michelangelo's Slaves.[16] 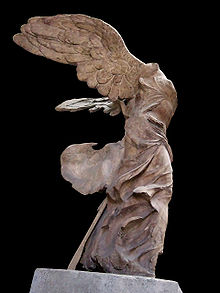 The Winged Victory of Samothrace, side view

Despite its significant damage and incompleteness, the Victory is held to be one of the great surviving masterpieces of sculpture from the Hellenistic period, and from the entire Greco-Roman era. The statue shows a mastery of form and movement which has impressed critics and artists since its discovery. It is particularly admired for its naturalism and for the fine rendering of the draped garments. It is considered one of the Louvre's greatest treasures, and since the late 19th century it has been displayed in the most dramatic fashion, at the head of the sweeping Daru staircase. The loss of the head and arms, while regrettable in a sense, is held by many to enhance the statue's depiction of the supernatural.

The art historian H.W. Janson has pointed out[17] that unlike earlier Greek or Near Eastern sculptures, Nike creates a deliberate relationship to the imaginary space around the goddess. The wind that has carried her and which she is fighting off, straining to keep steady – as mentioned the original mounting had her standing on a ship's prow, just having landed – is the invisible complement of the figure and the viewer is made to imagine it. At the same time, this expanded space heightens the symbolic force of the work; the wind and the sea are suggested as metaphors of struggle, destiny and divine help or grace. This kind of interplay between a statue and the space conjured up would become a common device in baroque and romantic art, about two thousand years later. It is present in Bernini's sculpture of David: David's gaze and pose shows where he is seeing his adversary Goliath and his awareness of the moment – but it is rare in ancient art.

The Victory soon became a cultural icon to which artists responded in many different ways. For example, Abbott Handerson Thayer's A Virgin (1892–93) is a well-known painted allusion. When Filippo Tommaso Marinetti issued his Futurist Manifesto in 1909, he chose to contrast his movement with the supposedly defunct artistic sentiments of the Winged Victory: "... a race-automobile which seems to rush over exploding powder is more beautiful than the 'Victory of Samothrace'."

The 1913 sculpture Unique Forms of Continuity in Space by the Futuristic sculptor Umberto Boccioni, currently located at the Museum of Modern Art (MoMA) in New York, was highly influenced by the statue. It bears an underlying resemblance to Nike of Samothrace.[18]

Numerous copies exist in museums and galleries around the world; one of the best-known copies stands outside the Caesars Palace casino in Las Vegas. The first FIFA World Cup trophy, commissioned in 1930 and designed by Abel Lafleur, was based on the model.

This statue was a favorite of Frank Lloyd Wright and he used reproductions of it in a number of his buildings, including Ward Willits House, Darwin D. Martin House and Storer House.

Swedish author Gunnar Ekelöf made Nike a central image in his poem Samothrace, written in 1941,[19] where the faceless deity, arms outstretched like sails, is made into a symbol of the fight and the coming victory against Nazism and the struggle for freedom throughout history. It also features in the Matthew Reilly novel Seven Ancient Wonders, where it is fictionally made part of the Statue of Zeus at Olympia.

In the parody novel Bored of the Rings, one character distracts another at a crucial moment by pointing into the empty sky and crying "Look! The Winged Victory of Samothrace!" This phrase has passed into science fiction fandom and internet culture as a humorous allusion to overt attempts to distract.

The second-largest replica of this statue in the United States stands at Calvary Cemetery, Pittsburgh, Pennsylvania, and is 8'1" high.

On February 3, 1999, according to the Macedonian Press Agency: News in English, "residents of the Aegean island of Samothrace, the birthplace of the renowned Greek sculpture Nike of Samothrace, aka the Winged Victory, embarked on a letter-writing campaign to have this finest extant of Hellenistic sculpture returned to their homeland.

In a letter signed by the island's mayor, the locals urged Greek politicians to intervene and request that the Louvre museum, where the statue is kept, acknowledge that the sculpture belongs in its natural environment."