Citizens Bank Park is a 43,647-seat baseball park in Philadelphia, Pennsylvania, part of the South Philadelphia Sports Complex, and home of the Philadelphia Phillies. Citizens Bank Park opened on April 3, 2004, and hosted its first regular season baseball game on April 12 of the same year, with the Phillies losing to the Cincinnati Reds, 4–1. The ballpark was built to replace the now-demolished Veterans Stadium (a football/baseball multipurpose facility), and features natural grass and dirt playing field and also features a number of Philadelphia-style food stands, including several which serve cheesesteaks, hoagies, and other regional specialties. The ballpark lies on the northeast corner of the Sports Complex, which includes Lincoln Financial Field and the Wells Fargo Center.

In 1999, the Phillies and the Philadelphia Eagles of the National Football League joined their Western Pennsylvania counterparts, the Pittsburgh Pirates and the Pittsburgh Steelers in making requests to replace both Veterans Stadium and Three Rivers Stadium in Pittsburgh with separate stadiums. Pressure for new Philadelphia stadiums increased after a railing collapsed at The Vet during the Army–Navy Game, injuring eight cadets. The Pirates threatened to leave Pittsburgh in 1997, which helped convince the legislature to approve funding for the four proposed stadiums. While Allegheny County and the City of Pittsburgh approved the pacts swiftly, due to plans already being in place at the time of legislative approval, debate within Philadelphia's city leadership carried on as Pittsburgh opened their stadiums (PNC Park for the Pirates and Heinz Field for the Steelers) in 2001. The Eagles agreed to a site slightly southeast of Veterans Stadium, which would become Lincoln Financial Field. The Eagles' stadium was built on the site of an old food warehouse and celebrated its grand opening in August 2003.

The Phillies originally wanted a downtown ballpark similar to Baltimore, Denver, Cincinnati, Cleveland, Detroit and San Francisco. Various locations were proposed, initially at Broad and Spring Garden streets, Spring Garden and Delaware Avenue and next to 30th Street Station, where the main post office was located. The team and the city announced that the site would be at 13th and Vine streets, just north of Interstate 676, within walking distance of the Center City downtown district. There was considerable support for a downtown ball park from business and labor and the city at large, but residents of the city's Chinatown section protested. The City and team eventually settled on building at the South Philadelphia Sports Complex, on the site of an old food warehouse much like Lincoln Financial Field. In the years that followed, residents, fans and owner Bill Giles expressed regret that the new ball park was not located in Center City. Regardless of location, the team set records in 2010 for attendance (3,647,249 fans, averaging 45,028) and sellouts (81), extending a streak dating back to July of 2009 to 123 straight sellouts.[4]

The unveiling of the park and ground breaking ceremonies were on June 28, 2001. Following the game that evening, the location of the left-field foul pole was unveiled at the outset of the team's annual July Fourth fireworks display. On June 17, 2003, Citizens Bank agreed with the team to a 25-year, US $95 million deal for naming rights and advertising on telecasts, radio broadcasts, publications and inside the facility.[5] The ballpark was officially topped off on August 12, 2003, and opened in April 2004.

Shortly after the park opened in 2004, the bullpens were reassigned so the Phillies' pitchers used the lower pen and visitors use the upper pen. This was done to give Phillies' pitchers a better view of the game and to protect them from heckling by rowdy fans.[6]

Even with these modifications, the park has a reputation as one of the most hitter-friendly parks in baseball.[8] In 2009, it gave up 149 home runs, the most in the National League and second in the majors behind only the new Yankee Stadium. 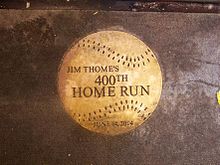 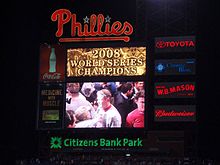 The scoreboard when the Phillies won the 2008 World Series

Behind center field is Ashburn Alley, named after Phillies Hall of Fame center fielder Richie Ashburn, who played for the team from 1948 to 1959 and was a Phillies broadcaster from 1963 until his death in 1997. It is seen by Phillies fans as a compromise between the Phillies and their fans, many of whom wanted Citizens Bank Park named in honor of Ashburn.

Ashburn Alley is named for the slightly-overgrown grass which bordered the third base line at Shibe Park where Ashburn was famous for laying down bunts that stayed fair. The new Ashburn Alley, located near Ashburn's defensive position, is a walkway featuring restaurants, games and memorabilia from Phillies history. Ashburn Alley also features a memorabilia shop and a large bronze statue of Ashburn directly behind center field, as well as the U.S. flag, the flags of the Commonwealth of Pennsylvania and the City of Philadelphia, a POW/MIA flag and the flags from the Phillies' championships (below).

Features of the Alley are: 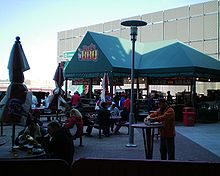 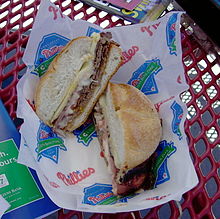 In 2004 and 2005, organist Paul Richardson performed from Ashburn Alley, as Citizens Bank Park was built without an organ booth.

The food at CBP was named as Best Ballpark Food in a survey of Food Network viewers in the first annual Food Network Awards which first aired on April 22, 2007. On August 14, it was announced that Citizens Bank Park was voted #1 by PETA as America's most vegetarian-friendly ballpark, which was repeated in 2008 and again in 2009.

Citizens Bank Park (right), the newest (2004) of the four venues which made up Philadelphia's "Sports Complex" at that time, the four-decade-old Wachovia Spectrum (center), the oldest (1967) facility at that time (the arena closed October 31, 2009. and was demolished in 2011), tree lined S. Broad St (left), and the city's expansive skyline along the horizon to the North, as viewed from the roof of the Wells Fargo Center (Philadelphia) (1996).

Besides the Richie Ashburn statue in Ashburn Alley, statues of three other famous Phillies — Robin Roberts (at the First Base Gate), Mike Schmidt (at the Third Base Gate) and Steve Carlton (at the Left Field Gate) — ring the outside of the facility. Each of the 10-foot-high (3.0 m) statues were made by local sculptor Zenos Frudakis. Other art found throughout the park includes tile mosaics, murals and terrazzo floors with outlined images of famous players in Phillies history.

In April of 2011, the Phillies accepted a gift of a fan-underwritten 7.5-foot-tall (2.3 m) bronze statue of legendary broadcaster Harry Kalas. Created by noted local sculptor Lawrence Nowlan, it was placed behind Section 141, near the restaurant that bears Kalas' name, after a dedication held on August 16, 2011 prior to that night's game against the Arizona Diamondbacks. The statue was unveiled two days later than originally scheduled (the originally-scheduled date is on a plaque on the ground below the statue) because of a rained-out game between the Phillies and the Washington Nationals. [26] [27]

The Philadelphia Phillies are the first Major League Baseball team to join the Environmental Protection Agency's Green Power Partnership Program which motivates organizations across the world to purchase green power in order to minimize environmental impact. The Phillies announced on April 30, 2008 that their home field, Citizens Bank Park, will be powered with 20 million kilowatt-hours (kWh) of green energy purchased in Green-e Energy Certified Renewable Certificates (RECs).[28][29] The EPA stated that this purchase holds the record in professional sports for the largest purchase of 100% renewable energy.[28] The Phillies are among the top three purchasers of green power in Philadelphia, and the executive director of the Center for Resource Solutions, Arthur O'Donnell, wants "other clubs to take their lead."[30] Aramark Corporation is the Phillies' food and beverage provider at Citizens Bank Park and they are taking major actions in improving the environmental impact of the Phillies' stadium. Glass, cardboard, and plastics used during game day are recycled; frying oil is being recycled to produce bio-diesel fuel, and biodegradable, recyclable, and compostable products, serviceware, and plastics have been introduced.[30]

The first concert at the park was Jimmy Buffett & The Coral Reefer Band on August 25, 2005, they returned on June 14, 2008. The Eagles, The Dixie Chicks and Keith Urban were scheduled to perform on June 14, 2010, but the show was cancelled.

Other performers who have played at the park include Billy Joel and Elton John in a duet concert, Bon Jovi and The Police. On November 1, 2011, it was announced that former Pink Floyd member Roger Waters would perform The Wall in concert on July 14, 2012.[31]

Due to the City of Philadelphia's smoking ban, smoking is only permitted at the first base gate, the third base gate and the left field gate.

Dan Baker, public address announcer for the Phillies since 1972, continues to introduce the players. During each player's first at-bat, Baker, in an excited voice, says, "Now batting for the Phillies, number (#), (position), (player's name)".

For example, a first at-bat introduction would have Baker say, "Now batting for the Phillies, number eight, center fielder Shane Victorino!" During subsequent at-bats, players are only announced by their position and name, for example, "Phillies first baseman, Ryan Howard!"

Baker only uses the city of the opposing team when he announces their players rather than the team nickname, for example, "Now batting for Atlanta, number ten, third baseman Chipper Jones", and makes the announcement in a more-subdued tone.

In 2004 and 2005, Citizens Bank Park installed Daktronics video and message display in the park. One of the largest incandescent displays in Major League Baseball was installed in left field that was used as a scoreboard and for giving statistics. There are also out-of-town field-level displays installed in the park that measure approximately 10 feet high by 25 feet wide.[32] During the 2010–2011 offseason, the Phillies replaced their incandescent scoreboard with a new HD scoreboard that cost $10 million. The new screen measures 76 feet (23 m) high and 97 feet (30 m) wide, which nearly triples the size of the old screen, and is the largest HD screen in the National League.[33]