Detail of the large limestone pavement in the Yorkshire Dales between Ingleborough and Pen-y-ghent. 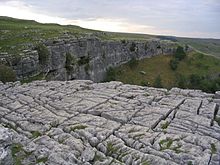 A limestone pavement is a natural karst landform consisting of a flat, incised surface of exposed limestone that resembles an artificial pavement.[1] The term is mainly used in the UK where many of these landforms have developed distinctive surface patterning resembling block of paving.[2] Similar landforms in other parts of the world are known as alvars.

Formation of a limestone pavement

Conditions for limestone pavements are created when an advancing glacier scrapes away overburden and exposes horizontally-bedded limestone, with subsequent glacial retreat leaving behind a flat, bare surface. Limestone is slightly soluble in water and especially in acid rain, so corrosive drainage along joints and cracks in the limestone can produce slabs called "clints" isolated by deep fissures called "grikes" or "grykes",[2] terms derived from the North of England dialect. If the grykes are fairly straight and the clints are uniform in size, the resemblance to man-made paving stones is striking, but often they are less regular. Limestone pavements that develop beneath a mantle of topsoil usually exhibit more rounded forms.

Limestone pavements can be found in many previously-glaciated limestone environments around the world. Notable examples are found in the Yorkshire Dales in Northern England, such as those above Malham Cove and on the side of Ingleborough. They are also found in the Stora Alvaret in Öland, Sweden; in the Burren, County Clare, Ireland and in the Désert de Platé,[3] in the French Alps.