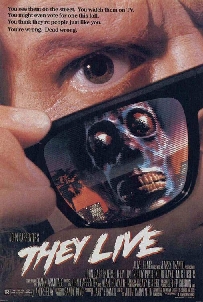 Part thriller and part , the film echoed contemporary fears of a declining economy, within a culture of and common among Americans in the 1980s. In "They Live", the ruling class within the monied elite are in fact aliens managing human social affairs through the use of subliminal media advertising and the control of economic opportunity.

Nada () is a homeless laborer who finds work on a construction site. One of the workers, Frank Armitage (), takes him to spend the night at a local . While being shown around, he notices odd behavior at a small church across the street. Investigating the next day, he discovers that the soup kitchen they are operating is a sham. The choir practice is a recording, scientific apparatus and stacks of cardboard boxes are scattered around the rear areas of the building, and he accidentally stumbles on several more boxes hidden in a secret compartment in a wall.

That night, the police surround the church, forcing the inhabitants to flee. The police then turn on the shantytown, destroying it with bulldozers and beating the blind minister of the church. Nada returns to the site the next day and investigates the church again, which has been emptied. He takes one of the boxes from the secret compartment and opens it in an alleyway, finding it full of sunglasses. He keeps one pair and leaves the rest in a garbage can.

When Nada later dons the glasses for the first time, the world appears in shades of grey, with significant differences. He notices that a billboard now simply displays the word "Obey"; without them it displays the ad that is "creating a transparent computing environment." Another billboard (normally displaying "Come to the Caribbean" written above a lovely woman lying on a beach) now displays the text "Marry and Reproduce." He also sees that paper money bears the words "This is your God." All printed matter around him contains .

Additionally, he soon discovers that many people are actually aliens, who are human-looking except for skull-like faces. When the aliens realize he can see them for what they truly are, the police suddenly arrive. Nada escapes and steals a police shotgun, going on a shooting spree at a local bank filled with aliens. One sees him and disappears after twisting a dial on his wristwatch. He forces a woman at gunpoint to take him to her house in the Hollywood Hills. Taking off the glasses to rest, he remarks "these glasses are like a drug...but when you take them off, you come down hard." Holly (the woman) tricks Nada and pushes him through her window, nearly killing him. He leaves behind his pair of sunglasses, however.

After recovering, Nada returns to the construction site to talk over with Frank what he discovered. Seeing Nada as a wanted man for the shooting spree, Frank is initially uninterested in his story. The two engage in a long fight as Nada attempts to convince and then force Frank to put on the sunglasses. When Frank finally puts on the glasses, he sees the aliens around him as well. Frank joins Nada as they get in contact with the group from the church. They learn that a meeting is being held at a local community center later that evening. The community group listens to a seminar in the background introducing radical ideas. For example, the aliens are blamed for and emissions--"they are turning our atmosphere into their atmosphere"--and quickly using up the planet's resources. Holly returns, claiming to now believe John, and delivers some information to the rebels.

At the meeting, they learn that the aliens' primary method of control is a signal being sent out on television, which is why the general public cannot see the aliens for what they are. An unknown but brilliant inventor has created a lens (it is called a Hoffman lens, perhaps named after Albert Hoffman, the inventor of LSD; this is not explained in the movie). The lens shows the world as it really is. The sunglasses, which are also available as contact lenses, interfere with the aliens' hypnotic signal. The meeting is raided by the police, who shoot to kill. Nada and Frank escape with the help of one of the wrist devices. They find themselves in an unknown building where the aliens are throwing a party for their human collaborators.

The building turns out to be the basement of a local TV station, Cable 54, and the source of the aliens' signal. Holly, who works at the station, is found by Frank and Nada and they take her with them to the roof. When Nada runs up to the roof, expecting Holly and Frank behind him, Holly kills Frank. Holly then takes aim at Nada when she gets to the roof. Nada manages to destroy the broadcasting antenna, being killed, and killing Holly in the process. As a last dying act, Nada gives the aliens the finger. With the signal now missing, people around L.A. are surprised to discover aliens in their midst--chatting with them at the bar, meeting with them at the office, and even having sex with them.

The idea for "They Live" came from two sources: a short story called "Eight O'Clock in the Morning" by Ray Nelson, originally published in "" in the 1960s, involving an alien invasion in the tradition of "", and a story called "Nada" from the "" comic book.

The more political elements of the film are derived from Carpenter's growing distaste with the ever-increasing commercialization of 1980s popular culture and politics. He remarked, "I began watching TV again. I quickly realized that everything we see is designed to sell us something... It's all about wanting us to buy something. The only thing they want to do is take our money." To this end, Carpenter thought of sunglasses as being the tool to seeing the truth, which "is seen in black and white. It's as if the aliens have colorized us. That means, of course, that is really a monster from outer space." (Turner had received some bad press in the 1980s for colorizing old black-and-white movies often considered classics, and airing them on his television networks.) The director commented on the alien threat in an interview, "They want to own all our businesses. A Universal executive asked me, 'Where's the threat in that? We all sell out every day.' I ended up using that line in the film."

After a budget of approximately three million dollars was raised, Carpenter began casting the film. For the crucial role of Nada, the filmmaker cast professional wrestler , whom he met at earlier in 1987. For Carpenter it was an easy choice: "Unlike most Hollywood actors, Roddy has life written all over him." Carpenter was impressed with 's performance in "The Thing" and needed someone "who wouldn't be a traditional sidekick, but could hold his own." To this end, Carpenter wrote the role of Frank specifically for the actor. Because the screenplay was the product of so many sources: a short story, a comic book, and input from cast and crew, Carpenter decided to use the pseudonym "Frank Armitage," an allusion to one of the filmmaker's favorite writers, H.P. Lovecraft (Frank Armitage is a character in Lovecraft's ""). Carpenter has always felt a close kinship with Lovecraft's worldview and according to the director, "Lovecraft wrote about the hidden world, the world underneath. His stories were about gods who are repressed, who were once on Earth and are now coming back. The world underneath has a great deal to do with "They Live".""They Live" was shot in eight weeks during March and April 1988, principally on location in downtown L.A. with a budget only slightly larger than $3,000,000.

The sociocultural critique within the film was picked up by other artists and cultural commentators, such as street artist , who added the word "Obey" to his world famous image of after seeing the film, and conspiracy theorist/author Fact|date=September 2008.

One of the highlights of the film is a five-and-half minute alley fight between David and Piper over a pair of the special sunglasses. Carpenter recalls that the fight took three weeks to rehearse: "It was an incredibly brutal and funny fight, along the lines of the slugfest between and in ""."

The aliens were deliberately made to look like ghouls according to Carpenter who said, "The creatures are corrupting us, so they, themselves, are corruptions of human beings."

The communicators used by the aliens are the same prop that was used as the in both features. Fact|date=June 2008

Although not an immediate commercial success, the film developed a cult following, reflected by a "" rating of 89%, although it was as high as 96% at one point. [ [http://www.rottentomatoes.com/m/they_live/ They Live Movie Reviews, Pictures--Rotten Tomatoes ] ] Carpenter is on record as attributing the film's initial commercial failure to result from an audience "...who go to the movies in vast numbers these days [who] don't want to be enlightened."

The fight scene in "They Live" was reproduced nearly shot for shot in the "" episode "."

The "" episode "The Tale of the Super Specs" pays homage to the movie. The episode revolves around a guy and his friends who buy special glasses and are able to see people from other dimensions inhabiting Earth.

The first track on the album "" starts with a clip from "They Live" in which a politician is giving a speech about a "new ."