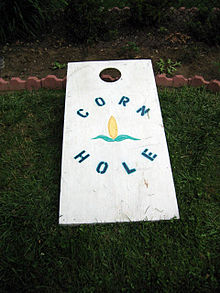 Cornhole, also known as bean bag toss, baggo or bags, is a lawn game in which players take turns throwing bean bags at a raised platform with a hole in the far end. These platforms are usually made with plywood or plastic and are often decorated. A corn bag in the hole scores 3 points, while one on the platform scores 1 point. Play continues until a player reaches the score of 21.

Cornhole matches are broken down into innings or frames of play. During each inning, every player throws four bags. A player may deliver the bag from either the left or right pitcher's box, but, in any one inning, all bags must be delivered from the same pitcher’s box. It is possible that both players can throw from the same pitcher's box. Also, the player gets a three foot box to throw in. Each player must deliver the bag within twenty seconds. The time starts when the player steps onto the pitcher’s box with the intention of pitching. The player who scored in the preceding inning pitches first in the next inning. If neither pitcher scores, the contestant or team who pitched last in the preceding inning pitches first in the next inning.

Cornhole can be played as either doubles or singles. In doubles play, four players split into two teams. One member from each team pitches from one cornhole platform and the other members pitch from the other. The first side of players alternate pitching bags until both players have thrown all four of their bags, then the players pitching from the opposing cornhole board continue to alternate in the same manner until all four of their bags are delivered and the inning or frame is completed. In singles play, two players play against each other. Delivery is handled in the same manner as doubles play. Both contestants pitch from the same cornhole platform and alternate their pitches until all of their bags have been pitched, completing the inning or frame.[1]

In order to score, the bags must either be tossed into the hole or land on the board. A bag that falls through the hole is worth a value of three points. The bag can be tossed directly into the hole, slide into the hole, or be knocked into the hole by another bag. A bag that lands on the board and is still on the board at the end of the inning is worth one point. If a bag touches the ground and comes to rest on the board, it is removed from the board prior to continuation of play and not worth any points. Usually, cancellation scoring is used. In cancellation scoring, bags that fall in the hole and bags that land on the board that are pitched by opponents during a frame cancel each other out. That is, if one player scores four points and the other player scores three points, the first player receives one point for the inning. In case of a tie, the team who ties the game, must go first.[1]

A cornhole match is played until the first player or team reaches or exceeds twenty-one points at the completion of an inning. The winning team does not need to win by two or more points. [1]

Another scoring variation requires one team to earn exactly twenty-one points; and if a team exceeds that number their team must return to fifteen points and the game continues.

The history of the game is mostly unknown,[2] though stories abound. One story claims that the game was first played during the 14th century in Germany, then rediscovered in Ohio within the last century.[2] Many American scholars confirm that a game of very similar nature was played amongst Native Americans in Midwest America, who filled pigs' bladders with dried beans and competitively tossed them for entertainment, notably, the Blackhawk tribe in Illinois. Debate about whether the game was actually created in the Kentucky farmland, the tundra of Anchorage, AK or the West Side of Cincinnati,[3] is ongoing. Popularity of the game began to increase in the late 1990s in Athens, Ohio, and East Lansing, Michigan, area universities, particularly Ohio University and Michigan State University, where cornhole became a mainstay at parties and as a casual drinking game.[citation needed]

Ace or cow pie
A bag lands on the board, which is worth one point.[4][5]
Airmail
A bag that lands directly in the hole without making any contact with other areas of the board. Sometimes referred to as "swishing".
Back door
A cornhole that goes over the top of a blocker and into the hole.[4][5]
Backstop
A bag that lands past the cornhole but remains on the board creating a backboard for a slider to knock into without going off the board.[4]
Blocker
An ace that lands in front of the hole, essentially blocking the hole from sliders.[4][5]
Buckets
An exclamation made when a cornhole bag goes into the hole, or the act of throwing the bag into the hole itself. One cornhole followed by another can be called "Response Buckets."
Carlton
A toss that results in one's bag knocking an opponent's bag into the cornhole. Named for either the all-time MLB leader in balks, Steve Carlton, or the likeable character from "Fresh Prince of Bel-Air."
Chances Double
Players call out "Chances double," when an opposing player achieves a cornhole, alluding to the impression that the next player often throws a cornhole in response to the challenge. "Chances Double" is a form of Gambler's fallacy.
Cornfusion
When players or teams cannot agree on the scoring of a given inning.[4]
Cornhole or Drāno
A bag falls in the hole, which is worth three points.[4] The alternative name is a reference to a trademark, that of a sink clog clearing product.
Dirty bag
A bag that is on the ground or is hanging off the board touching the ground.[5]
Dirty roll up
A point scored when the bag hits the ground before landing on the board.[5]
Frame
A frame consists of both players throwing their 4 bags. After each player has thrown 4 bags, the score is calculated and a new frame begins. Sometimes referred to as "corn row".
Galbraith or Jumanji
When a player makes all four bags into the hole during his or her turn. Can also be deemed in fractions : quarter Galbraith, half Galbraith, and three quarter Galbraith.
Gusher or double deuce or Catorce
Four cornholes by a single player in a single round.[4]
Golden Sombrero
When a player makes all four bags into the hole during one round.
Hammond
When a Slider or Swish is executed and then your opponent immediately evens the score by doing the same thing. Also known as a One-Upper, or in some instances a Demoralizer.
Hanger or Shook
An ace on the lip of the hole ready to drop.[4][5]
Honors
The team who tosses first, resulting from the team scoring last.[5]
Hooker
A bag hitting the board and hooking or curving around a blocker and going in the hole.[4]
Jumper
A bag that strikes another bag on the board causing it to jump up into the cornhole.[4]
Leprechaun
When a player attains all four bags onto the board without getting any into the hole.[4]
Police
The cornhole referee.[4]
Power Wash
A round in which all four bags from each opposing player land on the board, causing the round score to be zero, a wash.
Pressure Cooker
When both players on one end continually negate each others scores thus creating a very tense situation.
Sally
A toss that is thrown too weakly and lands on the ground before reaching the board.[4]
Shucker
When a player pitches a bag and it strikes an opposing players bag knocking it off the board.[4]
Skunk or whitewash, shutout
A game that, by some rules, ends in an 11-0 score.[4][5]
Slider
A cornhole that slides into the hole.[4][5]
Swish
A bag that goes directly in the hole without touching the board.[5] Sometimes this is also referred to as "air-mail".
Wash or Laundry
When the scores of a single round amount to zero, the round is called a wash.
Woody
A bag that lands on the surface of the board, which is worth 1 point. Sometimes referred to as "ace" or "cow pie".