George Lynch (born September 28, 1954) is a guitarist best known as a member of the band . 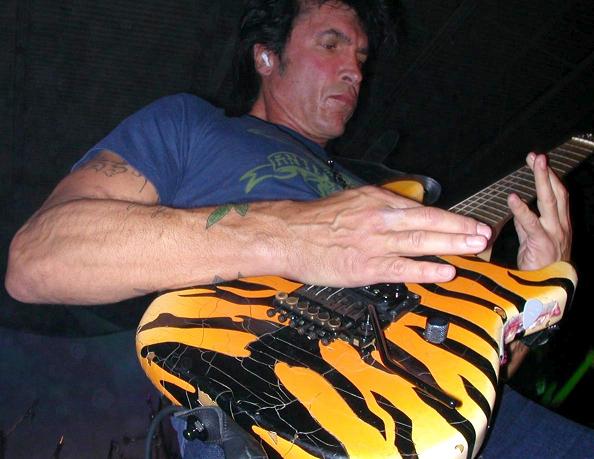 Lynch was born in and raised in the small town of Auburn, . Lynch is known for his common use of the scale he calls the 'Gothic Octave'. Guitarist claims George started two hand tapping before Eddie Van Halen did. [ [http://www.melodicrock.com/interviews/markkendall.html MelodicRock.com Interviews: Great White's Mark Kendall ] ] Twice Lynch auditioned for the position of 's lead guitarist, once in 1979 – losing to Randy Rhoads – and another time in 1982 to replace . According to Lynch, he was hired for three days before Ozzy changed his mind and decided to go with . Lee, however claims that Lynch "got the gig, but only went on the road for two weeks to watch the show, and never actually played with Ozzy." Lynch looks back on the situation positively though, he has said "I won the consolation prize, Randy got to tour with Ozzy...and I got to teach at his mom's school."

Lynch came to fame in the 1980s through his work as the lead guitarist in the band (of which he had been a member since 1980). Dokken had a string of successful s such as "Under Lock And Key" and "Back For The Attack", that prominently featured Lynch's inventive lead guitar work and cemented his reputation as a bonafide guitar hero. The instrumental track "Mr. Scary" on Back For The Attack contributed to his popularity among guitar players. The band earned a grammy nomination for the "best rock instrumental" in 1989.

In spite of the band's popularity, the group parted ways in March 1989 due to internal tensions with lead vocalist . Lynch formed his own hard rock band Lynch Mob which differed from Dokken in lyrical complexity, subject matter, song structure, guitar complexity and tuning, and a notably different approach to vocal harmony than Dokken's soaring harmonies. Lynch then took time off and his wife had a baby girl named Mariah Lynch. After spending a few years with his family he got back to work. In 1993, Lynch released his first solo album, "Sacred Groove".

By 1994, after Don Dokken, Jeff Pilson and Mick Brown reunited, they decided to try and bring Lynch back into the fold as well for a true reunion of . Lynch agreed to put all differences aside to give it a go once more. The reunited version of was signed to the Columbia/Sony label and after extensive writing, released . Unfortunately the the album did not do as well as expected and the band was dropped from the label. then signed on with and released an unplugged show the band performed in late 1994 titled . By 1996 the band entered the studio and hired producer Kelly Gray. Gray along with Lynch, Pilson and Brown wanted to take in a new direction to the dismay of vocalist and founder and released which was a complete switch from melodic rock to a more alternative sound. Lynch still found time to appear at guitar clinics for and attend the annual . By 1997, tensions had again flared between Don and Lynch which lead to Lynch's firing from . This prompted Lynch to call his former members , and for a reunion of . The group entered the studio and demo-ed a solid 3 songs (;ater released as an EP titled ). However Logan decided to leave the band to pursue other projects before a full album could be completed. Mick Brown decided to stay with Dokken.

George himself then decided he wanted to take in a totally new direction influenced by contemporary bands. The Lynch Mob's radical new look and interesting new musical approach attracted a younger audience. In 1999 they released the album "Smoke This". After touring in support of "Smoke This" Lynch decided to put Lynch Mob on hold for a couple years, but not until he toured with Lynch Mob's original singer Oni Logan, L.A. Guns' bassist Chuck Garric, and Bulletboys' drummer Jimmy D'Anta in late 2001. Then in late 2002, George Lynch decided to reform Lynch Mob with original bassist Anthony Esposito and the singer from their 2nd album Robert Mason. Lynch Mob then recorded an album of re-recorded classic Lynch songs from Dokken and Lynch Mob albums, updated to a more contemporary (post-2000) approach and sound.

He also formed a project with former Dokken bassist called 'Lynch/Pilson'- Wicked Underground. In 2003 Lynch formed 'The George Lynch Group' in which he has continued to record and regularly tour. The George Lynch Group performed a marathon, 26 shows in 30 days, including a much talked about feature on the Tonight Show with Jay Leno. The line-up is: - Guitars, - Vocals,
(Black Sabbath/Dio) - Drums, (Lizzy Borden/Starwood/Legacy) - Bass. The 2005's "Furious George" album is a cover album, including classic rock tunes from ZZ Top, Jimi Hendrix, the Beatles, AC/DC, and Led Zeppelin.

On May 13, 2008, "Let the Truth Be Known" was released under the band name . It features (vocals), Johnny Chow (bass), and Yael (drums). [ [http://soulsofwe.com/bio.pdf http://soulsofwe.com/bio.pdf] ] Despite this new band and new album, in the early fall of 2008 Lynch embarked on a tour with a reformed Lynch Mob featuring original singer , bassist and drummer . A new Lynch Mob album featuring Logan would be in the works and due to be released in 2009.

Lynch has been an endorser of since 1986. His famed guitar affectionately named "Mom" is one of the most famous in modern rock, and was designed and hand-crafted by a friend (the neck was given by ESP). "Mom" is actually a J Frog guitar but since George was endorsing ESP guitars, an ESP decal was applied to the headstock. Several George Lynch signature guitars have been produced by ESP Japan since then:

- The Kamikaze model, based on his first ESP guitar
- The Tiger model, a replica of a home made Strat George released in 1980
- The Skull & Snakes, a design that was later used as the Lynch Mob "Wicked Sensation" album artwork
- The Flame Boy is based on an ESP Forest design
- The New Super V includes distressed hardware and features and a new "Super V" pickup
- Featured in the "Breaking the Chains" music video, he had custom made chain like strings on his tiger guitar.

- The Serpent, an ESP model released and used in the 1990s. An LTD signature series model was released in 2008.

Seymour Duncan created for George Lynch the Screaming Demon guitar pickup (SH-12 and TB-12), featured on all the ESP Lynch signature guitar series. This pickup is one of their best sellers.They also recently designed the new Super V pickup to be featured in the Super V model.This pickup can be ordered from the Seymour Duncan custom shop. His immoderate use of Marshall, , & amps and effects units to achieve his famous tone is well known in rock guitar circles. His rig changes on every tour.Lynch currently endorses Randall amplification and participated in the design of a new George Lynch Box for their modular amp system.

While on tour in 2005 he has used the Randall Dragon (non master volume) tube head for the majority of his sound. The design is very similar to the older Marshall Plexi heads that he used early on in Dokken.

A Morley A/B box called the Tripler is also available. It includes a Boost.

A limited edition GL Time Machine boost was made available in 2004.

Lynch is endorsing the hand-crafted L-Series Acoustic Guitars and is on an Asian 'Unplugged' except for a Marshall stack, Clinic tour May/June 2006.

Lynch has also designed a new high-nickel content string through the company to be on the market soon but his name will not be on the package, their name is Super V's.