Erin Jill Andrews (born May 4, 1978) is an American sportscaster, journalist, and television personality. As of 2011 she is a co-host of the ESPN entertainment show College GameDay and a contributor for Good Morning America on the ABC network.[1][2] Andrews has been described as one of the most attractive sportscasters on television, a label for which she has received substantial media attention.[3][4]

Andrews was born in Lewiston, Maine to Paula Andrews, a teacher, and Steven Andrews, a TV journalist.[5][6] She moved to Tampa, Florida as a young girl when her father, a six-time Emmy Award-winner, began working as an investigative reporter for WFLA-TV.[7]

Andrews attended Bloomingdale High School in Valrico, Florida, where she was a member of the cheerleading team, student government, and the National Honor Society.[6][8] Following her graduation from high school in 1996, Andrews attended the University of Florida, graduating in 2000 with a Bachelor of Arts (BA) degree in Telecommunications.[1] While in college, she was a member of the Zeta Tau Alpha sorority.[9] and the Florida Gators Dazzlers, a dance team, from 1997 to 2000.[1] She also has a younger sister Kendra Andrews, who is a professional dancer and actor.[10] 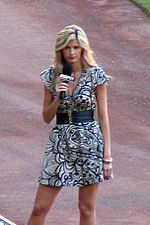 In 2000, Andrews joined Fox Sports Florida as a freelance reporter. In 2001-2002, she served as a Tampa Bay Lightning reporter for the Sunshine Network. From 2002-2004, Andrews covered the Atlanta Braves, Atlanta Thrashers, and Atlanta Hawks for the Turner South network as a studio host and reporter.[1]

Andrews began working for ESPN in May 2004 as a reporter for ESPN National Hockey Night. She has also reported for the College World Series, Little League World Series, and Great Outdoor Games. Andrews began serving as a sideline reporter for ESPN College Football Saturday Primetime and Big Ten college basketball games, and in 2005, her job expanded to include ESPN College Football Thursday Primetime and Major League Baseball sideline reporting. From 2008 to 2010, she reported for ESPN’s and ABC’s live coverage of the Scripps National Spelling Bee.[1]

Andrews has been a guest on several talk shows, including The Oprah Winfrey Show, Jimmy Kimmel Live!, and The Tonight Show with Jay Leno.[11]

In 2010, Andrews appeared on the tenth season of ABC's Dancing with the Stars. She and professional partner Maksim Chmerkovskiy placed third out of 11 contestants.[12]

Andrews currently hosts the first hour of ESPN's College GameDay on ESPNU and has been a Good Morning America correspondent on ABC since 2010.[2]

In 2010, Andrews became a spokesperson for the Kraft Foods Huddle to Fight Hunger campaign which aimed to raise $2.86 million for Feeding America.[13] In May 2011, she co-hosted the Music Builds: CMT Disaster Relief Concert on the CMT network to raise money for the American Red Cross in response to the April 27th tornadoes in the Southern United States.[14] In September 2011, Andrews partnered with StubHub to support the Girls Night Out initiative, a program to encourage women to attend more sporting events. A portion of ticket revenues generated through the program goes to the Tragedy Assistance Program for Survivors, a support organization for survivors of deceased military personnel.[15]

In 2008, Michael David Barrett, 46, filmed Andrews in her hotel room through peepholes at the Nashville Marriott at Vanderbilt University in Nashville, Tennessee and the Radisson Airport Hotel in Milwaukee, Wisconsin. On July 16, 2009, one of these videos, in which Andrews was nude, was posted online and quickly went viral.[16][6] Barrett was arrested on October 2, 2009 by the FBI for interstate stalking, and pled guilty to the charges on December 15, 2009.[17][18] On March 15, 2010, Barrett was sentenced to 30 months in prison, 3 years of probation, $5,000 in fines, and $7,366 in restitution.[19] He is currently serving his sentence at the Federal Correctional Institution in Edgefield, South Carolina and is scheduled to be released on July 3, 2012.[20]

Andrews has sued Barrett, Marriott International, Radisson Hotels, and five other entities for negligence and invasion of privacy in connection with the secret videotaping.[21] In 2011, Andrews worked with U.S. Senator Amy Klobuchar to enact a new federal anti-stalking law.[22]