Collections of the Palace Museum

Collections of the Palace Museum 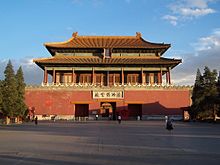 The Gate of Divine Might, the northern gate. The lower tablet reads "The Palace Museum" (故宫博物院)

The art collections of the Palace Museum (Chinese: 故宫博物院; pinyin: Gùgōng Bówùyùan), a national museum housed in the Forbidden City in Beijing, China, are built upon the imperial collection of the Ming and Qing dynasties. This collection was expanded in the 20th century with new acquisitions, transfers from other museums, and new archaeological discoveries. 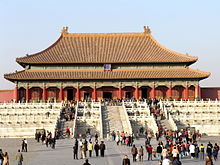 The Palace Museum is housed in the Forbidden City, the Chinese imperial palace from the Ming Dynasty to the end of the Qing Dynasty. It is located in the middle of Beijing, China. For almost five centuries, it served as the home of the Emperor and his household, and the ceremonial and political centre of Chinese government.

Built from 1406 to 1420, the complex consists of 980 surviving buildings with 8,707 bays of rooms[1] and covers 720,000 square metres. The palace complex exemplifies traditional Chinese palatial architecture,[2] and has influenced cultural and architectural developments in East Asia and elsewhere. The Forbidden City was declared a World Heritage Site in 1987,[2] and is listed by UNESCO as the largest collection of preserved ancient wooden structures in the world.

Built from 1406 to 1420, the Forbidden City was the Chinese imperial palace from the early Ming Dynasty to the end of the Qing Dynasty. In 1912, Puyi, the last Emperor of China, abdicated. Under an agreement with the new Republic of China government, Puyi remained in the Inner Court, while the Outer Court was given over to public use,[3] where a small museum was set up to display artefacts housed in the Outer Court. In 1924, Puyi was evicted from the Inner Court after a coup.[4] The Palace Museum was then established in the Forbidden City on Double Ten Day (October 10), 1925.[5] 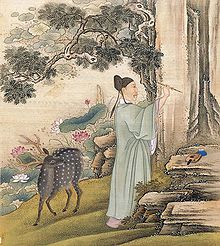 From Album of the Yongzheng Emperor in Costumes, by anonymous court artists, Yongzheng period (1723—35).

The collections of the Palace Museum are based on the Qing imperial collection. According to the results of a 1925 audit,[6] some 1.17 million items were stored in the Forbidden City. In addition, the imperial libraries housed one of the country's largest collections of ancient books and various documents, including government documents of the Ming and Qing dynasties.

From 1933, the threat of Japanese invasion forced the evacuation of the most important parts of the Museum's collection.[7] After the end of World War II, this collection was returned to Nanjing.[8] However, with the Communists' victory imminent in the Chinese Civil War, the Nationalist government under Chiang Kai-shek ordered the evacuation of the pick of this collection to Taiwan. Of the 13,427 boxes of evacuated artefacts, 2,972 boxes are now housed in the National Palace Museum in Taipei. This relatively small but high quality collection today form the core of that museum.[9] Almost ten thousand boxes were returned to Beijing, but 2,221 boxes remain today in storage under the charge of the Nanjing Museum.[9]

Under the government of the People's Republic of China, the Museum conducted a new audit as well as a thorough search of the Forbidden City, uncovering a number of important items. In addition, the government moved items from other museums around the country to replenish the Palace Museum's collection. It also purchased and received donations from the public.[10]

In recent years, the presence of commercial enterprises in the Forbidden City has become controversial.[11] A Starbucks store,[12] which opened in 2000,[13] sparked objections [14] and eventually closed on July 13, 2007. Chinese media also took notice of a pair of souvenir shops that refused to admit Chinese citizens in order to price-gouge foreign customers in 2006.[15]

Today, there are over a million rare and valuable works of art in the permanent collection of the Palace Museum,[16][17] including paintings, pottery, inscribed wares, bronze wares, court documents, etc.[16] According to an inventory of the Museum's collection conducted between 2004 and 2010, the Palace Museum holds a total of 1,807,558 artifacts and includes 1,684,490 items designated as nationally protected "valuable cultural relics."[18] 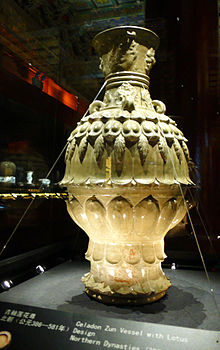 The ceramic collection of the Palace Museum represents a comprehensive record of Chinese ceramic production over the past 8,000 years, as well as one of the largest such collections in the world.[10] 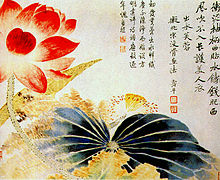 The Palace Museum holds close to 50,000 paintings. Of these, more than 400 date from before the Yuan Dynasty (1271–1368). This is the largest such collection in China and includes some of the rarest and most valuable paintings in Chinese history.[19]

The collection is based on the palace collection in the Ming and Qing Dynasties. The personal interest of Emperors such as Qianlong meant that one of the most important collections of paintings in Chinese history was held at the palace. However, a significant portion of this collection was lost. After his abdication, Puyi transferred paintings out of the palace, and many of these were subsequently lost or destroyed. In 1948, some of the best parts of the collection were moved to Taiwan. The collection has since been gradually replenished, through donations, purchases, and transfers from other museums.

Bronze holds an important place in Chinese culture, and was always an important part of state ceremony. The Palace Museum's bronze collection dates from the early Shang Dynasty. Of the almost 10,000 pieces held, about 1600 are inscribed items from the pre-Qin period (to 221 BC). A significant part of the collection is ceremonial bronzeware from the imperial court, including complete sets of musical instruments used by the imperial orchestras.[20]

The Palace Museum has one of the largest collections of mechanical timepieces of the 18th and 19th centuries in the world, with more than 1,000 pieces. The collection contains both Chinese- and foreign-made pieces. Chinese pieces came from the palace's own workships, Guangzhou (Canton) and Suzhou (Suchow). Foreign pieces came from countries including Britain, France, Switzerland, the United States and Japan. Of these, the largest portion come from Britain.[21]

Notable pieces in the collection include a clock with an attached automaton which is able to write, with a miniature writing brush on inserted paper, an auspicious couplet in perfect Chinese calligraphy.[22]

Jade has a unique place in Chinese culture.[23] The Museum's collection, mostly derived from the imperial collection, includes some 30,000 pieces. The pre-Yuan Dynasty part of the collection includes several pieces famed throughout history, as well as artefacts from more recent archaeological discoveries. The earliest pieces date from the Neolithic period. Ming Dynasty and Qing Dynasty pieces, on the other hand, include both items for palace use, as well as tribute items from around the Empire and beyond.[24]