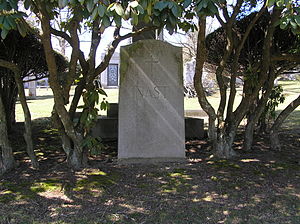 The grave of Condé Nast in Gate of Heaven Cemetery

Condé Montrose Nast (March 26, 1873 – September 19, 1942) was the founder of Condé Nast Publications, a leading American magazine publisher known for publications such as Vanity Fair, Vogue and The New Yorker.

Named for his uncle Condé L. Benoist, Condé Montrose Nast was born in New York City to a family of Midwestern origin. His father, William F. Nast (son of the German-born Methodist leader William Nast) was an unsuccessful[citation needed] broker and inventor who had also served as U.S. attaché in Berlin. His mother, the former Esther A. Benoist, was a daughter of pioneering St. Louis banker Louis Auguste Benoist and a descendant of a prominent French family that emigrated to Canada and thence to Missouri.

He had three siblings: Louis, Ethel, and Estelle.

Nast's aunt financed his studies at Georgetown University, where he graduated in 1894. He went on to earn a law degree from Washington University in St. Louis in 1897.

Nast did not take well to law, and upon graduation he got a job working for a former classmate as advertising manager for Collier's Weekly (1898–1907). Over the course of a decade he increased the advertising revenue 100-fold. He published books and Lippincott's Monthly Magazine with Robert M. McBride (McBride, Nast & Co.). After leaving Collier's Nast bought Vogue, then a small New York society magazine, transforming it into America's premier fashion magazine.

He then turned Vanity Fair into a sophisticated general interest publication, with the help of his friend Frank Crowninshield, who was editor and a major influence for more than 20 years. It published many new and high quality writers, as well as displaying reproductions of modern art.

Nast eventually owned a stable of magazines that included House & Garden, British, French, and Argentine editions of Vogue, Jardins des Modes, and Glamour (the last magazine added to the group while he was alive). While other publishers simply focused on increasing the number of magazines in circulation, Nast targeted groups of readers by income level or common interest. Among his staffers were Edna Woolman Chase, who served as the editor in chief of Vogue; and Dorothy Parker and Robert Benchley.

Nearly ruined in the Great Depression as many others were, Nast spent his last years struggling to regain his early prosperity. 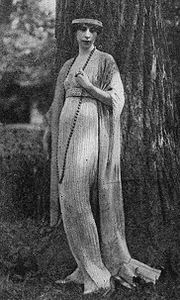 Nast was married twice. His wives were:

The footstone of Condé Nast in Gate of Heaven Cemetery

Condé Nast died in 1942 and is interred at Gate of Heaven Cemetery in Hawthorne, New York. His grave is located in Section 25 of the cemetery, near Babe Ruth and Billy Martin.[8][9]