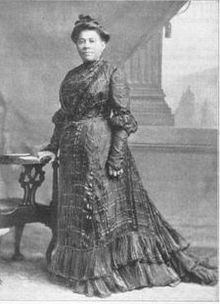 Mary Burnett Talbert (September 17, 1866 – October 15, 1923) was an American orator, activist, suffragist and reformer. Called "the best known Colored Woman in the United States," Talbert was among the most prominent African Americans of her time.

Mary Morris Burnett Talbert was born and raised in Oberlin, Ohio in 1866. As the only African-American woman in her graduating class from Oberlin College in 1886, Burnett received a Bachelor of Arts degree, then called an S.P. degree. She entered the field of education, becoming assistant principal of the Union High School in Little Rock, Arkansas in 1887, the highest position held by an African-American woman in the state. In 1891 she married William H. Talbert, moved to Buffalo, New York, and joined Buffalo's historic Michigan Avenue Baptist Church.

Talbert earned a higher education degree at a time when a college education was controversial for European-American women and extremely rare for African-American women. When women's organizations were segregated by race, Talbert was an early advocate of women of all colors working together to advance their cause, and reminded white feminists of their obligations towards their less privileged sisters of color.

Described by her peers as "the best-known colored woman in the United States," Talbert used her education and prodigious energies to improve the status of Black people at home and abroad. In addition to her anti-lynching and anti-racism work, Talbert supported women's suffrage. In 1915 she spoke at the "Votes for Women: A Symposium by Leading Thinkers of Colored Women" in Washington, D.C.

As a founder of the Niagara Movement, Talbert helped to launch organized civil rights activism in America. The Niagara Movement was radical enough in its brief life to both spawn and absorb controversy within the Black community, preparing the way for its successor, the National Association for the Advancement of Colored People (NAACP). Central to the efforts of both organizations, Mary Talbert helped set the stage for the civil rights gains of the 1950s and '60s.

Talbert's long leadership of women's clubs helped to develop Black female organizations and leaders in communities around New York and the United States. Women's clubs provided a forum for African-American women's voices at a time when they had restricted opportunities in public and civic life. In both Black and white communities, women's clubs fostered female leadership.

As a historic preservation pioneer, Talbert saved the Frederick Douglass home in Anacostia, D.C. after other efforts had failed.

Buffalo's 150-year-old Michigan Avenue Baptist Church, to which the Talbert family belonged, has been named to the United States National Register of Historic Places. Many prominent African Americans worshipped or spoke there. The church also had a landmark role in abolitionist activities. In 1998, a marker honoring Talbert, who served as the church's treasurer, was installed in front of the Church by the New York State Governor's Commission Honoring the Achievements of Women.

In October 2005, Talbert was inducted into the National Women's Hall of Fame in Seneca Falls, NY. She is also remembered around the United States as the namesake of clubs and buildings.

Talbert died on October 15, 1923 and is buried in Forest Lawn Cemetery (Buffalo). A small collection of Talbert family papers survives in the library collection of the Buffalo and Erie County Historical Society.[1]

The period in United States history commonly referred to as the Progressive Era spanned from 1890-1920. It represented a progressive shift in what Axinn and Stern (2005) refer to as “the lines between the countryside and the city, between workers and the middle class, between foreigners and native-born, and between men and women” (Axinn & Stern, 2005, p. 127). Not mentioned in this shift is the gruesome treatment of African-Americans under the Southern “Jim Crow” laws which excluded Blacks from political, economic, public, and educational spheres of influence.

These measures represented a tightening of oppressive politics and an era of social subservience, which arguably lasts into the present time. Discriminatory efforts took shape in black segregation in white social settings and strategically limiting Blacks right to vote with a combination of the grandfather clause, poll taxes and violent efforts at voting sites (Woloch & Johnson, 2009). Progressive era political reform was seen as necessary, but changing the attitudes and actions toward Blacks in the South was not on this political agenda.

The hostile environment of the South combined with the loss of jobs and the threat of lynching, encouraged the migration of many Blacks to the north. It is estimated that from 1890 to 1910, roughly 200,000 African Americans left the South and this number continued to increase during World War I (Woloch & Johnson, 2009). The move north represented employment opportunities in the textile industry, in large factories, automobile production and the famed meat packing industry of New York, but were still not from the harassment and discrimination that characterized this period of being Black in America. Axinn and Stern (2005) surmise that “the Black population was generally unaffected by reform activities and the social welfare benefits that resulted from them. In an era marked by economic progress and social mobility, the group remained poor and powerless” (Axinn & Stern, 2005, p. 132).

Despite the bleak picture painted by Axinn and Stern, African-American leadership was not at a shortage and “powerless” certainly does not describe the Black pioneers of this era. Notable Black change agents including Booker T. Washington, W.E.B. Du Bois, Ida B. Wells and Mary McLeod Bethune helped lead the fight for Black equality and opportunity. Similarly influential but less well noted activists include Mary Church Terrell, Nannie Helen Burroughs and Mary Morris Burnett Talbert, who is a noted international activist, educator, leader and social reformer. In a 1916 speech Talbert states, “no Negro woman can afford to be an indifferent spectator of the social, moral, religious, economic, and uplift problems that are agitated around [her]” (Williams, 1994). Her life’s work embodies these principles of dedication and hard work to improve the plight of Blacks and all people during this era.

A Summary of Mary Talbert's Accomplishments

Hallie Quinn Brown (1999), having the opportunity to befriend Mary Talbert, details a personal side of this phenomenal woman stating, "Mrs. Talbert possessed a kind, thoughtful, generous nature. She did not hesitate to do the smallest deed to the humblest person in any possible way. For if one does not possess these qualities in the small things in life she can never fully expand to the greater ones. Her personality was most charming, her smile an object of beauty. She possessed a ready and versatile tongue and pen. A letter from her was almost equal to a face to face conversation. She was at once graceful and gracious. By her ability, her oratory and her pleasing personality, she held the undivided attention of an audience…”(The New York Public Library - Hallie Q. Brown, 1999).

Capturing the attention of an audience was not limited to Talbert’s speaking engagements; some of her most formidable actions came in the form of letters detailing the strategy and philosophy behind movements such as the anti-lynching crusade. In a 1922 letter printed in the Crisis magazine, Talbert outlines the urgency of the National Association of Colored Women's Clubs commitment to an anti-lynching campaign that did not divide among racial lines. In the opening lines she asserts: “The hour has come in America for every woman, white and black, to save the name of her beloved country from shame by demanding that the barbarous custom of lynching and burning at the stake be stopped now and forever” (Talbert, 1922).

Lobbying the support of white woman’s organizations, Talbert recognized the human element in lynching that extended beyond race to basic human rights. Her efforts were bold and likely dangerous as she elicited the contributions of Jewish women and Christian women in what she labeled “American womanhood…working for one particular objective…” (Talbert, 1922). She was well respected in the community of female leaders and Mary White Ovington, also influential in the Nation Association for the Advancement of Colored People, expressed to the National Women’s Party that “Mrs. Talbert is able, liberal in thought, and perhaps the best known colored woman in the United States today” (Ovington, 1920).

Although Talbert was well received in some organizational circles, there were other venues that despite her recognition and champion for women’s rights, she was still judged by the color of her skin. Mary Jane Brown (2000) highlights Talbert’s official 1920 trip to Europe to attend the International Council of Women in Christiana, Norway as a delegate. In Paris, Talbert was with three other white female delegates and was not allowed into a dining room for breakfast because of her race. In every other country on this tour she was treated well, but not allowed to a tea sponsored by the YWCA in Paris (Brown, 2000, p. 39).

This slice of history raises numerous questions regarding the status of gender and race not only in the United States but in the international community. Talbert was well aware of national and international perceptions of her prominence and the ideological environment that she sought to advance. In a short essay titled “Women and Colored Women,” Mary Talbert offers her opinion of the gender and race dynamic in terms of women’s voting right by stating, "It should not be necessary to struggle forever against popular prejudice, and with us as colored women, this struggle becomes two-fold, first because we are women and second, because we are colored women. Although some resistance is experienced in portions of our country against the ballot for women, I firmly believe that enlightened men are now numerous enough everywhere to encourage this just privilege of the ballot for women, ignoring prejudice of all kinds…by her peculiar position the colored woman has gained clear powers of observation and judgment-exactly the sort of powers which are today peculiarly necessary to the building of an ideal country" (Talbert, 1915).

Mary Talbert was certainly a powerful woman who reflected a lasting commitment toward improving the social welfare of women and African-Americans. In 1922 her numerous accomplishments were recognized as she became the first black woman to receive the coveted NAACP’s Springarn Award, not only for her successful work in anti-lynching campaigns but her leadership in the Phyllis Wheatley Club of Colored Women, charter member status of the Empire Federation of Women's Clubs and her headship in preserving and restoring the Frederick Douglass Home in Anacostia as previously mentioned (Williams, 1993).