Parnon or Parnonas (Greek: Πάρνων/Πάρνωνας) or Malevo (Μάλεβο) is a mountain range, or massif, on the east of the Laconian plain and the Evrotas valley. It is visible from Athens above the top of the Argive mountains. The western part is in the Laconia prefecture and the northeastern part is in the Arcadia prefecture. The Parnon range separates Laconia from Arcadia. Its summit offers panoramic views of southeastern Arcadia and South Kynouria and much of Laconia that includes the northern and the central portions and reaches as far as the Taygetos mountains. It also views a part of the central Arcadia and the southern Argolis prefectures. It views the Myrtoan and the Laconian Gulfs. 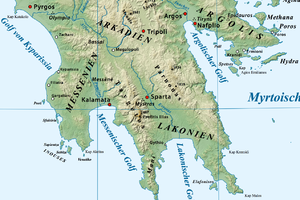 Location of Parnon to the east of the Eurotas Valley

In addition to the range of Parnon, two forelands can also be defined, east and west. Kynouria is located in the east foreland. In the west two lengths can be distinguished: from the northern flank of Parnon to Gkoritsa in Therapnes (on the road to Platanaki Pass), which is 6 km (3.7 mi) to 15 km (9.3 mi), and southward into the Malea Peninsula, 3 km (1.9 mi) to 9 km (5.6 mi) wide.

The nearest places are:

The Parnon range is predominantly limestone. The Mountain is home to the fifth deepest cave in Greece, the Peleta Sinkhole (depth as of 2006 is -543 m) and the impressive Vertical cave Propantes (-360m).