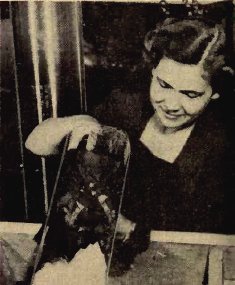 She was born in , , , and began her fashion career there at the age of 15 as a milliner, apprenticed under and Suzanne Talbot. She emigrated to the in 1924, settling in . On March 13, 1931, Daché married French-born . Their mutual love and successful supportive professional lives and collaboration endeared them to those around them.

Daché is reported to have said, "Glamour is what makes a man ask for your telephone number. But it also is what makes a woman ask for the name of your dressmaker." She was the most famous milliner in the United States during her time. So famous, in fact, that she was a mystery guest on a 1955 episode of the sophisticated television game show, "What's My Line." (Panelist Arlene Francis eventually guessed her identity.)

Her major contributions to milinery were draped s, brimmed hats molded to the head, half hats, visored caps for war workers, colored s, and romantic massed-flower shapes. By 1949, she was designing dresses to go with her hats, as well as , loungewear, gloves, hosiery, and a wired strapless . Both the designer and the hair stylist Kenneth worked for her before going into business for themselves.

Daché retired in 1968, and her New York millinery business was taken over by her daughter Suzanne Daché. Daché in 1940 won the Neiman-Marcus fashion award. She also won the first Coty American Fashion Critics Award for millinery in 1943. She died in , France.