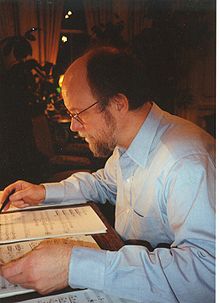 Charles Peter Wuorinen (born June 9, 1938) is a prolific Pulitzer Prize-winning American composer born and living in New York City. His catalog of more than 250 compositions includes works for orchestra, opera, chamber music, as well as solo instrumental and vocal works. In recent years he has dedicated attention to large scale works for the stage, including collaborations with Salman Rushdie and Annie Proulx.

Wuorinen was born on the Upper West Side of Manhattan in New York City. His father, John H. Wuorinen, was chairman of the History department at Columbia University and a noted scholar of Scandinavian affairs who also worked for the Office of Strategic Services and was the author of five books on his native Finland. His mother, Alfhild Kalijarvi received her MA in Biology from Smith College. Wuorinen excelled academically graduating from Trinity School (New York City) as valedictorian 1956 and received his Master’s Degree in Music from Columbia University in 1963. Wuorinen’s parents discouraged his pursuing a career in music. Early supporters included Jacques Barzun and Edgard Varèse.

Wuorinen began composing at age 5 and began piano lessons at 6. At sixteen he was awarded the New York Philharmonic's Young Composers' Award and the John Harms Chorus premiered his choral work O Filii et Filiae at Town Hall (2 May 1954). He was active as a performer, singer and pianist, with the choruses at the Church of the Heavenly Rest and the Church of the Transfiguration (Little Church Around The Corner), and was the rehearsal pianist for the world premiere production of Carlos Chavez's opera Panfilio and Lauretta at Columbia University during the Spring of 1957. From 1952-1956 Wuorinen was President of the Trinty School Glee Club. He was pianist, librarian and General Manager of the Columbia University Orchestra (1956-1957). During the summers of 1955 and 1956 has was the organist at Saint Paul's Church in Gardner, Massachusetss where his parents stayed during the summer months. He was awarded the Bearns Prize (3 times), the BMI Student Composers Award (4 times) and the Lili Boulanger Award. He was a fellow at the Bennington Composers Conference for several years. Many early professional performances of Wuorinen’s compositions took place on the Music of Our Time series at the 92nd Street Y run by violinist Max Pollikoff.

In 1962 Wuorinen and fellow composer-performer Harvey Sollberger formed The Group for Contemporary Music. The ensemble raised the standard of new music performance in New York, and championed the music of such composers as Milton Babbitt, Elliott Carter and Stefan Wolpe who wrote several works for the ensemble. Many of Wuorinen’s works were premiered by The Group, including Chamber Concerto for Cello and the Chamber Concerto for Flute. Major Wuorinen compositions of the 60’s include Orchestral and Electronic Exchanges premiered by the New York Philharmonic conducted by Lukas Foss, the First Piano Concerto, with composer as soloist, the String Trio written for the then newly formed new music ensemble Speculum Musicae and Time’s Encomium, Wuorinen’s only purely electronic piece composed using the RCA Synthesizer at the Columbia-Princeton Electronic Music Center under a commission from Nonesuch Records and for which Wuorinen was awarded the 1970 Pulitzer Prize for Music. Wuorinen was 32 when he was awarded the Pulitzer.

The 1970s was a particularly fruitful period for Wuorinen. Chamber works during this decade include his first two string quartets, the Six Pieces for Violin and Piano, Fast Fantasy for cello and piano and two large works for the Tashi ensemble, Tashi and Fortune. Works for orchestra include the Grand Bamboula for strings, A Reliquary for Igor Stravinsky which incorporates the elder master’s last sketches, the Second Piano Concerto and the Concerto for Amplified Violin and Orchestra which caused a scandal at its premiere at the Tanglewood Festival [1] with Paul Zukofsky and the BSO conducted by Michael Tilson Thomas. In 1976 Wuorinen completed his Percussion Symphony [2] a five movement work for 24 players including two pianos for the New Jersey Percussion Ensemble and his longtime colleague Raymond DesRoches, as well as his his opera subtitled ‘a baroque burlesque’, The W. of Babylon with an original libretto by Renaud Charles Bruce. In the late 70’s Wuorinen became interested in the work of the mathematician Benoit Mandelbrot and with a grant from the Rockefeller Foundation he conducted sonic experiments at Bell Labs in New Jersey. From an interview with Richard Burbank Wuorinen is quoted as saying,

What I did at Bell Labs (with Mark Liberman) was to try various experiments in which strings of pseudo-random material, usually pitches but sometimes other things, were generated and then subjected to traditional types of compositional organization, including twelve-tone procedures. What I wanted to do was to see whether or not these things sounded "composed," sounded purposively chosen. They did, at least by my lights. The random sequences were not just any old random sequences but were that of a kind called 1/f randomness.

The 1980s were framed by two large scale works for chorus and orchestra based on Biblical texts, the 60-minute oratorio The Celestial Sphere [3] for the 100th Anniversary of the Handel Oratorio Society in Rock Island Illinois of 1980 and Genesis of 1989 jointly commissioned by the Minnesota Orchestra and San Francisco Symphony. Other major orchestra works during this period include the Rhapsody for Violin and Orchestra, Third Piano Concerto written for pianist Garrick Ohlsson; Movers and Shakers the first work commissioned by the Cleveland Orchestra for music director Christoph von Dohnányi, Bamboula Squared for computer generated sound and orchestra (inspired by his work at Bell Labs), and The Golden Dance. Wuorinen was composer in residence with the San Francisco Symphony from 1984-1989. Major chamber works of the 80’s include his Third String Quartet commissioned to commemorate the 25th anniversary of the Hopkins Center for the Arts at Dartmouth College, The Blue Bamboula for pianist Ursula Oppens, the Sonata for Violin and Piano commissioned the Library of Congress and premiered at the Library on an all-Wuorinen concert, String Sextet, New York Notes, Third Piano Sonata for Alan Feinberg, and trios for various combinations including three works for horn trio. In the 1980s Wuorinen began an association with the New York City Ballet which resulted in a series of works designed for dance, Five (Concerto for Amplified Cello and Orchestra) for choreographer Jean-Pierre Bonnefoux and Wuorinen's longtime colleague and champion Fred Sherry, Delight of the Muses based on works of Mozart and commissioned in honor of the Mozart Bicentennial [4] and three works inspired by scenes from Dante’s la Divina Commedia for Peter Martins (The Mission of Virgil, The Great Procession and The River of Light). In addition to the Dante texts Wuorinen was influenced by the watercolors illustrations of William Blake. For New York City Ballet Wuorinen also made a two-piano arrangement of the Schoenberg Orchestra Variations choreographed by Richard Tanner, and Peter Martins created a ballet based on Wuorinen’s A Reliquary for Igor Stravinsky [5] In 1985 Wuorinen was awarded a MacArthur Foundation Fellowship.

Wuorinen devoted increased attention to writing works for the voice, these included his setting of Dylan Thomas’s A Winter's Tale for soprano Phyllis Bryn-Julson and the Fenton Songs I & II on poems of the British poet James Fenton with whom Wuorinen was collaborating on an opera. Major chamber works in the 1990’s included the Saxophone Quartet for the Raschèr Saxophone Quartet, Percussion Quartet, Piano Quintet, Sonata for Guitar and Piano. Orchestra works included the Concerto for Saxophone Quartet and Orchestra, Symphony Seven as well as the Dante works for the New York City Ballet.

With the turn of the century one of the major champions of Wuorinen’s music became James Levine, music director of the Metropolitan Opera and the then also the Boston Symphony Orchestra. Levine commissioned Wuorinen's Fourth Piano Concerto [6] for his first season as music director of the Boston Symphony Orchestra, and subsequently the tone poem Theologoumenon (a 60th birthday gift for Levine from his long-time manager Ronald Wilford) premiered by the Metropolitan Opera Orchestra and the Eighth Symphony: Theologoumena for the BSO. [7] Other champions of Wuorinen’s music include Peter Serkin for whom Wuorinen composed three concerti including Time Regained [8]" based on music of Machaut, Matteo da Perugia, Guillaume Dufay and Orlando Gibbons, the virtuosic solo Scherzo and the Second Piano Quintet with the Brentano Quartet another ensemble that Wuorinen has had a very fruitful relationship with and for whom he wrote his Fourth String Quartet. In 2004 the New York City Opera premiered his opera Haroun and the Sea of Stories [9] based on the novel of Salman Rushdie with libretto by James Fenton. Other works from this decade also include Cyclops 2000 for Oliver Knussen and the London Sinfonietta, Ashberyana, settings of John Ashbery, Spin5 a chamber concerto for violinist Jennifer Koh, Fourth Piano Sonata for Anne-Marie McDermott, Synaxis, Metagong and It Happens Like This a dramatic cantata on seven poems of James Tate premiered at Tanglewood with the composer conducting. [10] [11] Wuorinen is currently (2011) at work on an opera based on Annie Proulx’s Brokeback Mountain for which Proulx has written the libretto. Premiere is planned for January 2014 by the Teatro Real in Madrid.

Wuorinen has written more than 250 compositions to date. These include works is every genre, from instrumental solo to large scale opera. His newest works include It Happens Like This - a dramatic cantata on poems of James Tate, Marimba Variations commissioned by 21 players, Oros a solo for Ursula Oppens, Synaxis a sinfonia concertante for four soloists with strings and timpani, Scherzo a solo for Peter Serkin, Fourth Piano Sonata for Anne-Marie McDermott, Second Piano Quintet, and Metagong for two pianos and two percussion. He is presently (2011) at work on an opera on Annie Proulx’s Brokeback Mountain for the Teatro Real in Madrid. previous opera Haroun and the Sea of Stories based on the novel of Salman Rushdie with libretto by poet James Fenton was premiered by the New York City Opera in Fall 2004."[12]

Wuorinen is the author of Simple Composition. Wuorinen describes the book as

written by a composer and ... addressed to other composers — intending or actual, amateur or professional. Thus it is similar in intent to certain older books on the subject like Thomas Morley's A Plain and Easie Introduction to Practical Musicke (1597), for instance.... It outlines present practice, and while it can be used for purely didactic purposes, it can also be employed in composing "real" music.

Wuorinen has lectured at universities throughout the United States and abroad, and has served on the faculties of Columbia, Princeton, and Yale Universities, the University of Iowa, University of California (San Diego), Manhattan School of Music, New England Conservatory, State University of New York at Buffalo, and Rutgers University.

Wuorinen has also been active as a performer, a pianist and a conductor of his own works as well as other 20th-century repertoire. His orchestral appearances have included the Cleveland Orchestra, Chicago Symphony, New York Philharmonic, San Francisco Symphony, Los Angeles Philharmonic, and the American Composers Orchestra. He conducted the American, and later the West Coast, premieres of Morton Feldman's monodrama, Neither.

In 1962 he co-founded the Group for Contemporary Music, an ensemble dedicated to performance of new chamber music.[13] In addition to cultivating a new generation of performers, commissioning and premiering hundreds of new works, the Group has also been a model for similar organizations which have appeared in the United States since its founding.

His works have influenced a number of other composers. Robert Black cited Wuorinen as a particular influence on his own style of composition. Black also recorded Wuorinen's New York Notes.