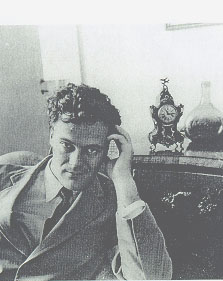 Robert Lowell (March 1, 1917&ndash;September 12, 1977), born Robert Traill Spence Lowell, IV, was an American whose works, confessional in nature, engaged with the questions of and probed the dark recesses of the self. He is generally considered to be among the greatest American poets of the twentieth century.

He was born in to a family that included the poets and . His mother, Charlotte Winslow, was a direct descendant of , a signer of the , Jonathan Edwards, the famed philosopher, , the Puritan preacher and healer, , , the second governor of Massachusetts, and "" passengers and his daughter . He was at , a prominent prep-school in Southborough, Mass, before attending for two years and transferring to in Gambier, Ohio, to study under .

Lowell was a during and served several months at the federal prison in Danbury, Connecticut. During the 1960s he was active in the civil rights movement and opposed the US involvement in Vietnam. His participation in the October 1967 peace march in , and his subsequent arrest are described in the early sections of 's "The Armies of the Night".

Lowell suffered with and and was hospitalized many times throughout his life. He was married to novelist from 1940 to 1948. In 1949 he married the writer Elizabeth Hardwick. In 1970 he left Elizabeth Hardwick for the British author Lady . He spent many of his last years in England. Lowell died in 1977, having suffered a heart attack in a cab in New York City on his way to see Elizabeth Hardwick. He is buried in Stark Cemetery, .

Lowell's collected poems were published in 2003 and his letters in 2005, leading to a renewed interest in his work.

He reached wide acclaim for his 1946 book, "Lord Weary's Castle", which included ten poems slightly revised from his earlier "Land of Unlikeness", and thirty new poems. Among the better known poems in the volume are "Mr Edwards and the Spider" and "." "Lord Weary's Castle" was awarded the in 1947. Lowell's early poems are formal, ornate, and concerned with violence and theology; a typical example is the close of "The Quaker Graveyard" -- "You could cut the brackish winds with a knife / Here in Nantucket and cast up the time / When the Lord God formed man from the sea's slime / And breathed into his face the breath of life, / And the blue-lung'd combers lumbered to the kill. / The Lord survives the rainbow of His will."

"The Mills of the Kavanaughs" (1951) did not receive similar acclaim, but Lowell was able to revive his reputation with "" (1959). The poems in this book were written in a mix of free and metered verse, with much more informal language than he used in his first two books. It marked both a big turning point in Lowell's career, and a turning point for in general. Because many of the poems documented details from Lowell's family life and personal problems, one critic, M.L. Rosenthal, labeled the book "confessional." For better or worse, this label stuck. Lowell's editor and friend notes in his afterword to Lowell's "Collected Poems," "Lowell is widely, perhaps indelibly associated with the term 'confessional,'" though Bidart questions the accuracy of this label. [ Bidart, Frank, editor. "On Confessional Poetry." "Robert Lowell Collected Poems". New York: Farrar, Straus, and Giroux, 2003.]

Lowell followed "Life Studies" with "Imitations", a volume of loose translations of poems by classical and modern European poets, including , , , , and , for which he received the 1962 Bollingen Poetry Translation Prize.

His next book "For the Union Dead", 1964, was also widely praised, particularly for its title poem, which invokes 's "Ode to the Confederate Dead." In "Near the Ocean", which followed a couple of years later, Lowell had returned to stanzaic forms. The best known poem in this volume, "Waking Early Sunday Morning," is written in eight-line stanzas borrowed from 's poem "Upon Appleton House."

During 1967 and 1968 he experimented with a verse journal, published as "Notebook, 1967-68". These fourteen-line poems loosely based on the form were reworked into three volumes. "History" deals with public history from antiquity onwards, and with modern poets Lowell had known; "For Lizzie and Harriet" describes the breakdown of his second marriage; and "The Dolphin", which won the 1974 , includes poems about his marriage to and their life in England.

A minor controversy erupted when he incorporated private letters from his second wife, into "For Lizzie and Harriet". He was particularly criticized for this by his friends and .