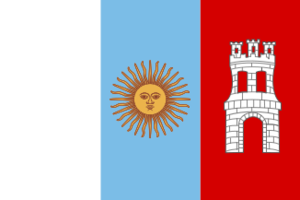 Córdoba is a province of , located in the center of the country. Its capital, Córdoba, is the second largest city in the country.Neighboring provinces are (clockwise from the north): Santiago del Estero, Santa Fe, Buenos Aires, , San Luis, La Rioja and Catamarca.

Together with Santa Fe and Entre Ríos, the province is part of the economico-political association known as the Center Region.

Before the Spanish conquest a few different tribes lived in the region now called Córdoba Province, most notably the Comechingones and Sanavirones.

Once settled in Alto Perú, the Spaniards searched for a route to the port in the to transport the Peruvian gold and silver to .

"Córdoba de la Nueva Andalucía" (nowadays Córdoba) was founded as a middle point on that route on , by .The "Colegio Convictorio de Nuestra Señora de Monserrat", founded by the Jesuits in 1599, became the in 1622, being the first one in Argentina. The city continued growing as an important cultural center supported by the traffic of precious metals from Perú. In 1761 a was installed in the University.

In , seven years after the consolidation of the , the Intendency of Córdoba became the capital of what now includes the La Rioja, Mendoza, San Juan and , dividing the former Tucumán Intendency in two. was its first governor, when Córdoba City had 38,800 inhabitants.

After the in , governor Gutiérrez de la Concha joined a meeting that decided to ignore the authority of the Buenos Aires Junta. Ortiz de Ocampo attacked the city and executed the leaders of the opposition, among whom was , leader of the resistance during the .

Under the hand of , and especially after 1820, Córdoba and Buenos Aires started a struggle for the organization of the Nation that had, by that time, neither legislative nor executive branches. Córdoba pleaded for a federal organization of the provinces while Rivadavia pretended a centralised government in .For 15 years the province was submerged in internal revolts that started to stabilize in 1868 under the provisional government of .

During the presidency of Sarmiento an astronomic observatory (1871) and the Faculty of Physic Sciences and Mathematics (1873) were inaugurated.

Córdoba had a second population growth due to the immigration attracted by the arrival of the railways. From 1887 on, several agricultural colonies (San Francisco, , etc) emerged, while former rest-point Fraile Muerto (), Ferreira () and Los Luceros (Río Segundo), on the route to Buenos Aires, became agricultural, commercial and industrial centers respectively.

The University Reform movement, which originated in Córdoba in 1918, not only influenced the rest of the country but the rest of . Modernization of the curricular contents and the improvement of the students' rights were the main achievements of the movement.

After , many foreign workers and workers from other provinces in Argentina were seduced by Córdoba's industrial development, which grew thanks to the expansion of the car industry and its deviates. During 's presidency (1958–1962), most new auto industries settled in the city of Córdoba and its surroundings.

As in the rest of the country, Peronist groups emerged in 1955 after the coup that took out of office. These Peronist groups, together with other socialist and anarchist groups, started opposing Argentina's third military dictatorship not long after its 1966 takeover resulted in massive arrests of academics, psychologists and other non-violentintellectuals. Worker and student participation of politics grew due to the popular discontent with the appointed governor's heavy-handedness, culminating in the violent May, 1969, popular revolt known as the "". This revolt, mirrored by the "" and others in several parts of the country, undermined the power of dictator Onganía and ultimately caused him to be driven out of office by more moderate military factions.

Cordoba has continued to prosper, despite left-wing violence in 1973, right-wing political interference in 1974, government atrocities in 1976-77, 1978-81 "" policies that battered Cordoba's sizable industrial sector, the 1980s debt crisis and, of course, the recent acute financial crisis.

Cordoba's economy is the third largest in Argentina, behind only the and the city of , itself. Cordoba's economy was estimated at US$27.7 billion in 2006 and has long contributed about 8% of the nation's GDP. Its per capita income (US$9,040) is slighly above the national average. [ [http://www.iader.org.ar/ I.A.D.E.R ] ]

Agriculture and livestock provide 10% of the province's output,

Mining includes many different minerals, and construction material such as and lime. is also extracted to feed the three Argentine atomic plants.Tourism, as in the rest of Argentina, is a growing industry favored by the mild weather, a number of small rivers, and low height green hills. Around 3 million tourists from the rest of Argentina and other countries visit Córdoba every year. The province has 500,000 hotel beds, including hostels, tourist farms and other types of accommodation. Important festivities include the Cosquín National Folk Music, and Jesús María Folk and Taming Festivals.

Córdoba is connected by rail with Buenos Aires, Rosario, Mendoza and Tucumán. The , known as Pajas Blancas, handles international and domestic air traffic, while the handles only domestic flights.

Córdoba has a unicameral legislature elected by universal suffrage. Until December 2001, the legislature was bicameral (a Chamber of Deputies and a Senate), but following the 2001 constitutional reform, this division was abolished. The unified legislature is made up of 70 members: 26 elected to represent each of the provincial departments, and 44 elected by the people of the province as a whole and assigned by a proportional system. [ [http://cervantesvirtual.com/servlet/SirveObras/01361675380139723644802/index.htm Constitution of the Province of Córdoba] (14 September 2001). Biblioteca Virtual Miguel de Cervantes. es icon]

Córdoba has long been a bastion of the , but in 1999 the Justicialist was elected governor, succeeded by fellow Peronist in 2007.

The province is divided in 26 departments ( _es. departamentos) here listed with their head towns.