Lindos (in Greek: Λίνδος) is an archaeological site, a town and a former municipality on the island of Rhodes, in the Dodecanese, Greece. Since the 2011 local government reform it is part of the municipality Rhodes, of which it is a municipal unit.[1] It lies on the east coast of the island. It is about 55 km south of the town of Rhodes and its fine beaches make it a popular tourist and holiday destination. Lindos is situated in a large bay and faces the fishing village and small resort of Haraki.

Above the modern town rises the acropolis of Lindos, a natural citadel which was fortified successively by the Greeks, the Romans, the Byzantines, the Knights of St John and the Ottomans. This makes the site difficult to excavate and interpret archaeologically. The acropolis offers spectacular views of the surrounding harbours and coastline.

The restored stoa; Acropolis of Lindos.

Lindos was founded by the Dorians led by the king Tlepolemus of Rhodes, who arrived in about the 10th century BC. It was one of six Dorian cities in the area known as the Dorian Hexapolis. The eastern location of Rhodes made it a natural meeting place between the Greeks and the Phoenicians, and by the 8th century Lindos was a major trading centre. Its importance declined after the foundation of the city of Rhodes in the late 5th century.

In classical times the acropolis of Lindos was dominated by the massive temple of Athena Lindia, which attained its final form in around 300 BC. In Hellenistic and Roman times the temple precinct grew as more buildings were added. In early medieval times these buildings fell into disuse, and in the 14th century they were partly overlaid by a massive fortress built on the acropolis by the Knights of St John to defend the island against the Ottomans.

View of the castle. 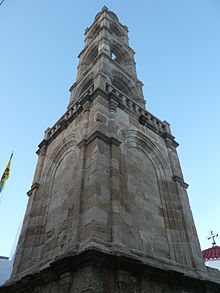 The belltower of Panagia Church.

On the acropolis of Lindos today parts of the following buildings may still be seen:

Some scenes of the well-known film, The Guns of Navarone, were filmed here. 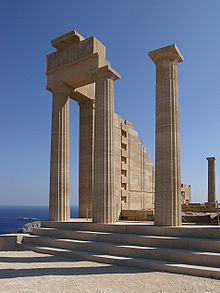 Excavations were carried out at Lindos in the years 1900 to 1914 by the Carlsberg Institute of Denmark, directed by K.F. Kinch and Christian Blinkenberg. The acropolis site was excavated down to bedrock and the foundations of all the buildings were uncovered.

During the Italian occupation of the island (1912–1945) major restoration work was carried out on the Lindos acropolis, but it was poorly done and was harmful to the historic record. The north-east side of the Temple of Athena was restored. The monumental staircase to the propylaea was rebuilt and many of the columns of the Hellenistic stoa were re-erected. Large surfaces were covered with concrete. Bases and inscribed blocks were taken from their locations and placed along the restored walls.

Judged by modern standards, this work took insufficient note of the evidence available from the excavations and in its methods did damage to the remains themselves. In recent years Greek and international archaeologists under the supervision of the Greek Ministry of Culture have been working to restore and protect the ancient buildings on the site. 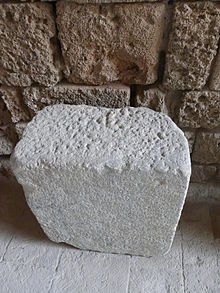