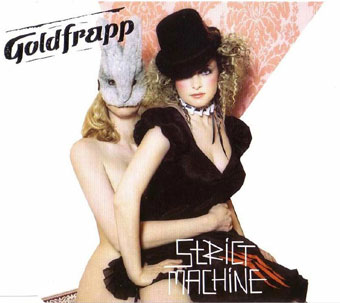 
"Strict Machine" is an song written by British group and Nick Batt for their second studio album "Black Cherry" (2003). It was produced by Goldfrapp and describes laboratory rats in experiments. [Benson, Richard. [http://www.telegraph.co.uk/arts/main.jhtml?xml=/arts/2008/02/02/sm_goldfrapp02.xml "Alison Goldfrapp: ethereal girl"] . "". 2 February 2008. Retrieved 28 September 2008.] read in a newspaper about experiments in which scientists stimulated rats' brains so that the rats would feel joy when following commands. She was inspired to write "Strict Machine" based on images of the experiment and "more human aspects of machines and sex and control." [ [http://www.artistinterviews.com/subscriptions/music/goldfrapp.htm "Electronica Duo Goldfrapp About 'Black Cherry'"] . "Artist Interviews". April 2003. Retrieved 28 September 2008.]

The song was released as the album's second single in July 2003 (see ). It received a positive reception from music s and became the band's second single to appear in the top thirty on singles charts in the United Kingdom. In May 2004, the song was re-issued under the title "Strict Machine '04" and became Goldfrapp's first top twenty single in the UK. In the , "Strict Machine" was released to success on the "Billboard" dance charts, where it reached the top position on the Dance Club chart and number three on the chart. The song won the dance award at the 49th . [ [http://www.ascap.com/eventsawards/awards/ivors/2004/ "ASCAP Members Honored At The Ivors"] . . Retrieved 28 September 2008.]

On 30 June 2003, "Strict Machine" was released in the United Kingdom. The song became Goldfrapp's second top thirty single when it debuted at number twenty-five on the singles chart, and spent a total of six weeks in the top seventy-five. The song was re-released on 26 April 2004 under the name "Strict Machine '04" and surpassed it previous chart position in the UK by recharting at number twenty, becoming Goldfrapp's first top twenty single.

Outside of the UK, the song was also successful. It reached number twenty-six in and became Goldfrapp's first single release to chart in the country. Although the single sold considerably, "Strict Machine" did not chart on the Canadian BDS Airplay chart, receiving most of its sales from its fans in the dance clubs. In , the song peaked at number eighty and would remain as Goldfrapp's only single to chart in the country until the release of "Ooh La La" in 2005.

The music video was directed by . The settings' architecture is inspired by the work of . [Zappaterra, Yolanda. "Short range". "", volume 19, issue 45, page 21. 4 November 2004.] Goldfrapp and her back-up dancers were filmed in London against a . The animated sequences were done by Odell's studio in , . ["Nexus creates kaleidoscope promo for Goldfrapp". "Televisual". 1 August 2003.]

Use of the song

*"Wonderful Electric", Goldfrapp's concert tour in support of "Black Cherry", was named after lyrics in the song.