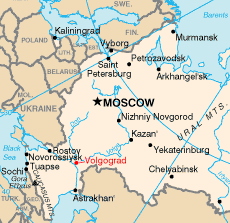 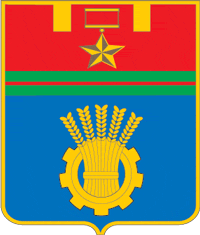 Volgograd (audio-ru|Волгогра́д|ru-Volgograd.ogg), formerly called Tsaritsyn (audio-ru|Цари́цын|ru-Tsaritsyn.ogg) (1598–1925) and Stalingrad (audio-ru|Сталингра́д|ru-Stalingrad.ogg) (1925–1961) is a city and the administrative center of , . It is 80 kilometres long, north to south, situated on the western bank of the .

Volgograd originated with the foundation in 1589 of the fortress of Tsaritsyn at the confluence of the Tsaritsa and s. The fortress, which took its name from the local name "Sary Su" ("Yellow Water/River" in the ), was established to defend the unstable southern border of Tsarist Russia and became the nucleus of a trading settlement. It was captured twice by rebels, under in the rebellion of 1670 and in 1774. Tsaritsyn became an important river port and commercial centre in the 19th century.

The city was the scene of heavy fighting during the . forces occupied it during 1918, but were attacked by White forces under . During the the Bolsheviks were pushed back and surrounded at first, and only the actions of , then local chairman of the military committee, saved the city for the Bolsheviks. Stalin did so by recalling 's 'Steel Division' from the which attacked the White Forces in the rear. In honor of Stalin's efforts in defending the city, it was renamed "Stalingrad" (literally: "Stalin city") in 1925. The name change is typical of the way towns and cities were re-named after Bolshevik leaders and heroes during Soviet times. (See also .)

Under Stalin, the city became heavily industrialized and was developed as a centre of heavy industry and trans-shipment by rail and river. During (), the city of Stalingrad became the center of the as well as the pivotal turning point in the war against Germany. The battle lasted from , to , . 1.7 million to 2 million Axis and Soviet soldiers were either killed, wounded or captured, as well as over 40,000 civilians killed. The city was reduced to rubble during the fierce fighting, but reconstruction began soon after the Germans were expelled from the city.

For the heroism shown during the battle, Stalingrad was awarded the title in 1945, and King awarded the citizens of Stalingrad a jeweled in appreciation of the bravery that they had shown. A memorial complex commemorating the battle, dominated by an immense of Mother Russia, was erected on the , a hill that saw some of the most intense fighting during the battle. A number of cities around the world (especially ones that had suffered particularly badly during the war) established sister/friendship/twinning links (see list below). It was part of the world's first such link when it formed a twinning relationship with the English city of during (as both suffered heavy bombing).The Panorama museum, which is located alongside the Volga river, contains artifacts from World War II. These include a panoramic painting of the battlefield from the location of the monument "Mamayev Kurgan." Here a rifle of the famous sniper , can also be found.

In 1961, the city's name was changed to Volgograd ("Volga City") as part of 's programme of . This was and remains somewhat contentious, given the fame of the name Stalingrad, and there were once serious proposals to change the name back during 's brief administration in 1985. There is still a strong degree of local support for a reversion and proposals have been made from time to time, though as yet none have been accepted by the Russian government.

Modern Volgograd is still an important industrial city. Its industries include , , and production, manufacture of machinery and vehicles, and chemical production. A large stands a short distance to the north of Volgograd.

Volgograd is a major railway junction with links to , the region of , the , and . It stands at the east end of the , opened in 1952 to link the two great rivers of .

, the longest European route connecting , with Ridder, , passes through Volgograd.

Volgograd's public transport system includes a service known as the .

As of , Volgograd had 20 sister cities