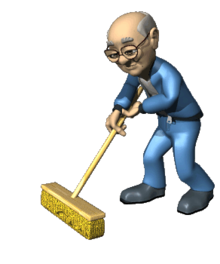 A janitor or custodian (called caretaker in British English but also janitor in Scottish English, see American and British English differences) is a professional who takes care of buildings, such as hospitals and schools. Janitors are responsible primarily for cleaning, and often (though not always) some maintenance and security. Similar but more managerial duties (and usually not including cleaning, for example) are performed by a superintendent, often called building superintendent.

Office cleaning staff perform many of the same duties as janitors, however the tasks are divided among different members. Additional tasks include:

Office cleaning often takes place after hours or later in the evening or even overnight.

Cleaning is one of the most commonly outsourced services. Some of the reasons for this include: