The show team flies 11 CT-114 Tutors—nine for aerobatic performances, including two solo aircraft, and two as spares, flown by the team coordinators. Approximately 80 Canadian Forces personnel work with the squadron full-time; 24 personnel are in the show team that travels during the show season. The Snowbirds are the only major military aerobatics team that operates without a support aircraft.[4]

The Snowbirds continue the flying demonstration tradition of previous Canadian air force aerobatic teams, which include the Siskins, the Blue Devils, the Golden Hawks, and the Golden Centennaires.

Although 431 Air Demonstration Squadron was formed in 1978, its history truly begins during the Second World War when as part of the Commonwealth contribution to aircrew for the war in Europe 431 (Iroquois) Squadron Royal Canadian Air Force was created under the control of RAF Bomber Command.[5]

No. 431 Squadron formed on 11 November 1942, at RAF Burn (in North Yorkshire), flying Wellington B.X medium bombers with No. 4 Group RAF Bomber Command. The squadron moved to RAF Tholthorpe in mid-1943 as part of the move to bring all RCAF squadrons into one operational group - No. 6 Group RCAF - and converted to Halifax B.V four-engined heavy bombers. In December 1943 the squadron moved to RAF Croft where it was re-equipped with Halifax III's and later, Lancaster B.X aircraft. The squadron moved to RCAF Station Dartmouth, Nova Scotia after the war, disbanding there on 5 September 1945.

No. 431 (Fighter) Squadron re-formed at RCAF Station Bagotville on 18 January 1954, using the new Canadair F-86 Sabre. The squadron was formed on a temporary basis until there were enough new CF-100s available to fulfill RCAF squadron needs. No. 431's duties included aerial combat training and displaying the capabilities of jet operations to the public at air shows, the largest being Operation Prairie Pacific: a 50-minute exhibition that travelled to selected locations across western Canada. The team consisted of four Sabres and a solo aircraft. This was the first Sabre team to be authorized to perform formation aerobatics in Canada.[6] The unit was disbanded on 1 October 1954.

CT-114 Tutor of the Snowbirds

In 1969, Colonel O.B. Philp, Base Commander of CFB Moose Jaw and former leader of the Golden Centennaires aerobatic team, considered using several of the leftover Golden Centennaire CT-114 Tutor aircraft which were still fitted for aerobatic flying. These Tutors had some minor corrosion and had been painted with white anti-corrosive paint. Philp, at this point, did not receive approval to form the new team; however, approval had been given for single Tutors to provide simple flypasts at local pro football games. To further the cause of an aerobatic team, Philp began informal enhanced formation practice for the instructors at 2 Canadian Forces Flying Training School with the aim of providing multi-aircraft flypasts at special events. In 1970, four-aircraft formations began providing flypasts at fairs and festivals, as well as Armed Forces Day at CFB Moose Jaw. In July 1970, a white Tutor was introduced to the formation for flypasts. Four white Tutors were finally flown together at the Abbotsford Air Show, followed by a flypast in Winnipeg. Known as the 2 Canadian Forces Flying Training School Formation Team, or informally as the Tutor Whites , the team grew in size to seven aircraft in 1971 using eleven pilots, and gradually gained recognition. Formation flypasts were replaced with more complicated manoeuvres, and more aircraft were added as the team matured.

A contest to give the air demonstration team a formal name was held at the CFB Moose Jaw base elementary school (Bushell Park Elementary) and resulted in the name Snowbirds. The name reflected the aircraft's distinctive mostly-white paint scheme used at the time, connoted grace and beauty and was clearly linked to its Canadian origins. Coincidentally, "Snowbird" was the name of an Anne Murray hit song that was popular at the time.[7] The name was formally adopted on 25 June 1971. The Snowbirds were officially authorized to be designated the Canadian Forces Air Demonstration Team on 15 January 1975. The team was formed into its own squadron by reactivating 431 Squadron (renamed 431 Air Demonstration Squadron) on 1 April 1978. 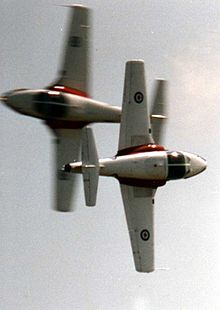 Formations and manoeuvres are designed each season by the team, and must be approved by the Canadian Forces, the Canadian Department of Transport and the United States Federal Aviation Administration (FAA) to ensure safety guidelines are complied with. FAA approval is necessary since the team performs in the United States.

Three shows are designed: an unrestricted high show, a modified high show where loops are not permitted because of cloud, and a low show where low cloud conditions do not permit higher manoeuvres. Some elements of the show are passed down from one season to the next. These include the Canada burst, heart, downward bomb burst, and the solo head on crosses. Training occurs over several months. Once manoeuvres are mastered and the team is comfortable with the routine, the Snowbirds deploy to CFB Comox for specialized training. After approvals are obtained, an "acceptance show" is performed at Moose Jaw to allow representatives from the three approving agencies to see a live performance. The team will go on to perform shows throughout North America from May to October. The last show is performed at Moose Jaw.

The Snowbirds were the first aerobatic team in the world to use music in their show, and music is often used with live commentary from the performing pilots.[8]

On 8 June 1994, the Snowbirds were awarded the 1994 Belt of Orion Award for Excellence by Canada's Aviation Hall of Fame.

In September 1994, the Snowbirds were named the first ambassadors of the Canadian Injury Prevention Foundation (now Smartrisk), which aims to educate youth and adults about taking risks. 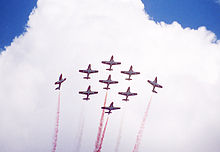 The Snowbirds flying their 1000th official show at CFB Edmonton (Namao), 20 May 1990. Colored smoke was used during major performances that year

On 16 October 1999, the squadron was presented their Squadron Colours for 25 years of service. During the same ceremony the team was presented the 1999 Golden Hawks Award by the Air Force Association of Canada for outstanding performance in the field of Canadian military aviation.

In 2002, the Snowbirds were named ambassadors of the Ch.i.l.d. Foundation (Children with Intestinal and Liver Disorders Foundation). 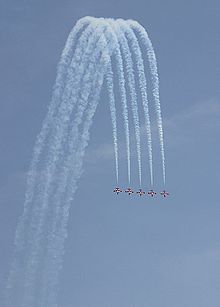 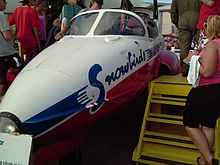 Snowbird aircraft have been involved in many accidents, including several mid-air collisions, resulting in the deaths of seven pilots and one passenger and the loss of several aircraft.