Sildenafil citrate, sold as Viagra, Revatio and under various other trade names, is a drug used to treat erectile dysfunction and pulmonary arterial hypertension (PAH). It was originally developed by British scientists and then brought to market by the US-based pharmaceutical company Pfizer.[1] It acts by inhibiting cGMP-specific phosphodiesterase type 5, an enzyme that delays degradation of cGMP, which regulates blood flow in the penis. Since becoming available in 1998, sildenafil has been the prime treatment for erectile dysfunction; its primary competitors on the market are tadalafil (Cialis) and vardenafil (Levitra).

People on antidepressants may experience sexual dysfunction, either as a result of their illness or as a result of their treatment. A 2003 study showed that sildenafil improved sexual function in men in this situation.[3] Following up to earlier reports from 1999,[4] the same researchers found that sildenafil was able to improve sexual function in female patients on antidepressants as well.[5]

As well as erectile dysfunction, sildenafil citrate is also effective in the rare disease pulmonary arterial hypertension (PAH). It relaxes the arterial wall, leading to decreased pulmonary arterial resistance and pressure. This, in turn, reduces the workload of the right ventricle of the heart and improves symptoms of right-sided heart failure. Because PDE-5 is primarily distributed within the arterial wall smooth muscle of the lungs and penis, sildenafil acts selectively in both these areas without inducing vasodilation in other areas of the body. Pfizer submitted an additional registration for sildenafil to the FDA, and sildenafil was approved for this indication in June 2005. The preparation is named Revatio, to avoid confusion with Viagra, and the 20-milligram tablets are white and round. Sildenafil joins bosentan and prostacyclin-based therapies for this condition.[6]

Sildenafil has been shown to be useful for the prevention and treatment of high-altitude pulmonary edema associated with altitude sickness such as that suffered by mountain climbers.[7][8] While this effect has only recently been discovered, sildenafil is already becoming an accepted treatment for this condition, in particular in situations where the standard treatment of rapid descent has been delayed for some reason.[9] 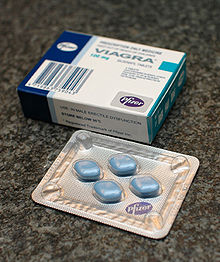 Viagra pills are blue and diamond-shaped with the word "Pfizer" engraved on one side, and "VGR xx" (where xx stands for "25", "50" or "100", the dose of that pill in milligrams) engraved on the other. The dose of sildenafil for erectile dysfunction is 25 mg to 100 mg taken not more than once per day between 30 minutes and 4 hours prior to sexual intercourse.

The dosage for pulmonary arterial hypertension (Revatio) is one 20 mg tablet three times a day. Revatio pills are white, round, film-coated tablets imprinted with "RVT 20" embossed on one side.[10]

In clinical trials, the most common adverse effects of sildenafil use included headache, flushing, dyspepsia, nasal congestion and impaired vision, including photophobia and blurred vision.[11] Some sildenafil users have complained of seeing everything tinted blue (cyanopsia).[12] Some complained of blurriness and loss of peripheral vision. In July 2005, the U.S. Food and Drug Administration found that sildenafil could lead to vision impairment in rare cases[13] and a number of studies have linked sildenafil use with nonarteritic anterior ischemic optic neuropathy.[14][15][16][17][18][19]

Rare but serious adverse effects found through postmarketing surveillance include priapism, severe hypotension, myocardial infarction (heart attack), ventricular arrhythmias, stroke, increased intraocular pressure, and sudden hearing loss.[11] As a result of these postmarketing reports, in October 2007, the FDA announced that the labeling for all PDE5 inhibitors, including sildenafil, required a more prominent warning of the potential risk of sudden hearing loss.[20]

Concomitant use of sildenafil and an alpha blocker may lead to low blood pressure, but this effect does not occur if they are taken at least four hours apart.[22]

Sildenafil's popularity with young adults has increased over the years.[24] Sildenafil's trade name "Viagra" is widely recognized in popular culture, and the drug's association with treating erectile dysfunction has led to its recreational use.[25] The reasons behind such use include the belief that the drug increases libido, improves sexual performance,[25] or permanently increases penis size[citation needed]. Studies on the effects of viagra when used recreationally are limited, but suggest that it has little effect when used by those not suffering from erectile dysfunction. In one study, a 25 mg dose was shown to cause no significant change in erectile quality, but did reduce the post-ejaculatory refractory time.[26] This study also noted a significant placebo effect in the control group.[26]

Unprescribed recreational use of sildenafil and other PDE-5 Inhibitors is noted as particularly high among users of illegal drugs.[27][28] Sildenafil is sometimes used to counteract the effects of other substances, often illicit.[25] Some users mix it with methylenedioxymethamphetamine (MDMA, ecstasy), other stimulants, or opiates in an attempt to compensate for the common side effect of erectile dysfunction, a combination known as "sextasy", "rockin' and rollin'," or "trail mix."[25] Mixing with amyl nitrite is particularly dangerous and potentially fatal.[25]

The 2007 Ig Nobel Prize in Aviation went to Patricia V. Agostino, Santiago A. Plano, and Diego A. Golombek of Universidad Nacional de Quilmes, Argentina for their discovery that Viagra aids jet lag recovery in hamsters.[29] Their research was published in the Proceedings of the National Academy of Sciences.[30]

Professional athletes have been documented using sildenafil, believing the opening of their blood vessels will enrich their muscles. In turn, they believe that it will enhance their performance.[31]

Acetildenafil is a structural analog of sildenafil, one of the PDE5 inhibitors found in a number of "herbal" aphrodisiac products sold over-the-counter. This class of analogs has not undergone any of the rigorous testing that drugs like sildenafil have passed, and, thus, has an unknown side-effect profile.[32] Some attempts have been made to ban these drugs, but progress has been slow so far, as, even in those jurisdictions that have laws targeting designer drugs, the laws are drafted to ban analogues of illegal drugs of abuse, rather than analogues of prescription medicines. However, at least one court case has resulted in a product being taken off the market.[33]

The United States FDA has banned numerous products claiming to be Eurycoma longifolia that, in fact, contain only analogs of sildenafil.[34][35][36] Peddlers of such fake herbals typically respond by just changing the names of their products.

Sildenafil and/or N-desmethylsildenafil, its major active metabolite, may be quantitated in plasma, serum or whole blood in order to assess pharmacokinetic status in those receiving the drug therapeutically, to confirm the diagnosis in potential poisoning victims or to assist in the forensic investigation in a case of fatal overdosage.[37]

The mechanism of action of sildenafil involves the protection of cyclic guanosine monophosphate (cGMP) from degradation by cGMP-specific phosphodiesterase type 5 (PDE5) in the corpus cavernosum. Nitric oxide (NO) in the corpus cavernosum of the penis binds to guanylate cyclase receptors, which results in increased levels of cGMP, leading to smooth muscle relaxation (vasodilation) of the intimal cushions of the helicine arteries. This smooth muscle relaxation leads to vasodilation and increased inflow of blood into the spongy tissue of the penis, causing an erection.[38] Robert F. Furchgott, Ferid Murad and Louis Ignarro won the Nobel Prize in Physiology or Medicine in 1998 for their independent study of the metabolic pathway of nitric oxide in smooth muscle vasodilation.

Sildenafil is a potent and selective inhibitor of cGMP-specific phosphodiesterase type 5 (PDE5), which is responsible for degradation of cGMP in the corpus cavernosum. The molecular structure of sildenafil is similar to that of cGMP and acts as a competitive binding agent of PDE5 in the corpus cavernosum, resulting in more cGMP and better erections.[38] Without sexual stimulation, and therefore lack of activation of the NO/cGMP system, sildenafil should not cause an erection. Other drugs that operate by the same mechanism include tadalafil (Cialis) and vardenafil (Levitra).

Sildenafil is metabolised by liver enzymes and excreted by both the liver and kidneys. If taken with a high-fat meal, absorption is reduced; the time taken to reach the maximum plasma concentration increases by around one hour, and the maximum concentration itself is decreased by nearly one-third.[39]

The preparation steps for synthesis of sildenafil are as follows:[40]

Sildenafil (compound UK-92,480) was synthesized by a group of pharmaceutical chemists working at Pfizer's Sandwich, Kent, research facility in England. It was initially studied for use in hypertension (high blood pressure) and angina pectoris (a symptom of ischaemic heart disease). The first clinical trials were conducted in Morriston Hospital in Swansea.[41] Phase I clinical trials under the direction of Ian Osterloh suggested that the drug had little effect on angina, but that it could induce marked penile erections.[1][42] Pfizer therefore decided to market it for erectile dysfunction, rather than for angina. The drug was patented in 1996, approved for use in erectile dysfunction by the US Food and Drug Administration on March 27, 1998, becoming the first oral treatment approved to treat erectile dysfunction in the United States, and offered for sale in the United States later that year.[43] It soon became a great success: annual sales of Viagra peaked in 2008 at US$1,934 million.[44]

The British Press portrayed Peter Dunn and Albert Wood as the inventors of the drug, a claim that Pfizer disputes.[45] Their names are on the manufacturing patent application, but the original patent on the synthesis of the the drug was filed by Nicholas Terrett and Peter Ellis.

Even though sildenafil is available only by prescription from a doctor, it was advertised directly to consumers on U.S. TV (famously being endorsed by former United States Senator Bob Dole and soccer star Pelé). Numerous sites on the Internet offer Viagra for sale after an "online consultation", often a simple web questionnaire.[46] The "Viagra" name has become so well known that many fake aphrodisiacs now call themselves "herbal viagra" or are presented as blue tablets imitating the shape and colour of Pfizer's product. Viagra is also informally known as "Vitamin V", "the Blue Pill", "Blue Diamond" as well as various other nicknames.[47]

In 2000, Viagra sales accounted for 92 percent of the global market for prescribed erectile dysfunction pills.[48] By 2007, Viagra's global share had plunged to about 50 percent[49] due to several factors, including the entry of Cialis and Levitra, along with several counterfeits and clones, and reports of vision loss in people taking PDE5 inhibitors.[50][51]

In February 2007, it was announced that Boots, the UK pharmacy chain, would try over-the-counter sales of Viagra in stores in Manchester, England. Men between the ages 30 and 65 would be eligible to buy four tablets after a consultation with a pharmacist.[52]

A UK patent held by Pfizer on the use of PDE5 inhibitors (see below) as treatment of impotence was invalidated in 2000 because of obviousness; this decision was upheld on appeal in 2002.[53][54] But there are two other patents covering the methods for manufacturing Viagra, and Pfizer has maintained its monopoly on the drug in the UK.[55]

Pfizer's patent on sildenafil citrate expired in Brazil in 2010[56]. It was originally believed that Pfizer's patents would expire in the United States in March 2012.[55][57], but an August 2011 federal district court case raises the prospect that at least one of Pfizer's patents will be valid until 2019.[58]