Scouse
This article is about the accent. For the food, see Scouse (food). For the type of dance music, see Scouse house. 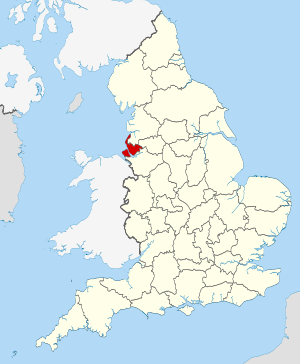 Location of Merseyside within England.

/ˈskaʊs/) is an accent and dialect of English found primarily in the Metropolitan county of Merseyside, and closely associated with the city of Liverpool and the adjoining urban areas such as the boroughs of south Sefton, Knowsley and the Wirral. The accent is known to be as far reaching as Clwyd, Runcorn and Skelmersdale in Wales, Cheshire and Lancashire respectively.[1][2][3][4][5][6][7][8]

The Scouse accent is highly distinctive, and has little in common with those used in the neighbouring regions of Cheshire and Lancashire.[4] The accent itself is not specific to all of Merseyside, with the accents of residents of St Helens and Southport, for example, more commonly associated with the historic Lancastrian accent.[1][2][3][4][5][7]

The accent was primarily confined to Liverpool until the 1950s when slum clearance in the city resulted in migration of the populace into new developments into surrounding areas of what was formally named Merseyside in 1974.[6] The continued development of the city and its urban areas has brought the accent into contact with areas not historically associated with Liverpool such as Prescot, Whiston, Rainhill, Widnes and Runcorn.[6]

Variations within the accent and dialect are noted, along with popular colloquialisms, that show a growing deviation from the historical Lancashire dialect[6] and a growth in the influence of the accent in the wider area.[1][2][3][4][5][7]

Inhabitants of Liverpool are called Liverpudlians but are more often described by the colloquialism Scousers.[9] People from surrounding areas who do not speak scouse are commonly referred to as "woolybacks" or "wools" (or derivatives thereof).

The word "scouse" is a shortened form of "lobscouse", derived from the Norwegian lapskaus (and/or the Low German Labskaus), a word for a meat stew commonly eaten by sailors. In the 19th century, people who supposedly commonly ate "scouse" became known as "scousers".

Originally a small fishing village, Liverpool developed as a port, particularly with Ireland, and after the 1700s as an international trading and industrial centre. By this point a city, it became a melting pot of several languages and dialects, but primarily Lancastrian English, Irish, Welsh, Dutch, Scandinavian, German and Scottish. As a result the Liverpool accent often has more in common with accents from other European and British port cities such as Glasgow, Dublin and Amsterdam than it does with local towns such as St Helens.[citation needed]

The influence of these different speech patterns became apparent in Liverpool and Birkenhead, distinguishing the accent of its people from those of the surrounding Lancashire and Cheshire areas. It is only recently that Scouse has been treated as a cohesive accent/dialect; for many years, Liverpool was simply seen as a melting pot of different accents without one of its own. For example, the early dialect researcher A. J. Ellis said that Liverpool and Birkenhead had "no dialect proper".[6][clarification needed] The Survey of English Dialects did investigate Halewood, which is just outside the city council boundaries. However, no audio recording was ever taken from the site, and all the notes were done in phonetic transcriptions.[clarification needed]

Scouse is noted for a fast, highly accented manner of speech, with a range of rising and falling tones not typical of most of northern England.

Irish influences include the pronunciation of the name of the letter "H" as /heɪtʃ/ and the 2nd Person plural (you) as 'youse/yous/use' /juːz/.

There are variations on the Scouse accent, with the south side of the city adopting a softer, lyrical tone, and the north a rougher, more gritty accent. Those differences, though not universal, can be seen in the pronunciation of the vowels.

Words such as 'book' and 'cook', for example, can be pronounced as 'boo-k' or 'bewk' and 'koo-k'. This is true to other towns from the midlands, northern England and Scotland. Oddly enough words such as 'took' and 'look', unlike some other accents in northern towns, revert to the type and are pronounced 'tuck' and 'luck'. Not all Liverpudlians are brought up to speak with this variation but this does not make it any less Scouse.

The use of a long /uː/ in such words was once used across the whole of Britain, but is now confined to the more traditional accents of Northern England and Scotland.[10]

The Scouse accent of the early 21st century is markedly different in certain respects from that of earlier decades.[citation needed]. The Liverpool accent of the 1950s and before was more a Lancashire-Irish hybrid. But since then, as with most accents and dialects, Scouse has been subject to phonemic evolution and change. Over the last few decades the accent is no longer a melange but has started to develop further. One could compare the way George Harrison and John Lennon spoke in the old Beatles films such as A Hard Day's Night with modern Scouse speakers such as Steven Gerrard and Jamie Carragher. Harrison pronounced the word 'fair' more like the standard English 'fur' - as Cilla Black does still. This is a pure Lancashire trait but modern Scousers do it the other way round pronouncing 'fur' like 'fair'. Huge changes have taken place in Scouse vowels, which show astonishing length and exaggeration at times in words like 'read' but conversely shorter than standard in a word like 'sleep'. A final 'er' is a sound whilst pronounced 'schwa' in surrounding Lancashire and Cheshire is emphasised strongly as the 'e' in 'pet' /pɛt/. In a strong Scouse accent, the phoneme /k/ in all positions of a word except the beginning can be realised as /x/ or sometimes /kx/.

The use of the glottal stop as an allophone of /t/ can occur in various positions, including after a stressed syllable. This is called T-glottalisation and is particularly common amongst the younger speakers of the Scouse accent. /t/ may also be flapped intervocalically. /t/ and /d/ are often pronounced similarly to the fricatives /s/ and /z/.

The loss of dental fricatives, /ð/ and /θ/, was commonly attributed as being present due to Irish English influence. They were realised as /d/ and /t/ respectively. However, in the younger generation, this feature is being outnumbered by those who realise them as a labiodental fricatives.

Other Scouse features include:

Scouse is highly distinguishable from other English dialects and because of this international recognition on 16 September 1996 Keith Szlamp made a request[11] to IANA to make it a recognised Internet dialect. After citing a number of references,[12][13][14][15][16] the application was accepted on 25 May 2000 and now allows Internet documents that use the dialect to be categorised as 'Scouse' by using the language tag "en-Scouse".

Other northern English dialects include: