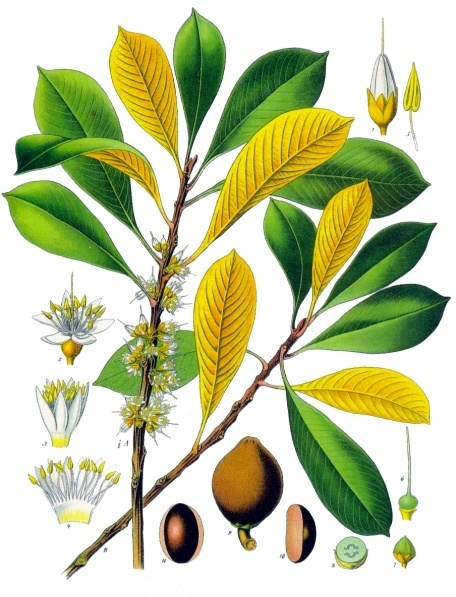 Gutta-percha ("Palaquium") is a genus of tropical s native to and northern , from south to Malaya and east to the . It is also an inelastic natural produced from the of these trees, particularly from the species "Palaquium gutta". Chemically, gutta-percha is a polyterpene, a of (trans-1,4-polyisoprene).

The word 'gutta-percha' comes from the plant's name in Malay, "getah perca", which translates as "percha rubber".

The trees are 5&ndash;30 metres tall and up to 1 metre in trunk diameter. The leaves are , alternate or spirally arranged, simple, entire, 8&ndash;25 cm long, and glossy green above, often yellow or glaucous below. The s are produced in small clusters along the stems, each flower with a white corolla with 4&ndash;7 (mostly 6) acute lobes. The is an ovoid 3&ndash;7 cm , containing 1&ndash;4 s; in many species the fruit is edible.

The latex is bioinert, resilient, and is a good electrical insulator due to a high . The of many species is also valuable.

Western inventors discovered the properties of gutta-percha latex in 1842, although the local population in its Malayan habitat had used it for a variety of applications for centuries. Allowing this fluid to evaporate and coagulate in the sun produced a latex which could be made flexible again with hot water, but which did not become brittle, unlike unvulcanized already in use.

By 1845, wires insulated with gutta-percha were being manufactured in . Gutta-percha served as the insulating material for some of the earliest undersea cables, including the first . Gutta-percha was particularly suitable for this purpose, as it was not attacked by marine plants or animals, a problem which had disabled previous undersea cables.

In the mid-nineteenth century, gutta-percha was also used to make , notably by the (established in 1847). Several of these highly ornate, revival-style pieces were shown at the 1851 . Molded furniture forms, emulating carved wood, were attacked by proponents of the design reform movement who advocated truth to materials. It was also used to make "mourning" jewelry because it was dark in color and could be easily carved into beads or other shapes.

The material was quickly adopted for numerous other applications. The "guttie" (which had a solid gutta-percha core) revolutionized the game. Gutta-percha remained an industrial staple well into the 20th century, when it was gradually replaced with superior (generally synthetic) materials, though a similar and cheaper natural material called is often used in gutta-percha's place. The two materials are almost identical, and balatá is often called gutta-balatá.

The same bio-inertness property that made it suitable for marine cables also means it does not readily react within the human body, and consequently it is used for a variety of surgical devices and for dental applications including padding inside fillings or inside the root-canal during therapy. It was also used as pistol grips for the same reason.

Gutta percha is the predominant material used to "obturate", or fill the empty space of, a after it has undergone . Its physical and chemical properties, including but not limited to its and , , and afford it an important role in the field of for a long time to come.

* The cane that used to beat on the floor of the United States Senate was made out of Gutta-percha wood.
* Gutta-percha was featured in the pilot movie Cocoon for the long-running television series . The criminal Wo Fat used it to seal the eyes, nose and ears of his victims.
*In the movie "Gorky Park," a identifies a murder victim as an American because he had a root canal filled with gutta percha, which was not used in Europe for that purpose.
*Up until the 1950s, Gutta-percha was applied to ropes used in British executions in order to avoid a metal component catching and marking the skin. It was later replaced with Vulcanised Rubber due to Gutta-percha's tendency to splinter when cold.