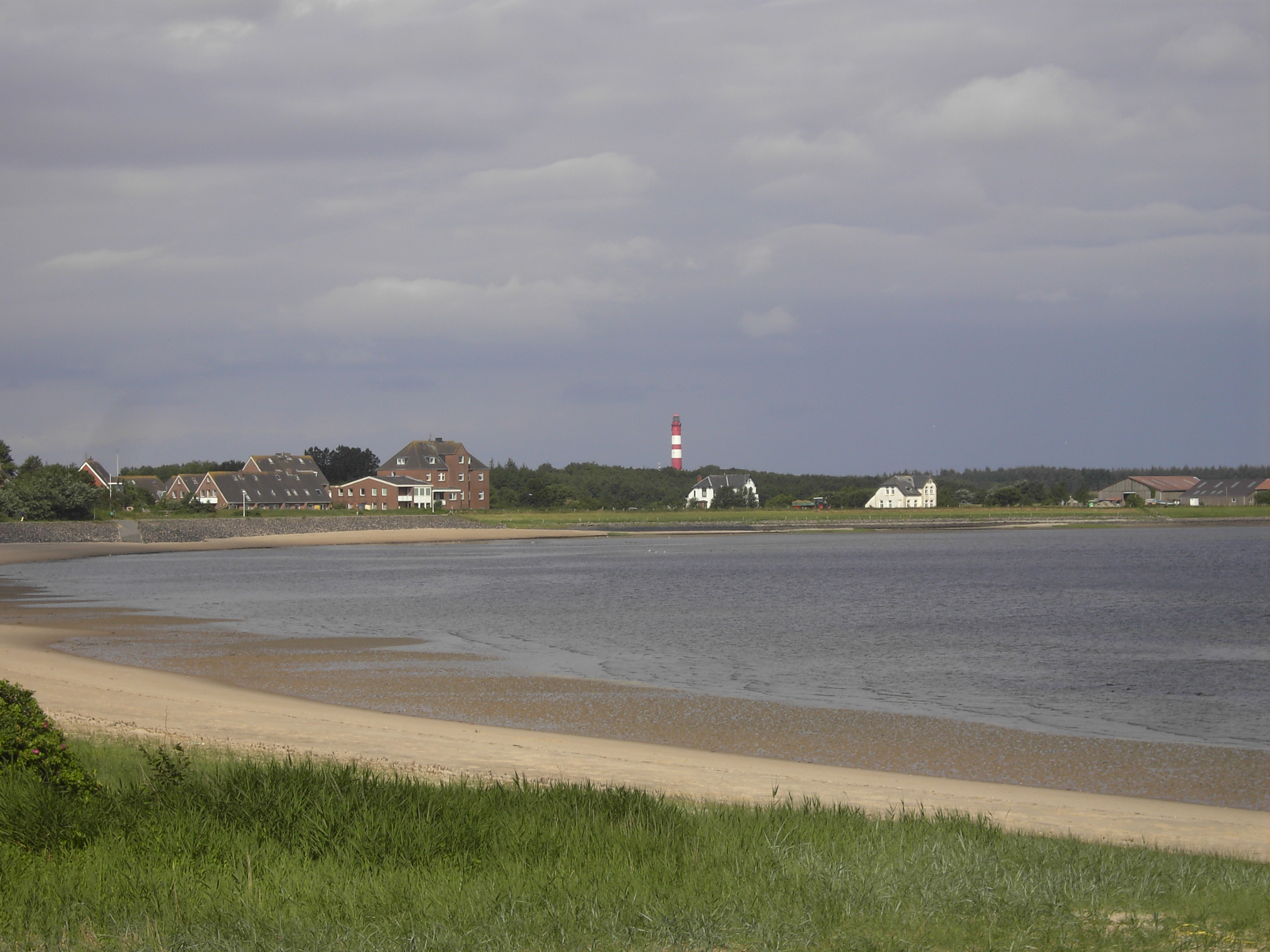 Amrum ("Öömrang" North Frisian: "Oomram") is one of the on the German coast, south of and west of . It is part of the district in the federal state of . With the island being a refuge for many endangered species of plants and animals, its soil being largely unfavourable for agriculture and as a popular seaside resort in general, Amrum's population almost exclusively lives on the tourism industry.

Amrum's area measures 20.46 km², making it the tenth-largest island of Germany. It is one of three isles with a core in Nordfriesland. To the east, it borders to the Wadden Sea of the North Sea. The east side is also where the island's ancient hamlets are situated: , Nebel, Süddorf and Steenodde. On the geestland core one can find extended areas of heath and woodland which form a strip that runs along a north-south line on the axis. West of this woodland strip, the entire island is covered with s. The maximal width of this area amounts to more than a kilometre, its length measures about 12 km. Amrum's tallest dune near Norddorf, called "a Siatler" (the settling dune) reaches 32 m of height. Northward, the dune area extends into a small peninsula called "Odde". In the south of Amrum, the newest settlement, , is located. West of the dunes, the entire shore of Amrum is made up of the "Kniepsand" beach; it counts among northern 's largest sand beaches. North of Norddorf there is some , another small marsh area can be found between Süddorf and Steenodde. Both of them are protected from the sea by dikes. During low it is possible to reach the neighbouring island of Föhr by .

The northernmost settlement is the of Norddorf with a pond and a . Amrum's largest village, Nebel, is located near the eastern coastline. Notable sights there include the church of St. Clement, the "Öömrang Hüs" - a museum of local history, a and the Cemetery of the Homeless. Süddorf, today a district of Nebel, is the island's oldest hamlet. The is located there. Steenodde, also a neighbourhood of Nebel, had long been Amrum's only port until Wittdün, founded 1890, had taken over as the island's major ferry terminal. Of the three municipalities, Wittdün is most clearly influenced by tourism.

The oldest traces of settlements in the area date back to the , among them a number of s. Also many tomb sites from the Bronze and s have been preserved. In the dunes west of the decoy pond the remainders of an Iron Age hamlet have been found. It is unknown whether the , who together with the and threatened around , stemmed from this island which back then was still connected to the mainland by a land bridge.

In the early the island was colonised by the . Next to salt making, agriculture, fishery and whaling, merchant shipping was one of the main sources of income for a long time. , a sailor from Süddorf who had been enslaved by ns in 1724, advanced to the rank of a ere he was allowed to return to his native island in 1736. During the late 19th century tourism became a rapidly emerging business on Amrum and effectively changed the island's economical structures.

During the Middle Ages Amrum as well as all of North Frisia proper belonged to the so-called "Uthlande", the Outer Lands, which only successively became parts of the Danish realm or the Duchy of . After the conflicts between the Danish kings and the counts of about the rule over Schleswig, Amrum and western Föhr became an of Denmark and contrary to neighbouring areas, it was not any longer a part of the Duchy of Schleswig. This state endured until 1864, when Denmark lost Schleswig to after the . For a brief period after that war Amrum was ruled together by Prussia and Austria, yet in 1867 the island came under Prussian rule and was made a part of the province of Schleswig-Holstein. At first, Amrum formed a municipality within the district of . In 1920, the resulted in a clear majority vote for Amrum staying with Germany, while Tondern fell back to Denmark. Until 1972, Amrum belonged to the "Südtondern" district which then merged into the newly created district of Nordfriesland.

Especially during the 19th century more than a quarter of Amrum's population emigrated - mainly to the . Today more people with ancestors from Amrum live in the United States than there are on Amrum proper. The connections between Amrum and the US are still being cultivated today.

On 29 October 1998 the "Pallas" ran aground off Amrum, causing a severe in the region. [cite web|url=http://www.waddensea-secretariat.org/news/publications/Wsnl/Wsnl99-1/articles/09-reineking.pdf|author=Reineking, Bettina|title=The PALLAS Accident|publisher=Common Wadden Sea Secretariat|format=PDF]

The main language on Amrum is German. The in the dialect is spoken by roughly a third of the population. Those 800 Amrumers are all multilingual. Due to the isolated location of the islands the North Frisian dialects developed so differently, that "Öömrang" can be understood by people from Föhr, yet is hardly recognisable for those from Sylt or mainland Nordfriesland. Many Amrumers moreover speak , since it had been the language of the coastal sailors. Only a few people speak the .

Amrum's for girls and women is coloured black and white and is amply decorated with silver ornaments. It is mostly worn on services or at touristical events.

There are two peculiar traditions on Amrum. On February 21 the "Biakendai" is celebrated, where a great bonfire is lit to dispel Winter. On the occasion people blacken each other's faces with soot. The festival originates from the old liturgical holiday of , which was originally celebrated on February 22. The custom is also popular in other North Frisian municipalities. On the "Hulken" takes place, where groups of mostly young people dress up in costumes and walk from house to house to let others guess their true identity (similar to ). According to their age, they are either treated with sweets or alcoholic drinks.

Amrum's main branch of economy is tourism. In 2007 the island could provide 12,000 beds. In 2004 approximately 125,000 tourists and 1.1 million lodgings were registered, [cite web|url=http://www.wfg-nf.de/cms/upload/PDF/Downloads/Tourismusbericht_NF_2004.pdf|title=Tourismusbericht Nordfriesland 2004|language=German|publisher=Wirtschaftsförderungsgesellschaft Nordfriesland ] as well as 80,000 day trip visitors.

Agriculture is also being practised on Amrum and the port hosts a single fisherman.

The isle is connected to and to the mainland harbour of on the one hand and to the and the mainland terminal of on the other hand by two ferry routes. During the summer season, a fast passenger boat offers services between the ports of on Sylt, the Halligen and and the harbour of on . Amrum's terminal is located at Wittdün, the ferries are operated by "Wyker Dampfschiffs-Reederei GmbH (W.D.R.)". Most tourists will reach Amrum via Dagebüll. From there, a ferry will need 90 minutes to reach the island on a straight route, the more common routes with a stop at need 120 minutes of time.

On the island, the bicycle is the main means of transport next to cars; compared to other areas of Germany, Amrum provides an excellent network of bicycle routes. Numerous rental services may provide tourists with bicycles. A bus service connects Norddorf, Nebel and Wittdün on an hourly schedule (every 30 minutes even during the summer season). Like the ferries, the bus service is operated by W.D.R.. A rather uncommon sort of traffic is the between Amrum and Föhr.

From 1893 to 1939, a railway service was operated on Amrum. There is no on the island, any plans to establish one have so far vehemently been opposed.

Plants and wild animals on Amrum are marked by the proximity to the sea, but some also distinguish themselves by extreme rarity and a high ecological value worth of protection. This fact was acknowledged by the establishment of two s and Amrum's situation close to the Schleswig-Holstein Wadden Sea National Park.

Amrum's vegetation is determined by the sea and by the different types of landscapes on the island, most of which are low in s. In parts of the dune belt and on the "Kniepsand" or sea wormwood grow, as well as numerous other sand-loving plants like sheep's bit which will bloom in sheltered areas between the dunes. Also some stunted pines, bent by the sea wind, and "", the creeping willow can be found there. Until the 1970s, the rare could still be seen in the dunes.

East of there are heaths and conifer or mixed forests. In some , peat bogs can be found which occasionally host the carnivorous plant common sundew. The once abundant marsh gentian vanished during the 1990s.

The Amrum forest was planted in 1948 on an area of heath. Until then only a few densely forested regions could be found around the decoy ponds. With 180 s, Amrum has the largest ratio of forestal land of all German North Sea islands. Mainly pines, firs and birches can be found here. Meanwhile the forest has largely lost its artificial nature. So one will encounter numerous plants on all levels and many species of fungi. On the geestland east of the forest, mostly extensive farming is carried out. Its grassland grows manifold plants like , , carthusian pink or several species of .

In the small marshlands, some sedges and the may be noticed. Here is the most nutritious soil on Amrum. Even the soil of Amrum's gardens is so low in nutrients that only few sorts of plants, eg. hollyhock, will grow there without fertilising.

On the es in the eastern part of Amrum, species similar to those in the dunes can be found. Also the pioneering plant Salicornia Europaea and alkali grasses are common.

Like the vegetation, Amrum's wild beasts are determined by the island's location within the North Sea. Thus there are only a few species of wild s on Amrum, like hare, mice, hedgehogs and bats. In the 12th century coneys were introduced as game. Still today they populate the island. A few years ago a pregnant vixen was set free on Amrum. She and her offspring caused severe damage to the island's fauna, but meanwhile they have been hunted down. In the sea and on the s off Amrum, thus within the National Park, s, s and s have their habitat. Occasionally in December and January young grey seals are washed ashore on Amrum's beaches due to and are thereafter nursed by the adults.

The realm of birds is particularly plentiful. Amrum counts among the most important hatching areas for s in Germany. It is the main hatching region for the , but also oystercatchers, shelducks, s, seagulls like s, and the as well as many other species use to hatch there on the beach, in between the dunes or at the mud flats. Additionally vast swarms of s will rest on Amrum during the season, e.g. , or , all of whom are able to find sufficient food along the coasts of Amrum. Moreover, a number of s can be found and s which were equally introduced as game are common.

Lizards and amphibians, such as , and are other examples of land .

In the sea surrounding Amrum numerous fish species typical of the North Sea can be found, like plaice and . The number of other marine species is equally great, the hermit crab, the common whelk and the are all among them. Of them, mainly the sand shrimps are commercially used by "harvesting" them from the seabed with cutters. The shrimps are then wrongly marketed as "crabs" ("Krabben").

The local newspaper is called "Der Insel-Bote" (The Island Courier), it is published by Schleswig-Holsteinischer Zeitungsverlag and is the common paper for Föhr and Amrum.