Monty Don was born in Berlin, son of Denis Don, a career soldier posted in Germany and Janet (née Wyatt). Both parents died in the 1980s.[2] Don has a twin sister, an elder brother David, and two other siblings. His twin suffered a broken neck and blindness in a car crash, aged 19.[1]

Both his paternal grandmother and grandfather were Scottish; he is descended from the Keiller family of Dundee, inventors of chip marmalade in 1797.

Don was educated at three independent schools: Quidhampton School in Basingstoke, Hampshire, Bigshotte School in Wokingham, Berkshire, and at Malvern College in Malvern, Worcestershire, a college he hated. [3] He then attended a state comprehensive school, The Vyne School, in Hampshire. He failed his A levels and while studying for re-takes at night school, worked on a building site and a pig farm by day. During his childhood he had become an avid gardener and farmer.[3] He determined to go to Cambridge out of “sheer bloody-mindedness”, attending Magdalene College,[1][4][5] where he read English and met his future wife Sarah. [6] 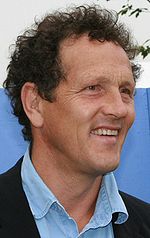 In the 1980s, Don and his wife formed a successful company that made and sold costume jewellery under the name Monty Don Jewellery. The collapse of the company in the early 1990s prompted him to embark on a career in writing and broadcasting. He has written about the rise and collapse of their business in The Jewel Garden, an autobiographical book written with his wife. “We were lambs to the slaughter and we lost everything, [...] we lost our house, our business. We sold every stick of furniture we had at Leominster market,” he wrote. He was unemployed from 1991 to 1993. [1] [3]

Don's first TV work came as the presenter of a gardening segment on breakfast show This Morning. He featured as a guest presenter for the BBC's Holiday programme. He went on to present several Channel 4 land and gardening series: Don Roaming, Fork to Fork, Real Gardens and Lost Gardens, and wrote a regular weekly gardening column for The Observer between February 1994 and May 2006. Don had never received formal training as a gardener. He commented, "I was – am – an amateur gardener and a professional writer. My only authority came from a lifetime of gardening and a passion amounting to an obsession for my own garden."[7] He is a keen proponent of organic gardening and the practice of organic techniques, to some extent, features in all of his published work. The organic approach is most prominent in his 2003 book The Complete Gardener.

Don was the main presenter on BBC Two's Gardeners' World from 2003 to 2008 succeeding Alan Titchmarsh. He was the first self-taught horticulturist presenter in the show's 36-year history, stepping down only after suffering a minor stroke. [3] [8]After viewing figures for Gardener's World fell[9] below two million for the first time in 2009,[10] in January 2010, changes were announced to the programme in an attempt to entice viewers back.[11] In December 2010, it was announced that Don would be returning to the programme as lead presenter for the 2011 series, replacing Toby Buckland.[12] [13] Reaction to the announcement was divided on the programme's blog.[14] Since March 2011 he has been presenting the programme from his own garden in Herefordshire

Don featured in the BBC programme and book, Growing out of Trouble, in which several heroin addicts manage a 6-acre (24,000 m2) Herefordshire smallholding in an attempt at rehabilitation. [3] He also presented Around the World in 80 Gardens (BBC Two 27 January - 30 March 2008) and in December 2008, narrated a programme about the cork oak forests of Portugal, for the BBC's natural history series Natural World.[15] He presented My Dream Farm, a series which helped people learn to become successful smallholders (Channel 4, January 2010) [16] [17] and Mastercrafts, a six-part series for BBC Two, which celebrated six traditional British crafts.[18] He has twice been a panelist on the BBC's Question Time (February 2009 and March 2010) and his family history was the subject of the fourth programme in the seventh series of the BBC genealogy programme Who Do You Think You Are? (August 2010). In April 2011 Don presented Italian Gardens, a four part BBC2 series which was accompanied by the publication of a book.[19][20]

In late 2008 Don became President of the Soil Association.

He and Sarah married in 1983, and have three children, Adam, Freya and Tom. The couple lived in Islington, North London while Don pursued postgraduate study at the London School of Economics, worked as waiter at Joe Allen restaurant in Covent Garden and later as a dustman, completing two unpublished novels. Sarah trained as a jeweller.

Don has written of his struggle with depression since the age of 25[21] and Seasonal Affective Disorder.[3] He describes in his memoir, "great spans of muddy time" in which there is nothing but depression. He noted "'Earth heals me better than any medicine".[3] He has had cognitive behavioural therapy and took Prozac before favouring a lightbox, now a recognised aid for Seasonal Affective Disorder sufferers. He had peritonitis in 2007 and a minor stroke in 2008. [3] [8]

He currently lives in Ivington, Herefordshire, England, and has lived in Herefordshire for over 20 years.[22]