Vagina
This article is about the body part. For other uses, see Vagina (disambiguation).

The vagina (from Latin vāgīna, literally "sheath" or "scabbard") is a fibromuscular tubular tract leading from the uterus to the exterior of the body in female placental mammals and marsupials, or to the cloaca in female birds, monotremes, and some reptiles. Female insects and other invertebrates also have a vagina, which is the terminal part of the oviduct. The Latinate plural "vaginae" is rarely used in English.

The human vagina is an elastic muscular canal that extends from the cervix to the vulva.[2]

Although there is wide anatomical variation, the length of the unaroused vagina of a woman of child-bearing age is approximately 6 to 7.5 cm (2.5 to 3 in) across the anterior wall (front), and 9 cm (3.5 in) long across the posterior wall (rear).[3] During sexual arousal the vagina expands in both length and width.[4] Its elasticity allows it to stretch during sexual intercourse and during birth to offspring.[5] The vagina connects the superficial vulva to the cervix of the deep uterus.

If the woman stands upright, the vaginal tube points in an upward-backward direction and forms an angle of slightly more than 45 degrees with the uterus. The vaginal opening is at the caudal end of the vulva, behind the opening of the urethra. The upper one-fourth of the vagina is separated from the rectum by the recto-uterine pouch. Above the vagina is the Mons pubis. The vagina, along with the inside of the vulva, is reddish pink in color, as are most healthy internal mucous membranes in mammals. A series of ridges produced by folding of the wall of the outer third of the vagina is called the vaginal rugae. They are transverse epithelial ridges and their function is to provide the vagina with increased surface area for extension and stretching.

Vaginal lubrication is provided by the Bartholin's glands near the vaginal opening and the cervix. The membrane of the vaginal wall also produces moisture, although it does not contain any glands. Before and during ovulation, the cervix's mucus glands secretes different variations of mucus, which provides an alkaline environment in the vaginal canal that is favorable to the survival of sperm.

The hymen is a membrane of tissue which is situated at the opening of the vagina. As in many female animals, the hymen covers the opening of the vagina from birth until it is ruptured during sexual or other activity. The tissue may be ruptured by vaginal penetration, delivery, a pelvic examination, injury, or sports. The absence of a hymen does not indicate prior sexual activity, as it is not always ruptured during sexual intercourse.[6] Similarly, its presence does not indicate a lack of prior sexual activity, as light activity may not rupture it, and it can be surgically restored.

The vagina has several biological functions.

The concentration of the nerve endings that lie close to the entrance of a woman's vagina can provide pleasurable sensation during sexual activity, when stimulated in a way that the particular woman enjoys. During sexual arousal, and particularly the stimulation of the clitoris, the walls of the vagina self-lubricate. This reduces friction that can be caused by various sexual activities. Research has found that portions of the clitoris extend into the vulva and vagina.[7]

With arousal, the vagina lengthens rapidly to an average of about 4 in.(10 cm), but can continue to lengthen in response to pressure.[8] As the woman becomes fully aroused, the vagina tents (last ²⁄₃) expands in length and width, while the cervix retracts.[9] The walls of the vagina are composed of soft elastic folds of mucous membrane which stretch or contract (with support from pelvic muscles) to the size of the inserted penis or other object, stimulating the penis and helping to cause the male to experience orgasm and ejaculation, thus enabling fertilization. 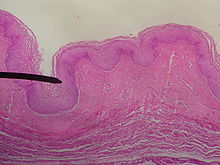 Structure of the wall of vagina

An erogenous zone commonly referred to as the G-Spot (also known as the Gräfenberg Spot) is located at the anterior wall of the vagina, about five centimeters in from the entrance. Some women experience intense pleasure if the G-Spot is stimulated appropriately during sexual activity. A G-Spot orgasm may be responsible for female ejaculation, leading some doctors and researchers to believe that G-Spot pleasure comes from the Skene's glands, a female homologue of the prostate, rather than any particular spot on the vaginal wall.[10][11][12] Some researchers dispute the existence of the G-Spot.[13]

During childbirth, the vagina provides the channel to deliver the infant from the uterus to its independent life outside the body of the mother. During birth, the elasticity of the vagina allows it to stretch to many times its normal diameter. The vagina is often typically referred to as the birth canal in the context of pregnancy and childbirth, though the term is, by definition, the area between the outside of the vagina and the fully dilated uterus.[14]

The vagina provides a path for menstrual blood and tissue to leave the body. In industrial societies, tampons, menstrual cups and sanitary napkins may be used to absorb or capture these fluids. 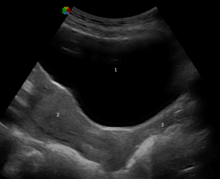 The vagina is self-cleansing and therefore usually needs no special treatment. Doctors generally discourage the practice of douching.[15] Since a healthy vagina is colonized by a mutually symbiotic flora of microorganisms that protect its host from disease-causing microbes, any attempt to upset this balance may cause many undesirable outcomes, including but not limited to abnormal discharge and yeast infection. The acidity of a healthy vagina of a woman of child-bearing age (a pH of around 4.5) is due to the degradation of glycogen to the lactic acid by enzymes secreted by the Döderlein's bacillus. This is a normal commensal of the vagina. The acidity retards the growth of many strains of dangerous microbes.[16]

The vagina is examined during gynecological exams, often using a speculum, which holds the vagina open for visual inspection of the cervix or taking of samples (see pap smear).

Vaginismus, not to be confused with Vaginitis, refers to an involuntary tightening of the vagina, due to a conditioned reflex of the muscles in the area. It can affect any form of vaginal penetration, including sexual intercourse, insertion of tampons and menstrual cups, and the penetration involved in gynecological examinations. Various psychological and physical treatments are possible to help alleviate it.

The presence of unusual lumps in the wall or base of the vagina is always abnormal. The most common of these is Bartholin's cyst.[17] The cyst, which can feel like a pea, is formed by a blockage in glands which normally supply the opening of the vagina. This condition is easily treated with minor surgery or silver nitrate. Other less common causes of small lumps or vesicles are herpes simplex. They are usually multiple and very painful with a clear fluid leaving a crust. They may be associated with generalized swelling and are very tender. Lumps associated with cancer of the vaginal wall are very rare and the average age of onset is seventy years.[18] The most common form is squamous cell carcinoma, then cancer of the glands or adenocarcinoma and finally, and even more rarely, melanoma.

A speculum allows physicians to examine the vagina and cervix.

The great majority of vaginal discharges are normal or physiological and include blood or menses (from the uterus), the most common, and clear fluid either as a result of sexual arousal or secretions from the cervix. Other non infective causes include dermatitis, discharge from foreign bodies such as retained tampons or foreign bodies inserted by curious female children into their own vaginas. Non-sexually transmitted discharges occur from bacterial vaginosis and thrush or candidiasis. The final group of discharges include the sexually transmitted diseases gonorrhea, chlamydia and trichomoniasis. The discharge from thrush is slightly pungent and white, that from trichomoniasis more foul and greenish, and that from foreign bodies resembling the discharge of gonorrhea, greyish or yellow and purulent (like pus).[19]

All sores involve a breakdown in the walls of the fine membrane of the vaginal wall. The most common of these are abrasions and small ulcers caused by trauma. While these can be inflicted during rape most are actually caused by excessive rubbing from clothing or improper insertion of a sanitary tampon. The typical ulcer or sore caused by syphilis is painless with raised edges. These are often undetected because they occur mostly inside the vagina. The sores of herpes which occur with vesicles are extremely tender and may cause such swelling that passing urine is difficult. In the developing world a group of parasitic diseases also cause vaginal ulceration such as Leishmaniasis but these are rarely encountered in the west. HIV/AIDS can be contracted through the vagina during intercourse but is not associated with any local vaginal or vulval disease.[20] All the above local vulvovaginal diseases are easily treated. Often only shame prevents patients from presenting for treatment.[21]

Intravaginal administration is a route of administration where the substance is applicated inside the vagina. Pharmacologically, it has the potential advantage to result in effects primarily in the vagina or nearby structures (such as the vaginal portion of cervix) with limited systemic adverse effects compared to other routes of administration.

The Wiktionary definition of vagina