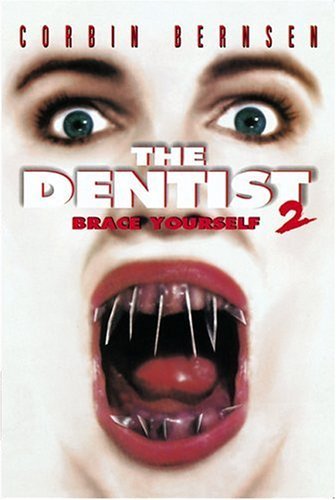 "The Dentist 2" (also known as "The Dentist 2: Brace Yourself") is a 1998 American directed by and starring as Dr. Alan Feinstone, as Jamie Devers, as Jeremy Wilkes and as Bev Trotter.

At the end of The Dentist, we saw the murderous Dr. Alan Feinstone being sentenced to life in a maximum security mental hospital. At the opening of this movie, we see him in the same hospital talking to the facility's psychiatrist. He is remembering the murders he committed in his own mind, while convincing the doctor that he doesn’t really remember the man who did those evil things.

The doctor is so wrapped up in his story that she doesn’t notice him pull out a small sharp object from a stitched up wound that he reopens in his leg. He uses it to hold up against her neck, to take her as a hostage out of the hospital.

Meanwhile, we discover that Brooke is alive despite her missing tongue and inability to utter a word. She hires an investigator to find out where Alan has disappeared to since his escape. She believes that he had been putting away money before he went crazy. Brooke has in her possession some postcards that Alan had left behind, she believes he is in one of those places and sends the investigator to find her husband.

Dr. Alan Feinstone is now back in the small town of Paradise, pretending that he had never left to move to the big city. We learn that he is now going by Dr. Lawrence (Larry) Crane instead. Mr. Wilkes, the bank officer introduces Larry to his niece Jamie, hoping that she can rent out her small cottage for Larry to live in.

Jamie becomes a target of Larry’s affections. She looks almost like Brooke and seems to be the perfect countrygirl. Unfortunately, Larry also has problems with a cap on one of his teeth and must go see the inept town dentist. Larry does not take a liking to Dr. Burns, especially when the cap falls back off after only about an hour.

Here we see the beginning of Larry’s rage once again. The dentist ends up accidentally falling down the stairs and there is no one to run the office. Mr. Wilkes convinces Larry that he should take over in that capacity.

* as Dr. Lawrence Caine/Dr. Alan Feinstone
* as Jamie Devers
* as Jeremy Wilkes
* as Bev Trotter
* as Doc Burns
* as Robbie Mauro
* as Bernice
* as Det. Jenkins
* as Mr. Toothache
* as Brooke Sullivan
* as Margaret
* as Shawna
* as Glenda
* as Dr. Cussler
* as Sidewalk cafe owner (as Gina-Raye Swensson)
*