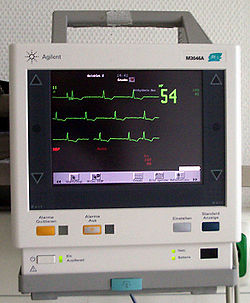 Medical monitor as used in anesthesia

A medical monitor or physiological monitor or display, is an electronic medical device used in medical monitoring that displays the monitored data, and may or may not have the ability to transmit the data on a monitoring network. Physiological data are displayed continuously on a CRT or LCD screen as data channels along the time axis, They may be accompanied by numerical readouts of computed parameters on the original data, such as maximum, minimum and average values, pulse and respiratory frequencies, and so on.

Old analog patient monitors were based on oscilloscopes, and had one channel only, usually reserved for electrocardiographic monitoring (ECG). So, medical monitors tended to be highly specialized. One monitor would track a patient's blood pressure, while another would measure pulse oximetry, another the ECG. Later analog models had a second or third channel displayed in the same screen, usually to monitor respiration movements and blood pressure. These machines were widely used and saved many lives, but they had several restrictions, including sensitivity to electrical interference, base level fluctuations, and absence of numeric readouts and alarms. In addition, although wireless monitoring telemetry was in principle possible (the technology was developed by NASA in the late 1950s for manned spaceflight) it was expensive and cumbersome.

With the development of digital signal processing (DSP) technology, however, medical monitors evolved enormously, and all current models are digital, which also has the advantages of miniaturization and portability. Today the trend is toward multiparameter monitors that can track many different vital signs at once. The parameters (or measurements) now consist of pulse oximetry (measurement of the saturated percentage of oxygen in the blood, referred to as SpO2, and measured by an infrared finger cuff), ECG (electrocardiograph of the QRS waves of the heart with or without an accompanying external heart pacemaker), blood pressure (either invasively through an inserted blood pressure transducer assembly, or non-invasively with an inflatable blood pressure cuff), and body temperature through an adhesive pad containing a thermoelectric transducer. In some situations, other parameters can be measured and displayed, such as cardiac output (via an invasive Swan-Ganz catheter), capnography (CO2 measurements, referred to as EtCO2 or end-tidal carbon dioxide concentration), respiration (through a thoracic transducer belt, an ECG channel or via EtCO2, when it is called AWRR or airway respiratory rate), etc.

Besides the tracings of physiological parameters along time (X axis), digital medical monitors have automated numeric readouts of the peak and/or average parameters displayed on the screen, and high/low alarm levels can be set, which alert the staff when some parameter exceeds of falls the level limits, using audible signals.

Several models of multiparameter monitors are networkable, i.e., they can send their output to a central ICU monitoring station, where a single staff member can observe and respond to several bedside monitors simultaneously. Ambulatory telemetry can also be achieved by portable, battery-operated models which are carried by the patient and which transmit their data via a wireless data connection.

Some digital patient monitors, especially those used EMS services,often incorporate a defibrillator into the patient monitor itself. These monitor/defibrillators usually have the normal capabilities of an ICU monitor, but have manual (and usually semi-automatic AED)defibrillation capability. This is particular good for EMS services, who need a compact, easy to use monitor and defibrillator, as well as for inter- or intrafacility patient transport. Most monitor defibrillators also have transcutaneous pacing capability via large AED like adhesive pads (which often can be used for monitoring, defibrillation and pacing)that are applied to the patient in an anterior-posterior configuration. The monitor defibrillator units often have specialized monitoring parameters such as waveform capnography, invasive BP, and in some monitors, Masimo Rainbow SET pulse oximetry. Examples of monitor defibrillators are the Lifepak 12, 15 and 20 made by Physio Control, the Philips Heartstart MRx, and the E Series and R Series by ZOLL Medical.

Monitors may be classified as: 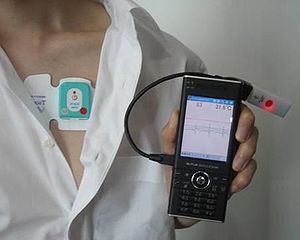 Portable heart monitors exist in several configurations, ranging from single-channel models for domestic use, which are capable of storing or transmitting the signals for appraisal by a physician, to 12-lead complete, portable ECG machines which can store for 24 hours or more (so-called Holter monitoring devices). There are also portable monitors for blood pressure (MAPA) and EEG.

Digital monitoring has created the possibility, which is being fully developed, of integrating the physiological data from the patient monitoring networks into the emerging hospital electronic health record and digital charting systems, using appropriate health care standards which have been developed for this purpose by organizations such as IEEE and HL7. This newer method of charting patient data reduces the likelihood of human documentation error and will eventually reduce overall paper consumption. In addition, automated ECG interpretation incorporates diagnostic codes automatically into the charts. Medical monitor's embedded software can take care of the data coding according to these standards and send messages to the medical records application, which decodes them and incorporates the data into the adequate fields.

Medical monitors have been safety engineered so that failures are either apparent or unimportant.[citation needed]. Some monitors (for example ECG and EEG) have an electrical contact with the patient, so they can be hazardous if electrical current passes through these electrodes in case of grounding failures. There are strict limits on how much current and voltage can be applied, even if the unit fails or becomes wet.[citation needed] They must typically withstand electrical defibrillation without damage.