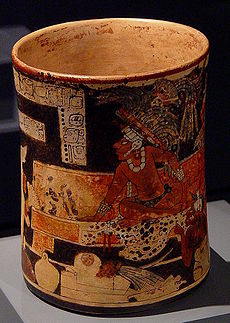 Painting on the Lord of the jaguar pelt throne vase, a scene of the Maya court, 700-800 AD

Maya ceramics are important in the study of the Pre-Columbian Maya culture of Mesoamerica. Through the years, the vessels took on different shapes, colors, sizes, and purposes. The intense artistic mosaics that grace the walls of the ancient masterpieces reveal stories of rulers, the underworld (Xibalba), Maya creation, and even the particular function of the vessel.

Used for a plethora of daily activities, such as the storage of food and beverages, ceramics were also a canvas of commemoration.

The utilitarian ware of the common people usually possessed only modest decoration. The funerary ware of the elite was often more elaborate.

Strategic Mesoamerican ballgames, rituals, and death were key subjects painted or inscribed on the vessels. 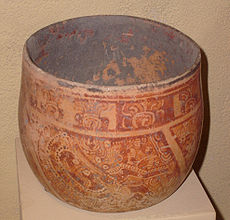 The Maya had specific techniques to create, inscribe, paint, and design pottery. To begin creating a ceramic vessel the Maya had to locate the proper resources for clay and temper. The present-day indigenous Maya, who currently live in Guatemala, Belize and southern Mexico still create wonderful ceramics. Prudence M. Rice provides a look at what the current Guatemalan Maya use today for clay. Highland Guatemala has a rich geological history comprised mainly from a volcanic past. The metamorphic and igneous rock, as well as the sand and ash from the pumice areas provide many types of tempering. In the area, there are a range of clays that create varied colors and strengths when fired. Today's Maya locate their clays in the exposed river systems of the highland valleys. It is hypothesized that the ancient people obtained their clay by the same method as today's Maya. The clays are located in exposed river systems of the highland valleys. Most likely, due to the climatic similarities over the last millennia it is likely that these same deposits or similar ones could have been used in early times.

Once the clay and temper were collected, pottery creation began. The maker would take the clay and mix it with the temper (the rock pieces, ash, or sand). Temper served as a strengthening device for the pottery. Once worked into a proper consistency, the shape of the piece was created.

A potter's wheel was not used in creating this pottery. Instead, they used coil and slab techniques. The coil method most likely involved the formation of clay into long coiled pieces that were wound into a vessel. The coils were then smoothed together to create walls. The slab method used square slabs of clay to create boxes or types of additions like feet or lids for vessels. Once the pot was formed into the shape, then it would have been set to dry until it was leather hard, then it was painted, inscribed, or slipped. The last step was the firing of the vessel. Kilns were used to fire the vessels, and they were normally found outside in the open air. Unlike many modern kilns, they were fired by wood, charcoal, or even grass.

Like the Ancient Greeks, the Maya created clay slips from a mixture of clays and minerals. The clay slips were then used to decorate the pottery. By the fourth century, a broad range of colors including yellow, purple, red, and orange were being made. However, some Mayan painters refrained from using many colors and used only black, red, and occasionally cream. This series of ceramics is termed the "Codex-style", it being similar to the style of the Pre-Columbian books.

From the 5th century onwards, post-firing stucco was adopted from Teotihuacan. By preparing a thin quicklime, the Maya added mineral pigments that would dissolve and create rich blues and greens that added to their artistic culture. Many times this post-fire stucco technique was mixed with painting and incising. Incising is carving deeply or lightly into partially dried clay to create fine detailed designs. This technique was mostly popular during the Early Classic Period.

The Maya were a diverse people whose culture has developed through the centuries. As they developed, so did their pottery. Archaeologists have found stages of commonality between types of ceramics, and these phases coincide with the Mayan timeline.

Middle Preclassic (900/800-250 BC) Late Preclassic (250 BC-250 AD)Early Mayan ceramics stemmed from a past that began even years before the Maya became a group. Originally, the early Maya used gourds cut into useful shapes to create vessels to carry liquids and foodstuffs. These portable and durable gourds made excellent containers. The first ceramics closely resembled gourds and many were decorated with rocker stamps and simple slips. During the Late Preclassic period, many of the ceramics took on appendages of tetrapod mammiform supports. These supports were four legs underneath the pot holding it up. Characteristic cream-on-red stripes colored these unique vessels.

The pottery of the Maya Early Classic dated from 250 to 550 AD. The Maya soon began using polychrome slip paint, meaning they used many different colors to decorate the pots. This method of decoration became almost homogeneous for Mayan potters, thus signaling the beginning of the Classic Period. The Classic Period of the Maya provided beautiful ceramics in many forms. The lidded basal flange bowl was a new style of potter to add to the already growing repertoire. This type vessel usually had a knob on top in the form of an animal or human head, while the painted body of the animal or human spreads across the pot. Many of these pots also had mammiform supports, or legs. These unique vessels are usually found in great condition signaling a ritual function. 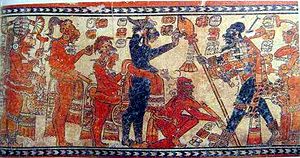 Version of a Maya ceramic timetable, adapted from a tourist booklet for Chichen Itza, 1984.