The Yellow Wagtail, Motacilla flava, is a small passerine in the wagtail family Motacillidae, which also includes the pipits and longclaws.

This species breeds in much of temperate Europe and Asia and has a foothold in North America in Alaska. It is resident in the milder parts of its range, such as western Europe, but northern and eastern populations migrate to Africa and south Asia. The Beringian population winters further down the Pacific coast.

Vagrant individuals occur around the winter quarters at migration time. For example, on Palau in Micronesia migrant flocks of this species – apparently of the Bering Sea Yellow Wagtail, and including many adult males – are regularly seen, while further north on the Marianas, only the occasional stray individual – usually females or immatures as it seems – is encountered.[1]

It is a slender 15–16 cm long bird, with the characteristic long, constantly wagging tail of its genus. It is the shortest tailed of the European wagtails. The breeding adult male is basically olive above and yellow below. In other plumages, the yellow may be diluted by white. The heads of breeding males come in a variety of colours and patterns depending on subspecies.

The call is a characteristic high-pitched jeet.[2]

This insectivorous bird inhabits open country near water, such as wet meadows. It nests in tussocks, laying 4-8 speckled eggs.

This species' systematics and phylogeny is extremely confusing. Literally dozens of subspecies have been described at one time or another, and some 15-20 are currently considered valid depending on which author reviews them. In addition, the Citrine Wagtail (M. citreola) forms a cryptic species complex with this bird;[3] both taxa as conventionally delimited are paraphyletic in respect to each other. The populations of the Beringian region are sometimes separated as Eastern Yellow Wagtail (M. tschutschensis).

Coloration refers to males except when noted. 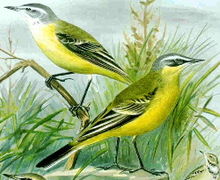 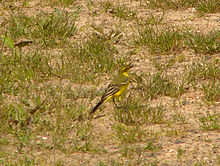 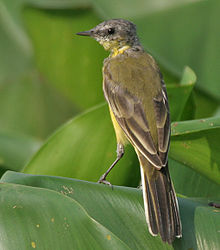 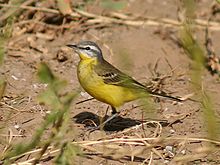 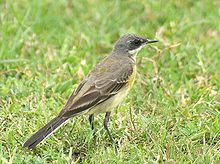 Like flavissima but daker above, ears much darker, almost black. Sexes similar.
Breeding: between ranges of plexa and tschutschensis S via Sakhalin to N Hokkaidō. Winter: Myanmar to Taiwan, S to Wallacea.

Males like thunbergi but brighter and more strongly marked overall. Female like in thunbergi but no supercilium.
Breeding: SE Transbaikalia E to coast, S to Manchuria. Winter: NW of South China Sea.

Nominate Blue-headed Wagtail and Yellow Wagtail form a narrow hybrid zone in northern France. Birds from this zone vary in appearance, but one type, which resembles nominate Blue-headed Wagtail (except that the blue tones to the head are paler and more mauve and the white of the head is more extensive, particularly on the throat, ear-coverts, and supercilium) is colloquially referred to as Channel Wagtail.