Louis Aimé Augustin Le Prince (born Metz 28 August 1841, vanished 16 September 1890) was an inventor who is considered by many film historians[1] as the true father of motion pictures,[2] who shot the first moving pictures on paper film using a single lens camera.[3][4]

A Frenchman who also worked in the United Kingdom and the United States, Le Prince conducted his ground-breaking work in 1888 in the city of Leeds, West Yorkshire, England, UK.

In October 1888, Le Prince filmed moving picture sequences Roundhay Garden Scene and a Leeds Bridge street scene using his single-lens camera and Eastman's paper film.[5] These were several years before the work of competing inventors such as Auguste and Louis Lumière and Thomas Edison.

He was never able to perform a planned public demonstration in the United States because he mysteriously vanished from a train on 16 September 1890.[3] His body and luggage were never found, but, over a century later, a police archive was found to contain a photograph of a drowned man who could have been him.[5]

The early history of motion pictures in the United States and Europe is marked by battles over patents of cameras. In 1888 Le Prince was granted an American dual-patent on a 16-lens device that combined a motion picture camera with a projector. A patent for a single-lens type (MkI) was refused in America because of an interfering patent, yet a few years later the same patent was not opposed when the American Thomas Edison applied for one.

On October 14, 1888, Le Prince used an updated version (MkII) of his single-lens camera to film Roundhay Garden Scene. He exhibited his first films in the Whitley factory in Hunslet, Leeds and in Oakwood Grange, the Whitley home in Roundhay, Leeds, but they were not distributed to the general public.

The following year, he took French-American dual citizenship in order to establish himself with his family in New York City and to follow up his research. However, he was never able to perform his planned public exhibition at Jumel Mansion, New York, in September 1890, due to his mysterious disappearance. Consequently, Le Prince's contribution to the birth of the cinema has often been overlooked.

Le Prince was born on Saint-Georges street in Metz, France, on 28 August 1841.[6][3][7] His father was a major of artillery in the French Army[8] and an officer of the Légion d'honneur. He grew up spending time in the studio of his father's friend, the photography pioneer Louis Jacques Mandé Daguerre,[8] from whom the young Le Prince received lessons relating to photography and chemistry[citation needed] and for whom he was the subject of a Daguerrotype,[citation needed] an early type of photograph. His education went on to include the study of painting in Paris and post-graduate chemistry at Leipzig University,[8] which provided him with the academic knowledge he was to utilise in the future.

He moved to Leeds, West Yorkshire, UK in 1866, after being invited to join John Whitley,[3] a friend from college, in Whitley Partners of Hunslet,[9] a firm of brass founders making valves and components. In 1869 he married Elizabeth Whitley, John's sister[3] and a talented artist. The couple started a school of applied art, the Leeds Technical School of Art, in 1871, and became well renowned for their work in fixing colour photography on to metal and pottery, leading to them being commissioned for portraits of Queen Victoria and the long-serving Prime Minister William Gladstone produced in this way, that were included alongside other mementos of the time in a time capsule - manufactured by Whitley Partners of Hunslet - which was placed in the foundations of Cleopatra's Needle on the embankment of the River Thames.[citation needed]

In 1881 Le Prince went to the United States[8] as an agent for Whitley Partners, staying in the country along with his family once his contract had ended.[citation needed] He became the manager for a small group of French artists who produced large panoramas, usually of famous battles, that were exhibited in New York City, Washington DC and Chicago.[8][9] During this time he continued the experiments he had begun, relating to the production of 'moving' photographs and to find the best material for film stock.

During his time in the USA, Le Prince built a camera that utilised sixteen lenses[9] and was his first invention to be patented. Although the camera was capable of 'capturing' motion, it wasn't a complete success because each lens photographed the subject from a slightly different viewpoint and thus the projected image jumped about. 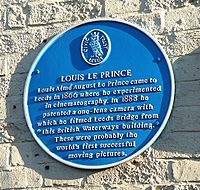 The plaque in Leeds

After his return to Leeds in May 1887,[9] Le Prince built and then patented, a single-lens camera. It was first used[citation needed] on 14 October 1888 to shoot what would become known as Roundhay Garden Scene, presumably the world's first motion picture. Le Prince later used it to shoot trams and the horse-drawn and pedestrian traffic on Leeds Bridge (the movie was shot from Hicks the Ironmongers, now the British Waterways building, a building on the south east side of the bridge,[3] a blue plaque marks the spot). These pictures were soon projected on a screen in Leeds, making it the first motion picture exhibition.

In September 1890, Le Prince was preparing to go back to the UK to patent his new camera, followed by a trip to the US to promote it. Before his journey, he decided to return home and visit friends and family. Having done so, he left Bourges on 13 September to visit his brother in Dijon. He would then take the 16 September train to Paris, but when the train arrived, his friends discovered that Le Prince was not on board.[10] He was never seen again by his family or friends.[3] No luggage nor corpse was found in the Dijon-Paris express nor along the railway. No one saw Le Prince at the Dijon station, except his brother. No one saw Le Prince in the Dijon–Paris express after he was seen boarding it. No one noticed strange behaviour or aggression in the Dijon-Paris express.[10]

The French police, Scotland Yard and the family undertook exhaustive searches but never found his body or luggage. This mysterious disappearance case was never solved. Four main theories have been proposed:

Le Prince was officially declared dead in 1897.[15] A photograph of a drowning victim from 1890 resembling Le Prince was discovered in 2003 during research in the Paris police archives.[8]

Even though Le Prince's solo achievement is unchallenged, except for proponents of William Friese-Greene, his work has been long forgotten since he disappeared on the eve of the first public demonstration of the result of years of toil in his Leeds workshop and test conducted at the New York Institute for the Deaf. His pursuit of trademarks over in the United States, the dominance and influence of his countryman rival Thomas Edison, founder of the oligopolistic Edison Trust, became unstoppable.

For the April 1894 commercial exploitation of his personal kinetoscope Parlor, Thomas Edison is credited as the inventor of cinema in the USA, while in France, the Lumière Brothers, are coined inventors of the Cinématographe device and inventor of cinema for the first, collective, commercial exploitation of motion picture films in Paris. Like Le Prince, another untold proto-cinema figure is the French inventor, Léon Bouly, who created the first "Cinématographe" device and patented it in 1892 (Patent N°219,350). He was never credited, and two years later his left unpaid patent was bought by the Lumière Brothers (Patent N°245,032).

In France, an appreciation society was created as "Association des Amis de Le Prince" ("Association of LePrince's friends") which still exists in Lyon.

In 1992, the Japanese filmmaker Mamoru Oshii (Ghost in the Shell) directed Talking Head an avant-garde feature film paying tribute to the cinematography history's tragic ending figures such as George Eastman, Georges Méliès and Louis Le Prince who is credited as "the true inventor of eiga", Japanese for "motion picture film". 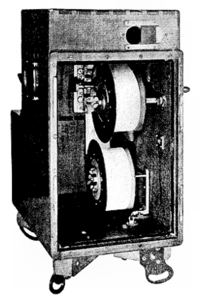 Le Prince developed his single-lens type camera in a workshop at 160 Woodhouse Lane, Leeds. An updated version of this model was used to direct his motion-picture films. Remaining production consists of a scene in the garden at Oakwood Grange (his wife's family home, in Roundhay), another at Leeds Bridge and an Accordion Player.

These world's first motion picture films do not exist anymore, as Le Prince's body and effects disappeared two years later, but parts of the original paper film strips remaining in the camera (Mark II) were found[citation needed] and exploited later.

Half a century later, Le Prince's widow gave the remaining apparatus to the National Science Museum, London (it's now in the National Museum of Photography, Film and Television (NMPFT), Bradford, which opened in 1983 and in 2006 was renamed the National Media Museum). In May 1931, photographic plates were produced by workers of the Science Museum from paper print copies provided by Marie Le Prince.[4] In 1999, the copies were restored, remastered and re-animated to produce a digital version which was uploaded on to the NMPFT website as public resources ("Roundhay" & "Leeds"). These versions are running at the modern cinématographe 24 frames per second (frame/s) rate (Roundhay Garden at 24.64 frame/s and Leeds Bridge at 23.50frame/s), but Le Prince used the frame-rate adjust device built into his apparatus to test various speeds. According to Adolphe Le Prince, who assisted his father at Leeds, Roundhay Garden is believed to have been shot at 12 frame/s and Leeds Bridge at 20 frame/s.[16]

Since the NMPFT release, various names are used to designate the untitled films, such as "Leeds Bridge" or "Roundhay Garden Scene". Actually, all current online versions (e. g., GIF, FLV, SWF, OGG, WMV, etc.) are derived from the NMPFT files, and these tentative titles are not canon to Le Prince whose mother tongue was French. However, "Leeds Bridge" is believed to be the original title, as the traffic sequence was referred as such by Frederic Mason, Le Prince's mechanic.

The last remaining production of Le Prince's 16-lens camera is a frame sequence of a man walking around a corner. It is believed to have been shot with the 16-lens type but this is unsure as it appears as if it has been made with a single glass plate not an Eastman American film.

An amateur remastering of all 16 frames is on YouTube here. The individual frames used are on Flickr here.

The 1931 National Science Museum copy of the remaining film sequence shot in Roundhay garden features 20 frames (run time 1.66 seconds at 12 frame/s). The digital version produced by the NMPFT has 52 frames (run time 2.11 seconds at 24.64 frame/s) and switches the left side and the right side, since the house is actually incorrectly shown on the right-hand side of the scene in the 1931 copy. It is believed to have been mirrored because of paper parts stuck on the left side of the film that would reduce the visibility. The reason is both physiologic and cultural, a Western viewer's eyes are used to automatically watch from top left to right, this reflex action comes from the childhood taught reading direction. The garden sequence film's damaged side results in distortion and deformation on the inverted, right side of the digital movie. The scene was shot in Le Prince's father-in-law's garden at Oakwood Grange, Roundhay on October 14, 1888.

The last remaining film of Le Prince's single-lens camera is a sequence of frames of Adolphe Le Prince playing a diatonic button accordion. It was recorded on the steps of the house of Joseph Whitley, Adolphe's grandfather.[4] The recording date is probably 1888. The NMPFT has not remastered this film. An amateur remastering of the first 17 frames is on YouTube here.