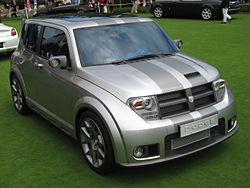 The Dodge Hornet is a concept car mini MPV designed and developed by Dodge and revealed in 2006.[1] Dodge's first attempt at building a car this small, the car was expected to be released in 2010, but following the 2009 financial crisis and the restructuring of the Chrysler Group, the concept was dropped.[2]

The Hornet was to be the first fruit from the cooperation between Chrysler and Nissan,[3] and following the merger with Fiat in late 2010, it took on a new, yet unrevealed identity, which will more likely share Fiat's 199 platform with the Alfa Romeo MiTo.[4] Designed to compete against the Mini (BMW),[3] the Hornet is expected to be released somewhere between 2011 and 2013. In May 2011, Chrysler has stated that a subcompact vehicle with a new model name is expected for release in late 2011, as the first of the 2012 lineup.[5]

According to Dodge it is a rally inspired design based on the Jeep Compass platform, powered by a 1.6 L supercharged 4-cylinder Tritec engine rated at 170 hp (127 kW). This engine was manufactured in a Chrysler-BMW joint venture in Brazil.[6][7]

The Hornet name originates with the Hudson Hornet built by Hudson Motor Car Company, later the American Motors Corporation (AMC), from 1951 to 1957. The AMC Hornet was the second car to use the Hornet name from 1970 to 1977. AMC was acquired by Chrysler (Dodge's parent) in 1987.

A car purported to be a Dodge Hornet test vehicle was photographed in September of 2011. The car is now a traditional sedan/hatchback based on the Alfa Romeo Giulietta, an altogether different platform from the concept vehicle.[8]