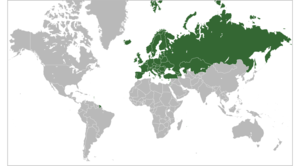 UEFA represents the national football associations of Europe, runs Europewide national and club competitions, and controls the prize money, regulations and media rights to those competitions. Several national football associations which are geographically in or mostly in Asia belong to UEFA rather than the (AFC). These nations are , Georgia, , , , , and (Israel and Kazakhstan are former AFC members). chose to be classed as a European football nation - it had the choice of Europe, Asia or Africa.

UEFA is one of the biggest of six continental confederations of . Of all the confederations, it is by far the strongest in terms of wealth and influence over the global game. Virtually all of the world's top players play in European leagues in part due to the salaries available from the world's wealthiest football clubs, particularly in England, Germany, Italy and Spain. Many of the world's strongest national sides are in UEFA. Of the 32 available spots in the , 14 were allocated to UEFA national teams, and currently 14 of the top 20 teams in the are UEFA members.

UEFA was founded on 15 June 1954 in , following discussions between the French, Italian and Belgian FAs. The headquarters was in Paris until 1959 when the organization moved to . was the first General Secretary and the president. Its administrative center since 1995 is in , . It was initially made up of 25 national associations. Currently there are 53 associations (see the bottom of this page or "List of UEFA national football teams").

UEFA, as a representative of the national associations, has had a number of bruising clashes with the . In the 1990s the issues of television rights and especially international transfers (the ) have had to undergo some major changes to remain in line with European law.

The current UEFA President is .

The main competition for men's national teams is the , started in 1958, with the first finals in 1960, and known as the European Nations Cup until 1964. UEFA also runs national competitions at Under-21, Under-19 and Under-17 levels. For women's national teams, UEFA operates the for senior national sides and the at under-19 level, since 2008 there is a for under-17 sides.

UEFA also organizes the with CAF for youth teams.

In there is the .

UEFA also runs the two main club competitions in Europe: the was first held in 1955, and was known as the European Champion Clubs Cup (or just European Cup) until 1991; and the , for national knockout cup winners and high-placed league teams, was launched by UEFA in 1971 as a successor to the (also begun in 1955 but not recognized by UEFA

The was a summer competition, previously operated by several football associations, which was relaunched and recognized as European official competition by UEFA in 1995 as a qualifying competition for the UEFA Cup. The last Intertoto Cup took place in 2008. Recently, UEFA launched the , for semi-professional teams. UEFA also conducts the for women's club teams.

In futsal there is the .

The was jointly organised with between the Champions League and the winners.

Only three teams (Ajax, Bayern Munich and Juventus) have won each of the three main competitions (European Cup-UEFA Champions League, UEFA Cup Winner's Cup and UEFA Cup) , a feat that is no longer possible for any team that did not win the Cup Winners' Cup. There are currently nine teams throughout Europe that have won two of the three trophies; all have won the Cup Winners Cup, four require a win in the Champions League and five require a UEFA Cup win.

Juventus is the only team in to win all UEFA's official championships and cups and, as the first side in the history of the European football to have won the three major UEFA competitions, have received "The UEFA Plaque" by the Union of European Football Associations in

The following UEFA members have competed in the following s. Teams are sorted by number of appearances.

*NOTE: FIFA considers Germany to carry West Germany's record; Serbia to carry Serbia and Montenegro, Yugoslavia FR, and Yugoslavia's records; Czech Republic to carry Czechoslovakia's record; and Russia to carry USSR's record. [PDFlink| [http://www.fifa.com/infoplus/IP-201_08A_FWC-alltimeranking.pdf alltime ranking of worldcup participants] www.fifa.com, February, 5th, 2007]
*Montenegro applied for membership in UEFA and FIFA on 30 June 2006, was admitted to UEFA on 26 January 2007, and was admitted to FIFA on 31 May 2007.