UNIDO believes that competitive and environmentally sustainable industry has a crucial role to play in accelerating economic growth, reducing poverty and achieving the Millennium Development Goals. The Organization therefore works towards improving the quality of life of the world's poor by drawing on its combined global resources and expertise in the following three interrelated thematic areas:

Activities in these fields are strictly aligned with the priorities of the current United Nations Development Decade and related multilateral declarations, and reflected in the long-term vision statement, business plan and mid-term programme frameworks of UNIDO.

In order to fulfill these objectives, UNIDO

UNIDO was established as a UN programme in 1966 with headquarters in Vienna, Austria, and became a specialized agency of the United Nations in 1985.

Presently, 173 states are members of UNIDO.[2] The organization employs some 650 staff at Headquarters and in field representations in about 80 countries, and draws on the services of some 2,800 international and national experts (approx. 50% from developing countries) annually, who work in project assignments throughout the world. In 2007, UNIDO had around 850 technical cooperation projects in around 120 countries.

UNIDO's headquarters are located at the Vienna International Centre, the UN campus that also hosts the International Atomic Energy Agency, the United Nations Office on Drugs and Crime and the Preparatory Commission for the Comprehensive Test Ban Treaty Organization.

As a primary driver of economic growth and employment creation, the private sector has a central role in poverty reduction and the achievement of the Millennium Development Goals. Private sector-led industrial development makes a significant contribution to bringing about the much needed structural changes that can set the economies of poor countries on a path of sustained economic growth. UNIDO's services therefore focus on encouraging the creation of decent employment and income to overcome poverty. These services are customized for developing countries and range from industrial policy advice to entrepreneurship and SME development, and from investment and technology promotion to the provision of rural energy for productive uses.

Fundamental changes in the way societies produce and consume are indispensable for achieving global sustainable development and fighting climate change. UNIDO therefore promotes sustainable patterns of industrial consumption and production to de-link the processes of economic growth and environmental degradation. UNIDO is a leading provider of services for improved industrial energy efficiency and the promotion of renewable sources of energy. It also assists developing countries in implementing multilateral environmental agreements and in simultaneously reaching their economic and environmental goals.

The origins of UNIDO 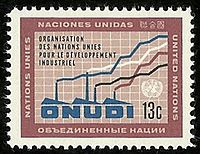 ONUDI in French and Spanish

The origins of the United Nations Industrial Development Organization (UNIDO) can be traced to a series of studies on a programme of rapid industrialization of developing countries that the United Nations Secretariat carried out during the early 1950s at the request of the United Nations Economic and Social Council (ECOSOC). These studies culminated in a programme of work on industrialization and productivity prepared by the United Nations Secretary-General in 1956 and endorsed the next year by ECOSOC and the General Assembly. At that time, it was first suggested that a special body to deal with the problems of industrialization be established, whose political organs could relieve ECOSOC and the General Assembly of the detailed consideration of those questions and whose secretariat could carry out more substantive work than the existing Industry Section of the Bureau of Economic Affairs within the Secretariat. The Industry Section of the Secretariat became a branch in 1959, and in 1962 it became the Industrial Development Centre, headed by a Commissioner for Industrial Development.

UNIDO as a special organ of the United Nations

In the aftermath, proposals for further institutionalizing industrial development-related issues within the UN were considered by various advisory groups and inter-organizational organs. Subsequently, the United Nations General Assembly created the UNIDO in November 1966 as a special organ of the United Nations.[5] In January 1967, the Organization was formally established with Headquarters in Vienna, Austria. Compared to the Industrial Development Centre, UNIDO's creation was intended to broaden the work of its predecessor. Besides normative activities, such as acting as a forum for discussions, analytical functions and information dissemination, UNIDO became involved in operational activities, i.e. in technical co-operation activities.

Conversion into a specialized agency

The setting up of UNIDO as a special organ had nonetheless been a compromise solution. The developing countries (the Group of 77) had in the first instance promoted the idea of a specialized agency with its own political decision-making governing bodies and autonomy in budgetary matters. The same position was advocated by several high-level expert groups and intergovernmental committees during the following years. In the context of the General Assembly's adoption of the Declaration and Programme of Action on the Establishment of a New International Economic Order and of the Charter of Economic Rights and Duties of States, UNIDO's second General Conference, held in 1975 in Lima, Peru, adopted the Lima Declaration on Industrial Development and Cooperation. For the first time, industrial development objectives were quantified internationally — the Lima Target anticipated the developing countries to attain a twenty-five per cent share of world industrial production by the year of 2000. As part of the institutional arrangements of the Lima Plan of Action, and with a view to assisting in the establishment of a New International Economic Order, it was recommended to the General Assembly that UNIDO be converted into a specialized agency.

An intergovernmental committee prepared a draft constitution, which was adopted in Vienna in 1979. However, the objections and doubts of industrialized countries as to the necessity of a specialized agency contributed to delaying the ratification process. In order to ensure that the new organization would start up with a membership including substantially all significant States, the General Assembly, by resolutions adopted in 1982 and 1984, called for a series of formal consultations among prospective Member States, which eventually led to a general agreement that the new UNIDO Constitution should enter into force. All necessary formal requirements were fulfilled in 1985, and in December of the same year, UNIDO finally became the sixteenth Specialized Agency of the United Nations with Headquarters in Vienna.

Crisis and reform during the 1990s

During the subsequent years, UNIDO continuously expanded particularly its operational activities. However, several developments outside and inside the Organization led to a crisis, which reached a breaking point in 1997 when UNIDO faced the risk of closure: After the end of the Cold War and the triumph of the market economic system over the command economic system, and in view of the Washington Consensus that limited the role of industrial policy in economic development processes, some Member States felt that industrial development could be supported more effectively and efficiently by the private sector. As a result, Canada, the United States (UNIDO's then largest donor), and Australia subsequently withdrew from the Organization between 1993 and 1997. Simultaneously, the continued slowdown in the economies of some major industrialized countries as well as the financial turmoil of the 1997 Asian financial crisis caused multilateral development assistance to decline. In addition, a weak management structure and lack of focus and integration of UNIDO's activities contributed to aggravate the crisis.

UNIDO's Member States responded by adopting a stringent Business Plan on the Future Role and Functions of the Organization in June 1997. Activities laid out in the Business Plan are based on the clear comparative advantages of UNIDO, while avoiding overlap and duplication with other multilateral institutions. A key point was that activities should be integrated into packages of services, rather than being provided on a stand-alone basis. The Organization radically reformed itself on the basis of this business plan and streamlined its services, human and financial resources as well as internal processes during the following years.

On the basis of sound finances and in a second wave of programmatic reforms in 2004, UNIDO further focused its activities and technical services directly responding to international development priorities. In an independent assessment of 23 international organizations against a large numbers of criteria, UNIDO was assessed 6th best overall and as best in the group of specialized agencies.[6] In regard of the current UN Reform debate, it can be observed that UNIDO is actively contributing to UN system-wide coherence and cost efficiency.

Members of the UN, or of UN specialized agencies, or of the IAEA, are eligible for membership with UNIDO.[7] The process of becoming a Member of the Organization is achieved by becoming a party to the Constitution. Observer status is open, upon request, to those enjoying such status in the General Assembly of the United Nations, unless the UNIDO General Conference decides otherwise. The Conference has the authority to invite other observers to participate in the work of the Organization in accordance with the relevant rules of procedure and the provisions of the Constitution.

The lists, originally defined in General Assembly resolution 2152 and the UNIDO Constitution serve to balance geographical distribution of member states' reprensentation on the Industrial Development Board[9] and the Programme and Budget Committee.[10]

UNIDO is the one of the two UN specialized agencies where members are separated into groups while the other is IFAD. UNIDO List B, is similar to IFAD List A - which comprises primarily developed countries,[11] while the set of the rest of UNIDO members is similar to the set of the rest of IFAD members - which comprise primarily developing countries.[11]

The full lists are as follows:

Signatory states that have not yet finished their ratification procedures are: Antigua and Barbuda (1982).[12]

The Holy See and the Sovereign Military Order of Malta have observer status[13] with UNIDO.

The policy-making organs (or governing bodies) of UNIDO are based on their predecessors that were effective prior to UNIDO becoming a specialized agency. Thus, the General Conference, the Industrial Development Board (IDB) and the Programme and Budget Committee (PBC) are anchored in the Constitution.

The Conference is the highest policy-making organ of the Organization and consists of all Member States of UNIDO. It meets every two years and approves the programme and budgets, establishes the scale assessments for regular budget expenditures for the forthcoming biennium and, every second time, appoints the Director-General for a period of four years.

The Board meets once in Conference years and twice in other years, and consists of 53 Member States[17] of the Organization that are elected for a four-year term. It acts as a preparatory body for the Conference and reviews the implementation of the approved programme of work and of the corresponding regular and operational budgets for the forthcoming biennium. Among its other main functions, the Board recommends to the Conference a scale of assessments, as well as a candidate for the post of Director-General.

The Committee consists of 27 Member States[18] of the Organization that are elected for a two-year term and meets at least once a year to consider, inter alia, the proposals of the Director-General for the programme of work and corresponding estimates for the regular and operational budgets.

The Secretariat of UNIDO is based in Vienna (Austria) and maintains representative offices in Brussels (Belgium), Geneva (Switzerland) and New York (USA). As of 2010, UNIDO's organizational structure comprises[19] The Office of the Director-General (ODG), the Programme Development and Technical Cooperation Division (PTC), the Regional Strategies and Field Operations Division (RSF), the Programme Support and General Management Division (PSM) as well as offices of Internal Oversight and Legal Services.

The current (2010) Director-General of UNIDO, Mr. Kandeh K. Yumkella (Sierra Leone), was elected by Member States in December 2005. He was re-elected for a second four-year term in December 2009.

In order to provide additional support to UNIDO's technical activities, different types of technical offices have been established. These include: