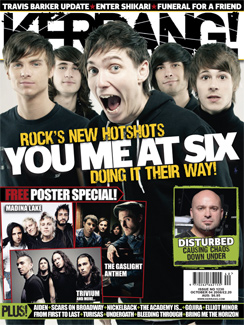 "Kerrang!" is a weekly rock published by Bauer Consumer Media in the .

The magazine's title is onomatopoeic and derives from the noise made when smashing an electric guitar.

"Kerrang!" was first published on the , , edited by [cite web|url=http://rockcriticsarchives.com/interviews/geoffbarton/geoffbarton.html|title=Geoff Barton, behind the wheel|Publisher=RockCritics.com] , initially as a one-off supplement in the "Sounds" newspaper devoted to the current (or 'NWOBHM' for short) and the rise of other hard rock acts such as , who appeared on "Kerrang!"’s first cover.

During the 1980s and early 1990s the magazine placed many thrash and acts on the cover (like , , , , Poison, Testament) but later discarded them when grunge acts such as Nirvana rose to fame. Readers often criticise the magazine for repeating this process every time a new musical trend becomes popular; for example, was heavily featured around the time of the release of , including a cover, and there are also issues in the 1980s featuring and . More recently, there are many complaints about "Kerrang!"'s current emphasis on emo and music, particularly stemming from the fact that the magazine continually printed issues with on the front cover for several weeks, following the release of their album, ""

"Kerrang!"'s most successful period came under editor Paul Rees at the turn of the millennium, at which time, the genre, featuring bands such as and , were becoming more popular. Rees went on to edit "Q" and Ashley Bird took over as editor from 2003 to 2005. Unfortunately for Bird, the decline of nu metal in 2003 meant "Kerrang!"’s sales went quickly into decline [ [http://www.roadrun.com/Blabbermouth.net/news.aspx?mode=Article&newsitemID=14459 Blabbermouth.net] ] which eventually prompted his sacking.Fact|date=April 2007

"Kerrang!" also includes a satirical comic strip called "Pandora" (originally "Pandora Peroxide" [cite web|url=http://www.rayzell.com/auntiep.html|title=Takin' the Auntie P our of Pandora Peroxide|publisher=Ray Zell] ), named for its main character, who is seen every week making fun of recent events in the rock world. The strip is written and drawn by Ray Zell. Other characters include Wek and Web. Wek, the "work experience kid" is a love interest who leaves Pandora and opens a . He is featured occasionally in strips. Web replaced Wek, and is a "work experience brat". Web has an obsession with of the band HIM. She even has a locket with one of Ville's discarded cigarette butts in it. Other minor characters included in the series are: Auntie P (the original Pandora Peroxide), Orgasm Girl, Billy and Bludwyn.

"Main|Kerrang! 105.2"In 2000 launched "Kerrang!" as a digital radio station, across the UK. On June 10 2004, was launched as a regional radio station in with an advertising campaign by London-based creative agency [http://www.thankodd.com ODD] . During the day the "Kerrang!" Radio network broadcasts more accessible acts such as , Oasis and . In the evening and at weekends they have a number of specialist programmes dedicated to the many subgenres of rock music.

The radio output includes interviews with those affecting popular culture and society as well as those involved with music, e.g. the scientist .

In 2006 "Kerrang!" stated on their website that they are trying to bring a radio station to South Wales.Fact|date=June 2007

Since 1993, the magazine have been holding an annual awards ceremony to mark the most successful bands in the interests of their readers. The annual poll, which runs alongside the awards usually bears a likeness to those who win at the ceremony. Although in recent years, the winners do not bear such a resemblance to the opinion of the general public, the awards still have an importance in the media coverage a band receive after winning an award.

Many rock acts see these awards as important to win if nominated. The 17th edition of the "", highlights 's award win in 2003 for "Best British Band" in their annual-round up of the year, including 's Hall of Fame induction.

"Main|Kerrang! TV"In 2001 launched . As with the radio station, the TV channel covers the more mainstream side of the rock music as well as bands like , and .

Kerrang TV is now a joint venture between Bauer Consumer Magazines and Channel 4. The current 'Head Of Music' is Mark Adams.

In 2001 Kerrang launched its own online forum with the "rants and raves" section taking up most of the traffic. Though initially extremely popular, the number of users began to peter out around 2005 with the number of people online dropping to as low as 10 when previously it had been closer to the 100 figure.