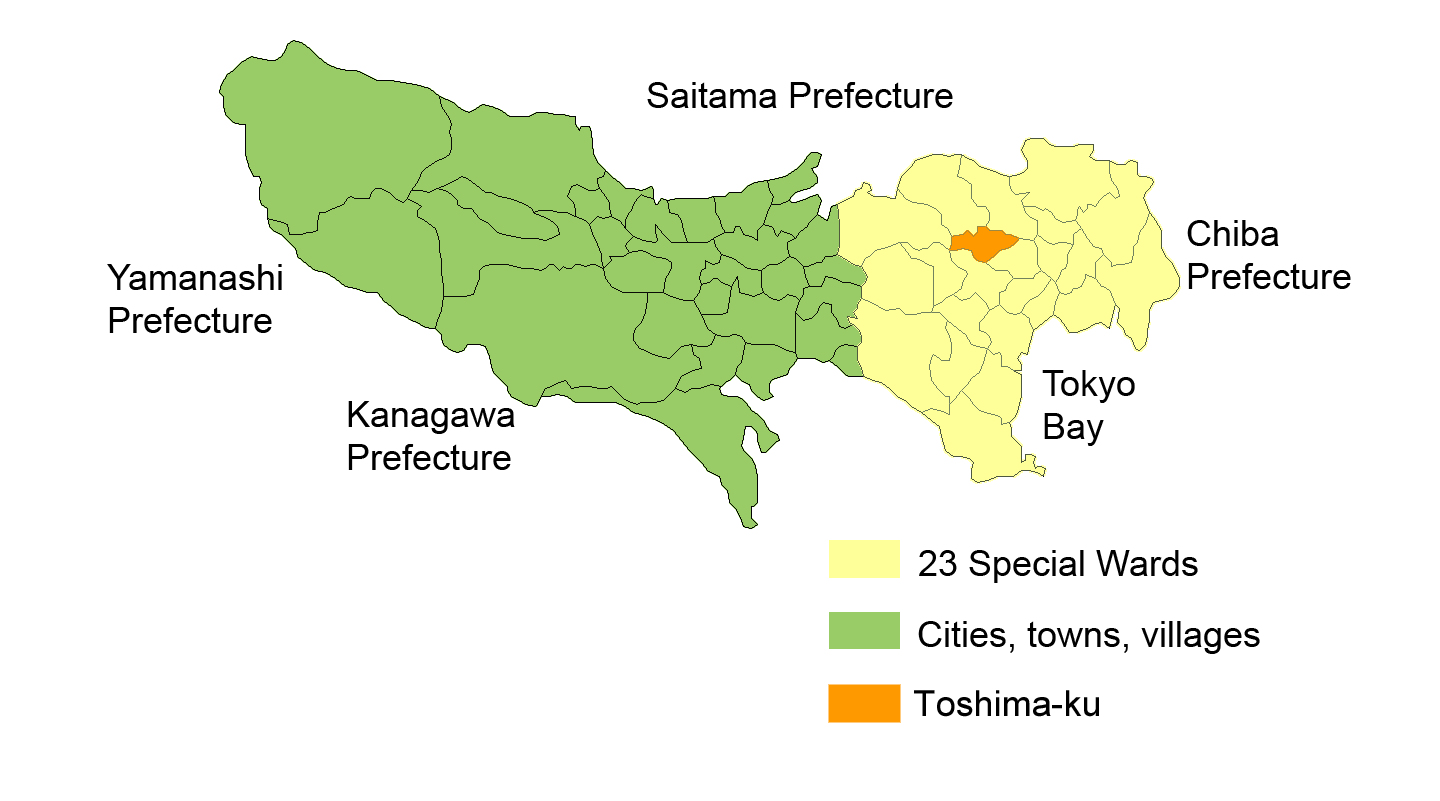 nihongo|Toshima|豊島区|Toshima-ku is one of the 23 special wards of , . Located in the north-west corner of the ward area, Toshima is bordered by the cities of Nerima, Itabashi, and Kita in the north, and Shinjuku and Bunkyo in the south.

The ward was founded on , and reached a peak resident of 370,000 in 1965. The population has continued to decline and as of , , the ward had an estimated population of 252,011 with a density of 19,370 persons per km². During the day the population swells with commuters, resulting in a daytime population of around 430,000.

The total land area of Toshima is 13.01 km², sitting on a moderate plateau with a difference of 28 meters between the ward's highest and lowest points. Approximately 47% of Toshima's land is and 20% is used for commercial enterprises and public areas.

Though Toshima is a ward, it refers to itself as a city. The ward offices are located in , which is also the commercial and entertainment centre of Toshima.

With a non-Japanese population of 15,516, or 6.16% of the total population, Toshima is one of the most international wards in Tokyo. Of the foreign population, 56% is of Chinese descent, 20% is of Korean descent, followed by Filipinos.

Toshima was originally formed from four towns bordered by the quickly expanding former city of Tokyo in 1932; Sugamochō, Nishi-sugamochō, Takadachō, and Nagasakichō.

Evolving from a suburban agricultural district in the to the urban commercial centre that it is today, Toshima's growth was fueled by the construction of various rail lines built during the Meiji and Taishō periods.

The former Somei village, now part of Toshima, is the birthplace of the "", Japan's most popular variety of (cherry blossom tree). The variety was developed at the end of the Edo period.

Toshima is run by a city assembly of 36 elected members. The current mayor is Yukio Takano, an independent backed by all major parties except the .

* Sunshine City:The focal point of much of the entertainment in and around Ikebukuro, Sunshine City sports some of the best shopping and dining in Toshima.
* The Ancient Orient Museum
* Morikazu Kumagai Art Museum
* Tokyo Metropolitan Art Space:Near , this facility built in 1990 is one of the newer spots in Toshima and sports a concert hall with regular performances and art exhibitions. There is a stage in the open space out front and it is a popular place for amateur musicians during the warmer months.
* Myonichikan of Jiyu Gakuen:Designed by famous American , this notable building was completed in 1922, shortly before he completed work on the .
* Jizodori; the shopping district known as "old ladies' "

* Fukuro Matsuri:Started in 1968, this festival features a parade of (portable shrines) and a yassa dance. It is held on and 15 of each year outside the west exit of Ikebukuro Station and can gather as many as 200,000 people.
* Otsuka Awa Odori Dance:A large summer event gathering 150,000 people, this festival features groups performing and competing with colorful costumes and dancing in front of JR Ōtsuka Station.
* Nagasaki Shishimai (The ):Performed every year on the second Sunday of May at Nagasaki Shrine.

There are four Universities in Toshima:
*
*
* or St. Paul's University
*

The main hub for rail transportation in Toshima ward is , the second busiest train station in Japan.