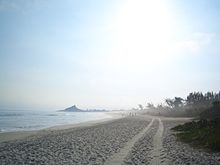 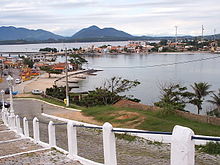 A view of Saquarema's lake and church steps

Saquarema (Portuguese pronunciation: [ˌsakwɐˈɾẽmɐ]) is a town and a municipality located in the Brazilian state of Rio de Janeiro. Its population was 61,591 (2005) and its area is 355 km².[1] It is located almost 100 km east of Rio de Janeiro.[2] It is known as Brazil's surfing capital.

During the mid-19th century, the Conservative Party and its leaders were known as "Saquarema" because of their base of support here.

Itaúna Beach is one of Saquarema's most famous beaches and is the stage of professional volleyball and surfing championships. Other notable beaches are Barra Nova, Boqueirão, Jaconé, Vilatur and Vila.

Surfing is the major sport in the city. The city was also chosen by the Brazil national volleyball team for volleyball training and the main center for athletes of the Brazilian Volleyball Confederation. Paragliding and hang gliding are popular as well.

A Igreja Nossa Senhora de Nazareth (The Church of Our Lady of Nazareth) sits on a cliff above the town's lake and coastline and is a center for religious and cultural tourism.