The ukulele, ew-kə-leh-leh;[1] from Hawaiian: ʻukulele [ˈʔukuˈlɛlɛ]; it is a subset of the guitar family of instruments, generally with four nylon or gut strings or four courses of strings.[2]

The ukulele originated in the 19th century as a Hawaiian interpretation of the cavaquinho or braguinha and the rajao, small guitar-like instruments taken to Hawaiʻi by Portuguese immigrants.[3] It gained great popularity elsewhere in the United States during the early 20th century, and from there spread internationally.

The tone and volume of the instrument varies with size and construction. Ukuleles commonly come in four sizes: soprano, concert, tenor, and baritone.

Ukuleles are commonly associated with music from Hawaii where the name roughly translates as "jumping flea",[4] perhaps due to the action of one's fingers playing the ukulele resembling a "jumping flea". According to Queen Lili'uokalani, the last Hawaiian monarch, the name means “the gift that came here”, from the Hawaiian words uku (gift or reward) and lele (to come). Developed in the 1880s, the ukulele is based on two small guitar-like instruments of Portuguese origin, the cavaquinho and the rajao, introduced to the Hawaiian Islands by Portuguese immigrants from Madeira and Cape Verde.[5] Three immigrants in particular, Madeiran cabinet makers Manuel Nunes, José do Espírito Santo, and Augusto Dias, are generally credited as the first ukulele makers.[6] Two weeks after they landed aboard the Ravenscrag in late August 1879, the Hawaiian Gazette reported that "Madeira Islanders recently arrived here, have been delighting the people with nightly street concerts."[7]

One of the most important factors in establishing the ukulele in Hawaiian music and culture was the ardent support and promotion of the instrument by King David Kalakaua. A patron of the arts, he incorporated it into performances at royal gatherings.[8] 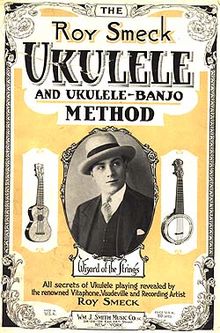 Cover of a 1928 instructional book for the ukulele by Roy Smeck, the "Wizard of the Strings"

The ukulele was popularized for a stateside audience during the Panama Pacific International Exposition, held from spring to fall of 1915 in San Francisco.[9] The Hawaiian Pavilion featured a guitar and ukulele ensemble, George E. K. Awai and his Royal Hawaiian Quartet,[10] along with ukulele maker and player Jonah Kumalae.[11] The popularity of the ensemble with visitors launched a fad for Hawaiian-themed songs among Tin Pan Alley songwriters.[12] The ensemble also introduced both the lap steel guitar and the ukulele into U.S. mainland popular music,[13] where it was taken up by vaudeville performers such as Roy Smeck and Cliff "Ukulele Ike" Edwards. On April 15, 1923 at the Rivoli Theater in New York City, Smeck appeared, playing the ukulele, in Stringed Harmony, a short film made in the DeForest Phonofilm sound-on film process. On August 6, 1926, Smeck appeared playing the ukulele in a short film His Pastimes, made in the Vitaphone sound-on-disc process, shown with the feature film Don Juan starring John Barrymore.[14] 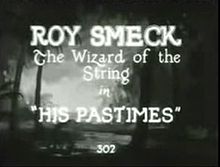 Opening title for the short Vitaphone film His Pastimes (1926)

The ukulele soon became an icon of the Jazz Age.[15] Highly portable and relatively inexpensive, it also proved popular with amateur players throughout the 1920s, as is evidenced by the introduction of uke chord tablature into the published sheet music for popular songs of the time,[15] a role that would eventually be supplanted by the guitar in the early years of rock and roll.[16] A number of mainland-based instrument manufacturers, among them Regal, Harmony, and Martin, added ukulele, banjolele, and tiple lines to their production to take advantage of the demand.

From the late 1940s to the late 1960s, plastics manufacturer Mario Maccaferri turned out about 9 million inexpensive ukuleles.[17] The ukulele continued to be popular, appearing on many jazz songs throughout the 50s, 60s, and 70s.[18] Much of the instrument's popularity was cultivated via The Arthur Godfrey Show on television.[19] Singer-musician Tiny Tim became closely associated with the instrument after playing it on his 1968 hit "Tiptoe Through the Tulips".

After the 1960s, the ukulele declined in popularity until the late 1990s, when interest in the instrument reappeared.[20] During the 1990s, new manufacturers began producing ukuleles and a new generation of musicians took up the instrument.

Hawaiian musician Israel Kamakawiwo'ole helped popularise the instrument, in particular due to his 1993 ukulele medley of "Over the Rainbow" and "What a Wonderful World", used in several films, television programs, and commercials. The song reached #12 on Billboard's Hot Digital Tracks chart the week of January 31, 2004 (for the survey week ending January 18, 2004). 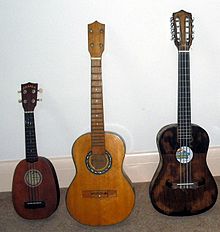 Ukuleles in a music store.

Ukuleles are generally made of wood, although variants have been made composed partially or entirely of plastic. Cheaper ukuleles are generally made from ply or laminate woods, in some cases with a soundboard of an acoustically superior wood such as spruce. Other more expensive ukuleles are made of solid hardwoods such as mahogany (Swietenia spp.). Some of the most expensive ukuleles, which may cost thousands of dollars, are made from koa (Acacia koa), a Hawaiian wood.

Typically ukuleles have a figure-eight body shape similar to that of a small acoustic guitar. They are also often seen in non-standard shapes, such as cutaway shape and an oval, usually called a "pineapple" ukulele, invented by the Kamaka Ukulele company, or a boat-paddle shape, and occasionally a square shape, often made out of an old wooden cigar box.

These instruments may have just four strings; or some strings may be paired in courses, giving the instrument a total of six or eight strings.

Instruments with 6 or 8 strings in 4 courses are usually called taropatch ukuleles, and used to be common in a concert size, but now the tenor size is more common for 8-string taropatch ukuleles. The 6 string, 4 course version, has 2 single and 2 double courses, and is sometimes called a Lili'u, although this name is also applied to the 8-string version, nowadays. [25]

Four sizes of ukuleles are common: soprano, concert, tenor, and baritone. There are also less common sopranino, with a nut to bridge of under 13 inches, which is seeing more popularity and bass ukuleles at the extreme ends of the size spectrum.

The soprano, often called "standard" in Hawaii, is the smallest, and the original size ukulele. The concert size was developed in the 1920s as an enhanced soprano, slightly larger and louder with a deeper tone. Shortly thereafter, the tenor was created, having more volume and deeper bass tone. The largest common size is the baritone, created in the 1940s.

Traditional standard tuning for the soprano ukulele was D6-tuning: A4 D4 F#4 B4, but today many people favor the C6 tuning instead: G4 C4 E4 A4. The standard tuning for concert, and tenor ukuleles is C-tuning, G4 C4 E4 A4. The g string is tuned an octave higher than might be expected. This is known as reentrant tuning. Some prefer "Low G" tuning on the tenor, with the G in sequence an octave lower. The baritone is usually tuned to D3 G3 B3 E4 (low to high), which is the same as the highest four strings of the standard 6-string guitar.

Another common tuning for concerts is D-tuning, D4 F#4 B4, one step higher than the G4 C4 E4 A4 tuning. D tuning is said by some to bring out a sweeter tone in some ukuleles, generally smaller ones. This tuning was commonly used during the Hawaiian music boom of the early 20th century, and is often seen in sheet music from this period. D tuning with a low 4th, A3 D4 F#4 A4 is sometimes called "Canadian tuning" after its use in the Canadian school system, mostly on concert or tenor ukes.

Hawaiian ukuleles may also be tuned to open tunings, similar to the Hawaiian slack key style.[28]

Ukulele varieties include hybrid instruments such as the guitalele (also called guitarlele), banjo ukulele (also called banjulele), harp ukulele, and lap steel ukulele. There is an electrically amplified version, the electric ukulele. The resonator ukulele is louder and of different tone quality from traditional wooden ukuleles, producing sound by one or more spun aluminum cones (resonators) instead of the wooden soundboard. The Tahitian ukulele, another variant, is usually carved from a single piece of wood and does not have a hollow soundbox.

Close cousins of the ukulele include the Portuguese forerunners, the cavaquinho (also commonly known as machete or braguinha) and the slightly larger rajao. Other stringed variants include the Puerto Rican bordonua, the Venezuelan cuatro, the Colombian tiple, the timple of the Canary Islands, the Spanish vihuela, and the Andean charango traditionally made of an armadillo shell. In Indonesia, a similar Portuguese-inspired instrument is the kroncong.