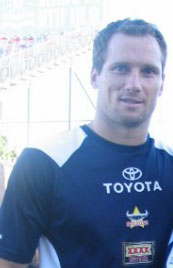 Paul Bowman (born , in ) is an n former professional footballer. He played his entire career for the in the competition. He is the current Cowboys' assistant coach.

With 203 games, Bowman has played the most games for the Cowboys and was the last player from the Cowboys' inaugural season to be still playing for the club in 2007. Renowned as one of the best defensive centres in the competition, Bowman has also represented Queensland in the State of Origin competition twelve times since 2000. He scored two tries in game III of the 2003 Origin series

Bowman captained the Cowboy's between 2001 and 2004. In game 1 of the Bowman suffered medial ligament and cartilage damage to his left knee in an awkward tackle that would see him sidelined for four weeks. Remarkably however, despite being unable to walk, he stayed on the field as long as possible, still managing to make several tackles before getting a chance to leave the field.

Bowman retired at the end of the 2007 season, ending a 13-year career with the Cowboys. [cite news|publisher="Fox Sports news (Australia)"|title=Bowman flags retirement plans |url=http://www.foxsports.com.au/story/0,,21845916-23214,00.html |accessdate=2007-11-16|date=] Bowman played his last regular season game on 31 August against the Bulldogs in Townsville.

In 2007, the Cowboys announced that the "Cowboy of the Year" award would be renamed the "Paul Bowman Award".fact|date=November 2007