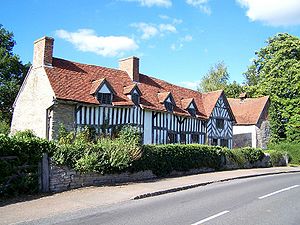 Mary Shakespeare, née Mary Arden, (c. 1537–1608) was the mother of William Shakespeare. She was the daughter of Robert Arden and his first wife Mary Arden née Mary Webb (second daughter of Sir John Alexander Webb). The Arden family had been prominent in Warwickshire since before the Norman Conquest. She was the youngest of eight daughters, and she inherited her father's farm, now called Mary Arden's House, in Wilmcote, Warwickshire when he died in December 1556.

Mary was from a family of status and her ancestors had connections in society, such as Thomas Arden, who fought in the thirteenth century civil war for the Barons and Simon de Montfort; Robert Arden who fought in the War of Roses; John Arden who served on the court of King Henry VII. Upon her Father's death, Mary inherited land in Snitterfield and Wilmcote.[6] 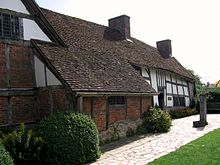 Mary Arden's House in Wilmcote has been maintained in good condition because it had been a working farmhouse over the centuries. It was bought by the Shakespeare Birthplace Trust in 1930 and refurnished in the Tudor style.[7] In 2000 it was discovered that the building preserved as Mary Arden's house had belonged to a friend and neighbour Adam Palmer and the house was renamed Palmer's Farm. The house that had belonged to the Arden family which was near to Palmer's Farm had been acquired by the Shakespeare Birthplace Trust in 1968 for preservation as part of a farmyard without knowing its true provenance.[8] The house and farm are open as historic museum displaying 16th century life.