Cortisol
Not to be confused with cortisone, a similar compound with a similar name, genesis, and function.

Cortisol (hydrocortisone) is a steroid hormone, or glucocorticoid, produced by the adrenal gland.[1] It is released in response to stress and a low level of blood glucocorticoids. Its primary functions are to increase blood sugar through gluconeogenesis; suppress the immune system; and aid in fat, protein and carbohydrate metabolism.[2] It also decreases bone formation. During pregnancy, increased production of cortisol between weeks 30-32 initiates production of fetal lung surfactant to promote maturation of the lungs. Various synthetic forms of cortisol are used to treat a variety of diseases.

Cortisol is produced by the adrenal gland in the zona fasciculata, the second of three layers comprising the outer adrenal cortex. This release is controlled by the hypothalamus, a part of the brain. The secretion of corticotropin-releasing hormone (CRH) by the hypothalamus triggers anterior pituitary secretion of adrenocorticotropic hormone (ACTH). ACTH is carried by the blood to the adrenal cortex, where it triggers glucocorticoid secretion.

Main functions in the body

It suppresses the immune system by "muting" the white blood cells

Another function is to decrease bone formation. Cortisol is used to treat diseases such as Addison’s disease, inflammatory and rheumatoid diseases, and allergies. Low-potency hydrocortisone, available over the counter in some countries, is used to treat skin problems such as rashes, eczema and others.

Cortisol prevents the release of substances in the body that cause inflammation. It stimulates gluconeogenesis (the breakdown of protein and fat to provide metabolites that can be converted to glucose in the liver) and it activates anti-stress and anti-inflammatory pathways.[3]

The amount of cortisol present in the blood undergoes diurnal variation; the level peaks in the early morning (approximately 8 am) and reaches its lowest level at about midnight-4 am, or three to five hours after the onset of sleep. Information about the light/dark cycle is transmitted from the retina to the paired suprachiasmatic nuclei in the hypothalamus. This pattern is not present at birth; estimates of when it begins vary from two weeks to nine months of age.[4]

There is also significant individual variation, although a given person tends to have consistent rhythms.

Cortisol is released in response to stress, acting to restore homeostasis. However, prolonged cortisol secretion (which may be due to chronic stress or the excessive secretion seen in Cushing's syndrome) results in significant physiological changes.[12]

Cortisol counteracts insulin, contributes to hyperglycemia-causing hepatic gluconeogenesis[13] and inhibits the peripheral utilization of glucose (insulin resistance) [13] by decreasing the translocation of glucose transporters (especially GLUT4) to the cell membrane.[14][15] However, cortisol increases glycogen synthesis (glycogenesis) in the liver.[16] The permissive effect of cortisol on insulin action in liver glycogenesis is observed in hepatocyte culture in the laboratory, although the mechanism for this is unknown.

In laboratory rats, cortisol-induced collagen loss in the skin is ten times greater than in any other tissue.[17][18] Cortisol (as opticortinol) may inversely inhibit IgA precursor cells in the intestines of calves.[19] Cortisol also inhibits IgA in serum, as it does IgM; however, it is not shown to inhibit IgE.[20]

Cortisol stimulates gastric-acid secretion.[21] Cortisol's only direct effect on the hydrogen ion excretion of the kidneys is to stimulate the excretion of ammonium ions by deactivating the renal glutaminase enzyme.[22] Net chloride secretion in the intestines is inversely decreased by cortisol in vitro (methylprednisolone).[23][disambiguation needed

Cortisol inhibits sodium loss through the small intestine of mammals.[24] Sodium depletion, however, does not affect cortisol levels[25] so cortisol cannot be used to regulate serum sodium. Cortisol's original purpose may have been sodium transport. This hypothesis is supported by the fact that freshwater fish utilize cortisol to stimulate sodium inward, while saltwater fish have a cortisol-based system for expelling excess sodium.[26]

A sodium load augments the intense potassium excretion by cortisol; corticosterone is comparable to cortisol in this case.[27] In order for potassium to move out of the cell, cortisol moves an equal number of sodium ions into the cell.[28] This should make pH regulation much easier (unlike the normal potassium-deficiency situation, in which two sodium ions move in for each three potassium ions that move out—closer to the deoxycorticosterone effect). Nevertheless, cortisol consistently causes serum alkalosis; in a deficiency, serum pH does not change. The purpose of this may be to reduce serum pH to an optimum value for some immune enzymes during infection, when cortisol declines. Potassium is also blocked from loss in the kidneys by a decline in cortisol (9 alpha fluorohydrocortisone).[29]

Cortisol acts as a diuretic hormone, controlling one-half of intestinal diuresis;[24] it has also been shown to control kidney diuresis in dogs. The decline in water excretion following a decline in cortisol (dexamethasone) in dogs is probably due to inverse stimulation of antidiuretic hormone (ADH or arginine vasopressin), which is not overridden by water loading.[30] Humans and other animals also use this mechanism.[31]

Cortisol stimulates many copper enzymes (often to 50% of their total potential), probably to increase copper availability for immune purposes.[32] This includes lysyl oxidase, an enzyme which is used to cross-link collagen and elastin.[33] Especially valuable for immune response is cortisol's stimulation of the superoxide dismutase,[34] since this copper enzyme is almost certainly used by the body to permit superoxides to poison bacteria. Cortisol causes an inverse four- or fivefold decrease of metallothionein (a copper storage protein) in mice;[35] however, rodents do not synthesize cortisol themselves. This may be to furnish more copper for ceruloplasmin synthesis or to release free copper. Cortisol has an opposite effect on aminoisobuteric acid than on the other amino acids.[36] If alpha-aminoisobuteric acid is used to transport copper through the cell wall, this anomaly might be explained.

Cortisol can weaken the activity of the immune system. Cortisol prevents proliferation of T-cells by rendering the interleukin-2 producer T-cells unresponsive to interleukin-1 (IL-1), and unable to produce the T-cell growth factor.[37] Cortisol also has a negative-feedback effect on interleukin-1.[38] IL-1 must be especially useful in combating some diseases; however, endotoxic bacteria have gained an advantage by forcing the hypothalamus to increase cortisol levels (forcing the secretion of CRH hormone, thus antagonizing IL-1). The suppressor cells are not affected by glucosteroid response-modifying factor (GRMF),[39] so the effective setpoint for the immune cells may be even higher than the setpoint for physiological processes (reflecting leukocyte redistribution to lymph nodes, bone marrow, and skin). Rapid administration of corticosterone (the endogenous Type I and Type II receptor agonist) or RU28362 (a specific Type II receptor agonist) to adrenalectomized animals induced changes in leukocyte distribution. Natural killer cells are not affected by cortisol.[40]

Cortisol reduces bone formation, favoring long-term development of osteoporosis. It transports potassium out of cells in exchange for an equal number of sodium ions (see above).[41] This can trigger the hyperkalemia of metabolic shock from surgery. Cortisol also reduces calcium absorption in the intestine.[42]

Cortisol works with epinephrine (adrenaline) to create memories of short-term emotional events; this is the proposed mechanism for storage of flash bulb memories, and may originate as a means to remember what to avoid in the future. However, long-term exposure to cortisol damages cells in the hippocampus;[43] this damage results in impaired learning. Furthermore, it has been shown that cortisol inhibits memory retrieval of already stored information.[44][45]

Most serum cortisol (all but about 4%) is bound to proteins, including corticosteroid binding globulin (CBG) and serum albumin. Free cortisol passes easily through cellular membranes, where they bind intracellular cortisol receptors.[48]

The primary control of cortisol is the pituitary gland peptide, adrenocorticotropic hormone (ACTH). ACTH probably controls cortisol by controlling the movement of calcium into the cortisol-secreting target cells.[49] ACTH is in turn controlled by the hypothalamic peptide corticotropin releasing hormone (CRH), which is under nervous control. CRH acts synergistically with arginine vasopressin, angiotensin II, and epinephrine.[50] When activated macrophages start to secrete interleukin-1 (IL-1), which synergistically with CRH increases ACTH,[38] T-cells also secrete glucosteroid response modifying factor (GRMF or GAF) as well as IL-1; both increase the amount of cortisol required to inhibit almost all the immune cells.[39] Immune cells then assume their own regulation, but at a higher cortisol setpoint. The increase in cortisol in diarrheic calves is minimal over healthy calves, however, and falls over time.[51] The cells do not lose all their fight-or-flight override because of interleukin-1's synergism with CRH. Cortisol even has a negative feedback effect on interleukin-1[38]—especially useful for those diseases which gain an advantage by forcing the hypothalamus to secrete too much CRH, such as those caused by endotoxic bacteria. The suppressor immune cells are not affected by GRMF,[39] so the immune cells' effective setpoint may be even higher than the setpoint for physiological processes. GRMF (known as GAF in this reference) primarily affects the liver (rather than the kidneys) for some physiological processes.[52]

High potassium media (which stimulates aldosterone secretion in vitro) also stimulate cortisol secretion from the fasciculata zone of canine adrenals [53]—unlike corticosterone, upon which potassium has no effect.[54] Potassium loading also increases ACTH and cortisol in humans.[55] This is probably the reason why potassium deficiency causes cortisol to decline (as mentioned) and causes a decrease in conversion of 11-deoxycortisol to cortisol.[56] This may also have a role in rheumatoid-arthritis pain; cell potassium is always low in RA.[57]

The relationship between cortisol and ACTH, and some consequent conditions, are as follows:

Hydrocortisone is the pharmaceutical term for cortisol used in oral administration, intravenous injection or topical application. It is used as an immunosuppressive drug, given by injection in the treatment of severe allergic reactions such as anaphylaxis and angioedema, in place of prednisolone in patients who need steroid treatment but cannot take oral medication, and perioperatively in patients on longterm steroid treatment to prevent Addisonian crisis. It may be used topically for allergic rashes, eczema, psoriasis and certain other inflammatory skin conditions. It may also be injected into inflamed joints resulting from diseases such as gout.

Hydrocortisone creams and ointments are available in most countries without prescription in strengths ranging from 0.05% to 2.5% (depending on local regulations) with stronger forms available by prescription only. Covering the skin after application increases the absorption and effect. Such enhancement is sometimes prescribed, but otherwise should be avoided to prevent overdose and systemic impact.

Advertising for the dietary supplement CortiSlim originally (and falsely) claimed that it contributed to weight loss by blocking cortisol. The manufacturer was fined $12 million by the Federal Trade Commission in 2007 for false advertising, and no longer claims in their marketing that CortiSlim is a cortisol antagonist.[91] 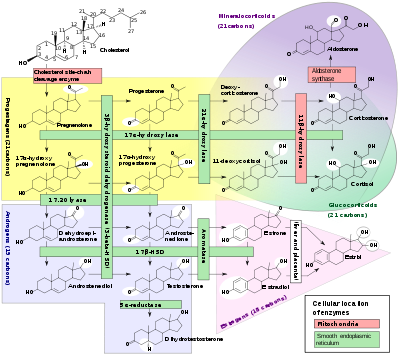 The synthesis of cortisol in the adrenal gland is stimulated by the anterior lobe of the pituitary gland with adrenocorticotropic hormone (ACTH); ACTH production is in turn stimulated by corticotropin-releasing hormone (CRH), which is released by the hypothalamus. ACTH increases the concentration of cholesterol in the inner mitochondrial membrane, via regulation of the STAR (steroidogenic acute regulatory) protein. It also stimulates the main rate-limiting step in cortisol synthesis, in which cholesterol is converted to pregnenolone and catalyzed by Cytochrome P450SCC (side chain cleavage enzyme).[92]

An alteration in 11-beta HSD1 has been suggested to play a role in the pathogenesis of obesity, hypertension, and insulin resistance known as metabolic syndrome.[93]

An alteration in 11-beta HSD2 has been implicated in essential hypertension and is known to lead to the syndrome of apparent mineralocorticoid excess (SAME).[citation needed]