The genus Cordylus (Sauria: Cordylidae) includes a wide variety of small to medium sized spiny lizards from Africa, collectively called girdle-tailed or girdled lizards. All are diurnal and ovoviviparous (live-bearing, with eggs). Most species are rupicolous (rock-dwelling) while a few species are arboreal or live in burrows. They defend themselves with osteoderms (flat bony plates in the skin) and by quickly retreating into rock crevices or burrows. Many species live in groups and males defend territories.

Cordylids are generally listed under CITES Appendix II. They are not necessarily threatened with extinction, but trade is controlled to prevent over-exploitation. Some species of Cordylus have limited ranges and may be threatened with habitat destruction or over collecting for the pet trade.

Classification of the genus Cordylus

Broadley (2006) recognized 47 species in the genus Cordylus, including 8 species originally placed in the genus Pseudocordylus ( P. fasciatus, P. langi, P. melanotus, P. microlepidotus, P. nebulosus, P. spinosus, P. subvirdis, and P. transvaalensis) and Hemicordylus capensis. The greatest diversity of cordylids is in South Africa, with a few species found in Angola and eastern Africa as far north as Ethiopia. Other members of the Cordylidae are Chamaesaura (a group of legless lizards from southern and eastern Africa) and Platysaurus. The sister group of Cordylidae is the plated lizards, Gerrhosauridae. 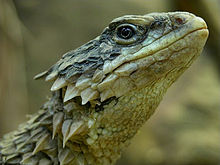 The smaller species can be kept in a 10 gallon aquarium, but larger species and groups need a 40 gallon aquarium or larger. Given enough space, similar-sized species can be kept together, although they should be observed for interspecies aggression. Two males of the same species should not be introduced together. Occasionally two females of the same species will not get along and must be separated.

The substrate can be sand, coconut fiber, or newspaper. There should be plenty of hiding places, at least one per lizard. Rocks can be stacked into miniature cliffs or rock piles. Make sure that stacked rocks cannot fall onto captives. Provide a water bowl that is large enough for the lizard to soak when shedding its skin. A heat lamp that provides UVA and UVB for basking should be placed at one side of the enclosure. The cool end of the cage should be around 70-75o, and the area around the heat lamp should reach 90-100o. At night the cage can drop to 60-70o. Some species are found in mountainous areas where the temperature can drop below freezing.

All species are insectivorous, however some will take small quantities of fruits or vegetables, and large specimens will eat the occasional pinky or fuzzy mouse. Variety is important, try to offer different kinds of insects. Insects should not be collected from areas that have been treated for herbicides or pesticides.

Cordylus rarely reproduce in captivity, produce a small number of young (1-6), and they are slow growing, taking 2 or more years to mature. Some species, including the Sungazer (Cordylus giganteus) and the Armadillo lizard (Cordylus cataphractus) reproduce every other year or produce one baby at a time. Cordylus can live over 25 years in captivity.

The Tropical Girdled Lizard (Cordylus tropidosternum, a.k.a the Armadillo Lizard) is the most commonly available species in the pet trade. Individuals are skittish at first but most do not bite when initially captured. They will eventually become tame and will take food by hand. Other species of Cordylus may or may not become docile. Smaller species will remain skittish and large Cordylids can produce a painful, but harmless bite.

More information about caring for C. tropidosternum and other Cordylus can be found at: 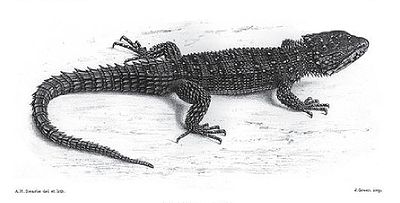