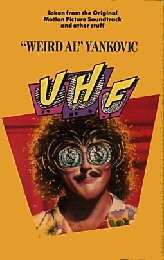 The promo single only contains "UHF".

The promo single only contains "UHF".

The "UHF" music video is a pastiche of several other music videos. The videos parodied in the "UHF" video are:
* "" by Guns N' Roses (1) and (17):*Yankovic and his band are dressed like Guns N' Roses as they perform on a stage similar to the one in the original video.
* "Faith" by George Michael (2):* Yankovic is dressed similarly to Michael in the original, even sporting a five o'clock shadow. The back of the jacket Michael wears in the original read "Revenge," while the one Yankovic wears in "UHF" reads "Look at my butt".
* "Addicted to Love" by Robert Palmer (3) and (20):* The women have glasses and mustaches similar to those of Yankovic.
* "" by Prince. (4) and (9):*Yankovic is dressed similar to Prince and is performing on a stage similar to the one in the original video. He exaggerates usage of his tongue, and flails around with a guitar.
* "Once in a Lifetime" by Talking Heads (5):*Yankovic is shown dressed like David Byrne and makes sudden flings of his arm. In the background, we see several Yankovics dancing in perfect synchronization; in the foreground, a large Al is getting further and further out of sync.
* "Sledgehammer" by Peter Gabriel (6) and (13):*Both pixilation and stop-motion animation are used. Later, Yankovic sings next to two bumper cars, as in the original video.
* "Legs" by ZZ Top (7) and (18):*Yankovic and two members of his band appear as ZZ Top in front of a supermarket. The two guitarists spin their guitars around; the complete revolution launches into the next scene. Later, the three appear without instruments and wave at the camera.
* "White Wedding" by Billy Idol (8):*Yankovic unwraps a white towel from around himself doing Idol's pattened raised upper lip. The towel gets caught slightly and Yankovic ends up tossing it down rather roughly.
* "" by , from the film "Magical Mystery Tour" (10) and (19):*Yankovic and the members of his band descend a grand staircase in white tuxedos.
* "Mediate" by INXS, which itself is an homage to Bob Dylan's "". (11) :* Similar to Yankovic's later video "Bob", the placards that Yankovic tosses read as follows: "Sit", "Stare", "Picture", "Tube", "Brain", "Cottage cheese", and a question mark.
* "" by Randy Newman (12):*Al is seen driving down the street in an old convertible with a red-haired woman.
* "" by Prince (14):*Yankovic is shown in a bathtub. His hairstyle is similar to that of Prince, and he is shown without glasses.
* "Rebel Yell" by Billy Idol (15):*Al repeatedly throws punches at the camera. His last punch breaks the lens.
* "" by Talking Heads, as performed in the concert film "" (16):*Al is dressed in an oversized white suit, and flails his arms around (waving the sleeves). (Yankovic dons a similar attire for concert performances of "Dog Eat Dog," a Talking Heads style parody.)