Coventry Sphinx Football Club is a football club based in Coventry, West Midlands, England. They were established in 1946. In the 2006–07 season they were champions of the Midland Combination Premier Division, earning promotion to the Midland Football Alliance.

Coventry Sphinx FC were formed as a works team, Armstrong Siddeley Motors FC, from the Sphinx badge used on cars manufactured by that company, in 1946, playing in works leagues. Later they moved to a new ground in the Lower Stoke area of Coventry and changed their name to Sphinx FC.

Sphinx played in the Coventry Alliance with great success before joining the Midland Combination in 1993, where they were promoted in their very first season to Division 1, and also reached the Semi-Finals of the Birmingham Saturday Vase. In 1994–95 they were promoted again after a second place finish. To coincide with their arrival in the top flight, the club's name was changed to Coventry Sphinx and the ground re-named Sphinx Drive.

In their first season in the top flight, Sphinx finished as runners up to Bloxwich Town after which Willie Knibbs took over as manager. Knibbs took Sphinx to the Endsleigh Challenge Cup Final in May 1999 where Sphinx lost out to Alveston in a match played at Villa Park. Knibbs reigned as manager for three and a half seasons before leaving for Racing Club Warwick but returned in 2001. Shortly after this, however, he was killed in a car accident returning from a cup game at Meir KA. The small covered stand at the ground (part seated, part standing) is named after him.

Richard Wade and Martin Ascroft took over as joint managers for the 2002–03 season and steered the team to a 7th place finish. Steve Masters replaced Wade in the summer of 2003 but quit after six months due to family and work commitments. Martin Ascroft continued as manager to achieve a 4th place finish. In the last two seasons under the guidance of then manager Paul Charnley, Sphinx have improved their standing even further with two consecutive 2nd place finishes. In the 2006–07 season, Sphinx won the league, achieving promotion to the Midland Football Alliance. In the 2007–08 season the team have reached the quarter finals of the FA Vase drawing 3–3 away to Kirkham & Wesham.

Reserve Team Manager Danny McSheffrey was appointed Manager for the 2009–2010.

On August 6, 2008 Sphinx declared that they had forged a link with Football League Championship team Coventry City, now that they are Coventry's highest ranked non-league team. This link was to help ensure both clubs got to the top of their respective levels.[1] 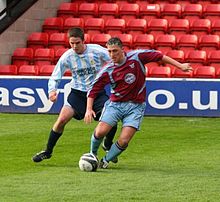 Sphinx (light blue and white) in action against Westfields