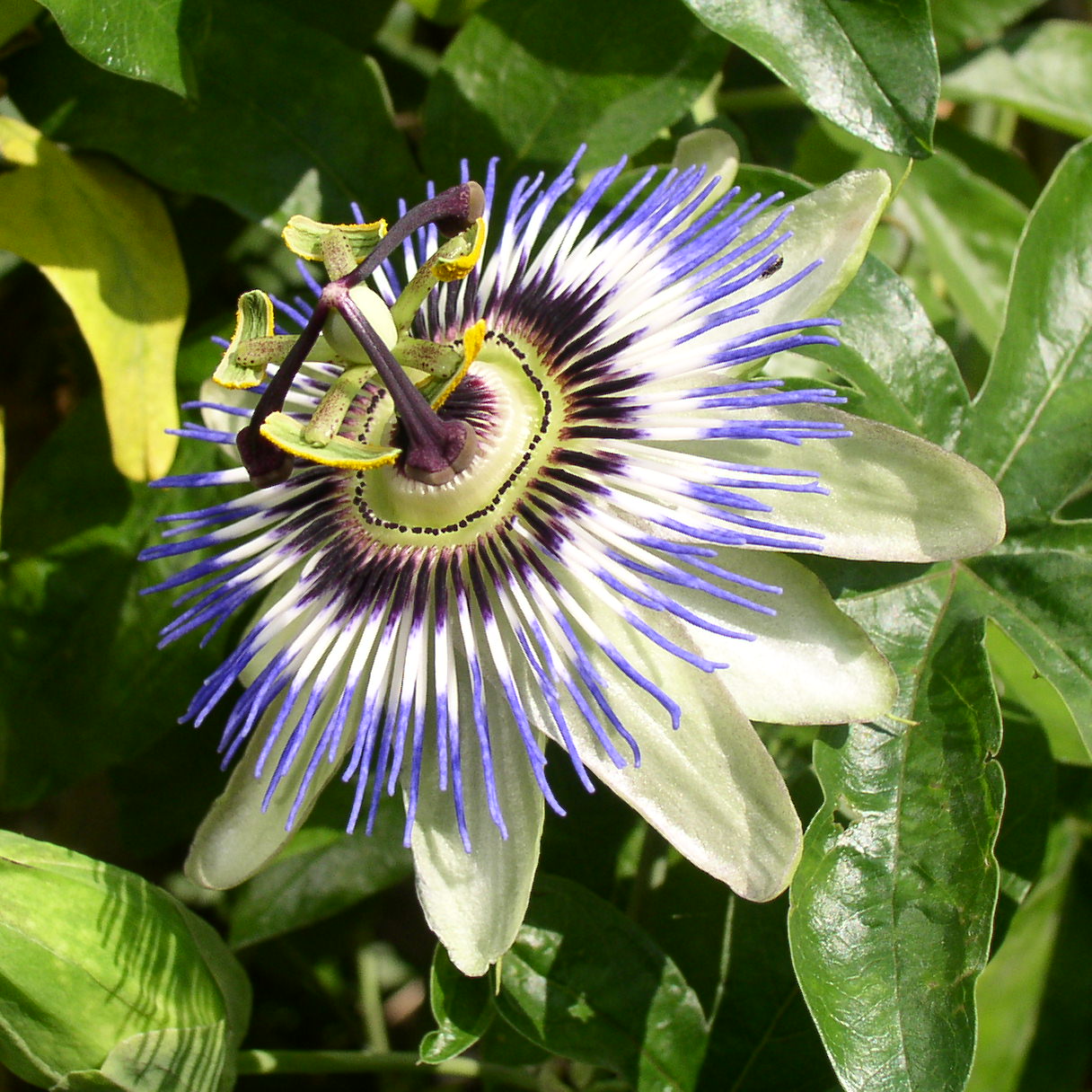 Passion flower ("Passiflora"; syn. "Disemma" ) is a of about 500 of s in the family . They are mostly s, with some being s, and a few species being . For information about the fruit of the passiflora plant, see .

Most decorative passifloras have a unique structure, which requires a large to effectively pollinate (see photos below). In the American tropics, wooden beams are mounted very near plantings to encourage s to nest. At the same time, the size and structure of flowers of different species of passiflora vary. Some species can be pollinated by s and s, others by s, and others by bats, while others are self-pollinating. "Passiflora" species are used as food plants by the of the , "" and many (longwing ). Notable among the latter are like the Melpomene, Sara, and Rosina longwings.

The bracts of "" are covered by hairs which exude a sticky fluid. Many insects get stuck to this. Studies have suggested that this may be an adaptation similar to that seen in s. (Radhamani, et al)

The family Passifloraceae is found world wide, excluding and .Nine species of "Passiflora" are native to the , found from to the north, west to and south to the . Species of the genus are found in most of as well as and Southern (with 17 species), , (with four, possibly more species) and (with a single endemic species).

has many members of the family Passifloraceae, (the rather more primitive "") but no "Passiflora".

Species of "Passiflora" have been naturalised beyond their native ranges. For example "Passiflora caerulea" now grows wild in Spain [ [http://www.ual.es/personal/edana/alienplants/checklist.pdf Plant Invaders in Spain] ] .

The fruited "" and the yellow fruited "Passiflora edulis" var. "flavicarpa" are widely grown in subtropical and tropical regions respectively, for their delicious fruits.

These forms of "" have been found to be different species. They occur in different climate regions in nature and bloom at different times of day. The purple fruited species is self fertile and the yellow fruited species, despite claims to the contrary, is self sterile. It requires two clones for pollenization.

During Victorian times the flower (which in all but a few species lasts only one day) was very popular and many hybrids were created using "P. caerulea" and "P. alata" and other tropical species.

Hundreds of hybrids have been named and hybridizing is currently being done extensively for flowers, foliage and fruit.A number of species of "Passiflora" are cultivated outside their natural range (where some have become established) because of their beautiful flowers. The passion fruit or maracujá vine of commerce, "Passiflora edulis", is cultivated extensively in the and south and for its fruit, which is used as a source of juice.

Maypop (""), a common species in the southeastern US. This is a subtropical representative of this mostly tropical family. However, unlike the more tropical cousins, this particular species is hardy enough to withstand the cold down to -4°F (-20° C) before its roots die (it is native as far north as and has been cultivated as far north as and .) The fruit is sweet, yellowish, and roughly the size of a chicken's egg; it enjoys some popularity as a native plant with few pests and edible fruit. As with other passifloras, it is the larval food of a number of butterfly species and is important to local wildlife. Carpenter bees figure as important pollinators of maypops.

Banana poka or Curuba (""), originally from Central , is an invasive , especially on the islands of , where it is spread by s eating the fruits. It overgrows and smothers stands of endemic vegetation, mainly on roadsides. Its fruits are edible, but not as much sought-after as .

Chilean passiflora, ("") grows in the , from to , between 2500 and 3800 meters altitude, and in Coastal Central Chile, in where is an vine from humid woody Chilean Mediterranean forests.

Many cool growing "Passiflora" from the Andes Mountains can be grown successfully for their beautiful flowers and fruit in cooler Mediterranean climates, such as the and in and along the Western Coast of the U.S. into .

Most species have elongated fruit from two to eight inches long and an inch to two inches across depending upon the species or cultivar. "P. pinnatistipula" has a round fruit unusual in the "Tacsonia" group, which is typified by "P. tarminiana" and "P. mixta" with their elongated tubes and brightly red to rose colored petals.

"Passiflora incarnata" leaves and roots have a long history of use among Native Americans in . "Passiflora edulis" and a few other species are used in Central and South America. The fresh or dried leaves are used to make an infusion, a tea that is used to treat , , and , and is also valued for its painkilling properties. [http://www.umm.edu/altmed/ConsHerbs/Passionflowerch.html] It has been found to contain s which are MAOIs with properties. The flower has only traces of these chemicals, but the leaves and the roots of some species contain more and have been used to enhance the effects of mind-altering drugs. Once dried, the leaves can also be smoked.

Passion flower also may be effective for anxiety disorder, but further studies are needed. [http://www.ncbi.nlm.nih.gov/entrez/query.fcgi?cmd=Retrieve&db=PubMed&list_uids=11679026&dopt=Abstract]

"Passion" does not refer to love, but to the Christian theological icon of the passion of Christ on the cross. In the 15th and 16th centuries, Spanish Christian missionaries discovered this flower and adopted its unique physical structures, particularly the numbers of its various parts, as symbols of the last days of and especially the . For example: the radial filaments which can number more than a hundred and vary from flower to flower were taken to represent the Crown of Thorns. The ten petals and sepals can represent the ten faithful . The top 3 stigmata can represent the 3 nails and the lower 5 anthers the 5 wounds. The flower has been given names related to this symbolism throughout Europe since that time. In , it is known as "Espina de Cristo" (Christ's Thorn). In it was once known as "Muttergottes-Schuzchen" (Mother-of-God's Star). Popular culture being what it is, however, passionflowers and especially are frequently used with sexual or romantic , giving rise to such uses as a one-time soft drink named Purple Passion.

In they are referred to as "clock-flower" (שעונית). In , they are known as nihongo|"clock plant"|時計草|tokeisō. In North America they are also called the Maypop, the water lemon, and the wild apricot (after its fruit). Native Americans in the area called it "ocoee", and the and valley are named after it. In Hawaiian, they are called lillikoi.