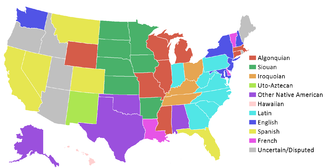 Twenty-two other state names derive from European languages: seven come from Latin (mostly from Latinate forms of English personal names), five come from Spanish (and one more from an Indigenous language by way of Spanish), four come from English, and four come from French (one of those by way of English). The etymologies of six states are disputed or unclear: Arizona, Hawaii, Idaho, Maine, Oregon, and Rhode Island (in the table below, those states have one row for each potential source language or meaning).