Telecommunications device for the deaf

Telecommunications device for the deaf 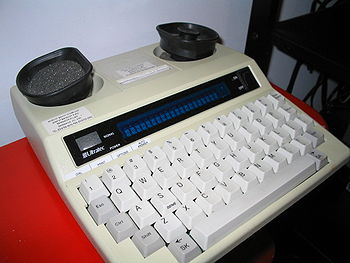 Miniprint 425 TDD. The acoustic coupler on the top is for use with telephone handsets. The printer records the conversation. The specific GA and SK keys allow for speedier use of common abbreviations.

A telecommunications device for the deaf (TDD) is a teleprinter, an electronic device for text communication over a telephone line, that is designed for use by persons with hearing or speech difficulties. Other names for the device include teletypewriter, TTY, textphone (common in Europe), and minicom (United Kingdom).

The typical TTD is a device about the size of a typewriter or laptop computer with a QWERTY keyboard and small screen that uses LEDs or an LCD screen to display typed text electronically. In addition, TTDs commonly have a small spool of paper on which text is also printed — old versions of the device had only a printer and no screen. The text is transmitted live, via a telephone line, to a compatible device, i.e. one that uses a similar communication protocol.

Special telephone services have been developed to carry the TTD functionality even further. In certain countries there are systems in place so that a deaf person can communicate with a hearing person on an ordinary voice phone using a human relay operator. There are also "carry-over" services, enabling people who can hear but cannot speak ("hearing carry-over," a.k.a. "HCO"), or people who cannot hear but are able to speak ("voice carry-over," a.k.a. "VCO") to use the telephone.

The TTD concept was developed by James C. Marsters (1924–2009), a dentist and private airplane pilot who became deaf as an infant because of scarlet fever, and Robert Weitbrecht, a deaf physicist. In 1964, Marsters, Weitbrecht and Andrew Saks, an electrical engineer and grandson of the founder of the Saks Fifth Avenue department store chain, founded APCOM (Applied Communications Corp.), located in the San Francisco Bay area, to develop the acoustic coupler, or modem; their first product was named the PhoneType.[1][2][3] APCOM collected old teleprinter machines from the Department of Defense and junkyards. Acoustic couplers were cabled to TTYs enabling the Bell Telephone Company standard Model 500 telephone to couple, or fit, into the rubber cups on the coupler, thus allowing the device to transmit and receive a unique set of tones generated by the different corresponding TTY keys. The entire configuration of teleprinter machine, acoustic coupler, and telephone set became known as the TTY. Weitbrecht invented the acoustic coupler modem in 1964. The actual mechanism for TTY communications was accomplished electromechanically through frequency shift keying (FSK) allowing only one-way (simplex) communication.

During the late 1960s, Paul Taylor combined Western Union Teletype machines with modems to create teletypewriters, known as TTYs. He distributed these early, non-portable devices to the homes of many in the Deaf community in St. Louis, Missouri. He worked with others to establish a local telephone wake-up service. In the early 1970s, these small successes in St. Louis evolved into the nation’s first local telephone relay system for the deaf.[4]

In 1973 the MCM (Manual Communications Module), which was the world's first electronic portable TTY allowing two-way telecommunications, premiered at the California Association of the Deaf convention in Sacramento, California. The battery-powered MCM was invented and designed by Michael Cannon in conjunction with physicist Art Ogawa and Deaf interpreter Kit Patrick Corson. It was manufactured by Michael Cannon's company, Micon Industries, and initially marketed by Kit Corson's company, Silent Communications. In order to be compatible with the existing TTY network, the MCM was designed around the five-bit Baudot code established by the older TTY machines instead of the ASCII code used by computers. The MCM was an instant success with the Deaf community despite the drawback of a $599 cost. Within six months there were more MCMs in use by the Deaf and Hard of Hearing than TTY machines. After a year Micon took over the marketing of the MCM and subsequently concluded a deal with Pacific Bell (who coined the term "TDD") to purchase MCMs and rent them to Deaf telephone subscribers for $30 per month.

After Micon formed an alliance with APCOM, Michael Cannon (Mincon), Paul Conover (Micon), and Andrea Saks (APCOM) successfully petitioned the California Public Utilities Commission (CPUC) resulting in a tariff that paid for TTY devices to be distributed free of cost to Deaf persons. Micon produced over 1,000 MCMs per month resulting in approximately 50,000 MCMs being disseminated into the Deaf community. Before he left Micon in 1980, Michael Cannon developed several computer compatible variations of the MCM and a portable, battery operated printing TTY, but they were never as popular as the original MCM. Newer model TTYs could communicate with selectable codes that allow communications at a higher bit rate on those models similarly equipped. However, the lack of true computer interface functionality spelled the demise of the original TTY and its clones. During the mid-1970s other so-called portable telephone devices were being cloned by other companies, and this was the time period when the term "TDD" began being used largely by those outside the Deaf community.

In 2009, AT&T received the James C. Marsters Promotion Award from TDI, (formerly Telecommunications for the Deaf, Inc.) for its efforts to increase accessibility to communication for people with disabilities.[5] The award holds some irony; it was AT&T that, in the 1960s, resisted efforts to implement TTY technology, claiming it would damage its communication equipment. In 1968, The Federal Communications Commission struck down AT&T's policy and forced it to offer TTY access to its network.[1][3]

There are many different textphone standards.

The original standard used by TTYs is the Baudot code implemented asynchronously at either 45.5 or 50 baud, 1 start bit, 5 data bits, and 1.5 stop bits. Baudot is a common protocol in the US.

In addition to regular Baudot, the UltraTec company implements another protocol known as Enhanced TTY, which it calls "Turbo Code," in its products. Turbo Code has some advantages over Baudot protocols, such as a higher data rate, full ASCII compliance, and full-duplex capability. However, Turbo Code is proprietary, and UltraTec only gives its specifications to parties who are willing to license it.

The ITU V series recommendations are a collection of early modem standards approved by the ITU in 1988.

In 1994 the ITU approved the V.18 standard[3]. V.18 is a dual standard. It is both an umbrella protocol that allows recognition and interoperability of some of the most commonly used textphone protocols, as well as offering a native V.18 mode, which is an ASCII full- or half-duplex modulation method.

In the UK, a virtual V.18 network, called TextDirect, exists as part of the Public Switched Telephone Network, thereby offering interoperability between textphones using different protocols. The platform also offers additional functionality like call progress and status information in text and automatic invocation of a relay service for speech-to-text calls.

As TDD's are increasingly considered legacy devices, with the emergence of modern technologies such as email, texting and instant messaging, text from TDD are increasingly being sent over Text over IP gateways, or other real-time text protocols.

Other devices for hearing impaired

In addition to TDD, there are a number of pieces of additional equipment that can be coupled to telephones to improve their utility. For those with hearing difficulties the telephone ring and conversation sound level can be amplified or pitch adjusted, ambient noise can also be filtered. The amplifier can be a simple addition or through an inductive coupler to interact with suitable hearing aids. The ring can also be supplemented with extension bells or a visual call indicator.

There are some etiquette rules that users of TTYs must be aware of. Because of the inability to detect when a person has finished speaking, the term "Go Ahead" (GA) is used to denote the end of a thought.

Caller A: HELLO JOHN, WHAT TIME WILL YOU BE COMING AROUND TODAY Q GA
Caller B: HI FRED, I WILL BE AROUND NOON GA
Caller A: OK, NO PROBLEM, DON'T FORGET TO BRING THE BOOKS AND THE WORK SO FAR GA
Caller B: WILL DO SK
Caller A: BYE BYE SKSK

SK is used to allow the users to say their farewells, while SKSK indicates an immediate call hang-up.

Caller A HI, THIS IS JOHN, CAN I ASK WHO IS CALLING? GA
Caller B HI JOHN, ITS ME FRED, I AM WONDERING WHERE YOU ARE, ITS GETTING LATE TO GO OUT TO THE PUB GA
Caller A HI FRED, SORRY I DONT THINK I CAN GO GA
Caller B WHY CANT YOU GO? GA
Caller A MY WIFE IS NOT FEELING WELL AND I HAVE NO BABYSITTER FOR MY KIDS! GA
Caller B AWWWW DARN. I WANTED YOU THERE. OH WELL WHAT CAN YOU DO ? GA
Caller A I KNOW.. I GOTTA GO. THE KIDS NEED ME. SEE YOU AROUND! BYE FOR NOW SK
Caller B OK NO WORRIES SEE YOU SOON! BYE BYE SK GA
Caller A SKSK (THE PARTY HAS HUNG UP)

Note: TTYs use only capital letters.
Note: Text relay service used to be called typetalk (RNID) but have merged with the phone line using the dialling prefix 18001 (TTY) or the 18002 (voice relay) the emergency line is 18000 (TTY)

One of the most common uses for a TTY is to place calls to a Telecommunications Relay Service (TRS), which makes it possible for the Deaf to successfully make phone calls to regular phone users.

The use of voice recognition systems is in limited use due to technical difficulties. A new development called the captioned telephone now utilizes voice recognition to assist the human operators. Newer text based communication methods, such as short message service (SMS), Internet Relay Chat (IRC), and instant messaging have also been adopted by the Deaf as an alternative or adjunct to TTY.