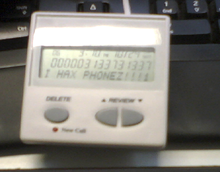 Example of Caller ID spoofed via Orange Boxing, both the name and number are faked to reference "leetspeak".

Caller ID spoofing is the practice of causing the telephone network to display a number on the recipient's Caller ID display that is not that of the actual originating station. The term is commonly used to describe situations in which the motivation is considered malicious by the speaker or writer. Just as e-mail spoofing can make it appear that a message came from any e-mail address the sender chooses, Caller ID spoofing can make a call appear to have come from any phone number the caller wishes. Because of the high trust people tend to have in the Caller ID system, spoofing can call the system's value into question.

To use a typical spoofing service, customers pay in advance for a personal identification number (PIN), allowing them to make a call for a certain amount of time. To begin, customers dial the number given to them by the company and enter their PIN. Then they enter the number they wish to call and the number they wish to appear as the Caller ID. Once the customer selects these options, the call is bridged or transferred and the person on the other end receives the customer's call. Assuming Caller ID is used on the receiving end, the receiver would normally assume the call was coming from a different phone number — the spoofed number chosen by the caller — thus tricking the receiver into thinking the call was coming from a different individual or organization than the caller's. Most providers work similarly to a prepaid calling card.

The above method is a bit complex; many Caller ID spoofing service providers also allow customers to initiate spoofed calls from a Web-based interface. Some providers allow entering the name to display along with the spoofed Caller ID number, but in most parts of the United States, for example, whatever name the local phone company has associated with the spoofed Caller ID number is the name that shows up on the Caller ID display. In other words, the name is not derived from the phone network; instead the originating number is looked up in a database, often over the Internet, and that name is used instead.

Using a Web-based spoofing service involves creating an account with a provider, logging in to their Website and completing a form. Most companies require the following basic fields:

Some providers also offer the ability to record calls, change the voice and send text messages.

Other popular methods by companies include displaying only a geographic name on the caller ID readout, e.g., "ARIZONA", "CALIFORNIA", "OREGON", or "ONTARIO".

Caller ID is spoofed through a variety of methods and different technology. The most popular ways of spoofing Caller ID are through the use of VoIP or PRI lines.

Another method of spoofing is that of emulating the Bell 202 FSK signal. This method, informally called orange boxing, uses software that generates the audio signal which is then coupled to the telephone line during the call. The object is to deceive the called party into thinking that there is an incoming call waiting call from the spoofed number, when in fact there is no new incoming call. This technique often also involves an accomplice who may provide a secondary voice to complete the illusion of a call-waiting call. Because the orange box cannot truly spoof incoming caller ID prior to answer and relies to a certain extent on the guile of the caller, it is considered as much a social engineering technique as a technical hack.

Other methods include switch access to the Signaling System 7 network and social engineering telephone company operators, who place calls for you from the desired phone number.

In the past, Caller ID spoofing required an advanced knowledge of telephony equipment that could be quite expensive. However, with open source software (such as Asterisk or FreeSWITCH, and almost any VoIP company), one can spoof calls with minimal costs and effort.

Legislation in the United States

On April 6, 2006, Congressmen Eliot Engel (D-NY) and Joe Barton (R-TX) introduced H.R. 5126, a bill that would have made caller ID spoofing a crime. Dubbed the "Truth in Caller ID Act of 2007", the bill would have outlawed causing "any caller identification service to transmit misleading or inaccurate caller identification information" via "any telecommunications service or IP-enabled voice service." Law enforcement was exempted from the rule. Three weeks later, an identical bill was introduced in the Senate. [1] On June 6, 2006, the House of Representatives passed the Truth in Caller ID Act, although no Senate action was taken on either the House or Senate bill. At the end of the 109th Congress, the bill expired (all pending legislation not voted into law at the end of the House term, a.k.a. end of a session of Congress, is dead).

On January 5, 2007, Congressman Engel introduced H.R. 251, and Senator Bill Nelson (D-FL) introduced a similar bill (S.704) two months later. On June 27, 2007, the United States Senate Committee on Commerce, Science and Transportation approved and submitted to the Senate calendar S.704, a bill that would have made caller ID spoofing a crime. Dubbed the "Truth in Caller ID Act of 2007", the bill would have outlawed causing "any caller identification service to transmit misleading or inaccurate caller identification information" via "any telecommunications service or IP-enabled voice service." Law enforcement was exempted from the rule. Engel's bill passed in the House of Representatives. Nelson's bill was referred to the same Senate committee that approved S.704.[2][3] The Senate again passed neither version of the legislation.[4]

In the 111th Congress, Congressman Engel and Senator Nelson once again introduced similar versions of the Caller ID legislation, H.R. 1258. The bill was reintroduced in the Senate on January 7, 2009, as S.30, the Truth in Caller ID Act of 2009, and referred to the same committee[5] The Senate and the House both passed their respective versions of the legislation, but on December 15, 2010 the House passed S.30 and sent the legislation to the President for a signature. On December 22, 2010, President Obama signed the bill into law. [6]

Under the bill, which also targets VOIP services, it becomes illegal "to cause any caller identification service to knowingly transmit misleading or inaccurate caller identification information with the intent to defraud, cause harm, or wrongfully obtain anything of value...." Forfeiture penalties or criminal fines of up to $10,000 per violation (not to exceed $1,000,000) could be imposed. [7] The bill maintains an exemption for blocking one's own outgoing caller ID information, and law enforcement isn't affected. [8]

Caller ID spoofing has been available for years to people with a specialized digital connection to the telephone company, called an ISDN PRI circuit. Collection agencies, law-enforcement officials, and private investigators have used the practice, with varying degrees of legality.

The first mainstream Caller ID spoofing service, Star38.com, was launched in September 2004. Star38.com was the first service to allow spoofed calls to be placed from a web interface. It stopped offering service in 2005, as a handful of similar sites were launched.

In August 2006, Paris Hilton was accused of using caller ID spoofing to break into a voicemail system that used caller ID for authentication.[9] Caller ID spoofing also has been used in purchase scams on web sites such as Craigslist and eBay. The scamming caller claims to be calling from Canada into the U.S. with a legitimate interest in purchasing advertised items. Often the sellers are asked for personal information such as a copy of a registration title, etc., before the (scamming) purchaser invests the time and effort to come see the for-sale items. In the 2010 election, fake caller IDs of ambulance companies and hospitals were used in Missouri to get potential voters to answer the phone. [10] In 2009, a vindictive Brooklyn wife spoofed the doctor’s office of her husband’s lover in an attempt to trick the other woman into taking medication which would make her miscarry. [11]

Frequently, caller ID spoofing is used for prank calls. For example, someone might call a friend and arrange for "The White House" to appear on the recipient's caller display. In December 2007, a hacker used a Caller ID spoofing service and was arrested for sending a SWAT team to a house of an unsuspecting victim.[12] In February 2008, a Collegeville, Pennsylvania man was arrested for making threatening phone calls to women and having their home numbers appear "on their caller ID to make it look like the call was coming from inside the house."[13][14] Some companies even feature voice changing and call recording features. [15]

In March 2008, several residents in Wilmington, Delaware reported receiving telemarketing calls during the early morning hours, when the caller had apparently spoofed the Caller ID to evoke the 1982 Tommy Tutone song 867-5309/Jenny.[16]

There are legitimate reasons for modifying the caller ID sent with a call.