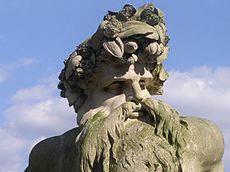 Father Thames, a Coade stone sculpture by John Bacon, in the grounds of Ham House

Lithodipyra (Stone fired twice - Ancient Greek (λίθος/δίς/πυρά)), or Coade stone, was ceramic stoneware that was often described as an artificial stone in the late 18th and early 19th centuries. It was used for moulding Neoclassical statues, architectural decorations and garden ornaments that were both of the highest quality and remain virtually weatherproof today. Produced by appointment to George III and the Prince Regent, it features on St George’s Chapel, Windsor; The Royal Pavillion, Brighton; Carlton House, London; the Royal Naval College, Greenwich, and a large quantity was used in the refurbishment of Buckingham Palace in the 1820s.[1][2]

Lithodipyra was first created around 1770 by Mrs Eleanor Coade who ran Coade's Artificial Stone Manufactory, Coade and Sealy, and Coade in Lambeth, London, from 1769 until her death in 1821.[1] [n 1] [n 2] [n 3] After which Lithodipyra continued to be manufactured by her last business partner William Croggon until 1833.[1] [3]

In 1769 Mrs Coade bought Daniel Pincot’s struggling artificial stone business at Kings Arms Stairs, Narrow Wall, Lambeth, a site now under the Royal Festival Hall.[2][4] This business developed into Coade's Artificial Stone Manufactory with Eleanor in charge, such that within two years (1771) she sacked Pincot for 'representing himself as the chief proprietor'.[2][1][5]

Mrs Coade did not invent 'artificial stone', various inferior quality precursors having been both patented and manufactured over the previous forty (or sixty[3]) years, but she was probably responsible for perfecting both the clay recipe and the firing process. It is possible that Pincot's business was a continuation of that run nearby by Richard Holt, who had taken out two patents in 1722 for a kind of liquid metal or stone and another for making china without the use of clay, but there were many start-up 'artificial stone' businesses in the early 18th century of which only Mrs Coade's succeeded.[6][4][7]

The company did well, and boasted an illustrious list of customers such as George III and members of the English nobility. In 1799 Mrs Coade appointed her cousin John Sealy, already working as a modeller, as a partner in her business, (Her mother’s sister Mary’s son),[7] which then traded as 'Coade and Sealy' until his death in 1813 when it reverted to just 'Coade'.

In 1813 Mrs Coade took on William Croggan from Grampound in Cornwall, a sculptor and distant relative by marriage (second cousin once removed). He managed the factory until her death eight years later in 1821[9] whereby he bought the factory from the executors for ca. £4000. Croggan supplied a lot of Coade stone for Buckingham Palace, however, he went bankrupt in 1833 and died two years later. Trade declined, and production came to an end in the early 1840s. 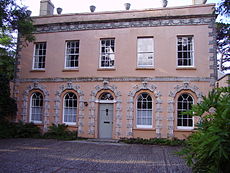 Coade stone is a type of stoneware. Mrs Coade's own name for her products was Lithodipyra, a name constructed from ancient Greek words meaning "stone-twice-fire" (λίθος/δίς/πυρά), or "twice fired stone". Its colours varied from light grey to light yellow (or even beige) and its surface is best described as having a matte finish.

The ease with which the product could be moulded into complex shapes made it ideal for large statues, sculptures and sculptural façades. Moulds were often kept for many years, for repeated use. One-offs were clearly much more expensive to produce, as they had to carry the entire cost of creating the mould.

One of the more striking features of Coade stone is its incredible resistance to weathering, often faring better than most types of stone in London's harsh environment. Examples of Coade stonework have survived very well; prominent examples are listed below, having survived without apparent wear and tear for 150 years.

As a material, Coade stone was replaced by Portland cement as a form of artificial stone and it appears to have been largely phased out by the 1840s.

Although Coade stone's reputation for both weather resistance and manufacturing quality is virtually untarnished, there are three offline sources that describe Rossi's statue of George IV erected in the Royal Crescent, Brighton as unable to withstand the weathering effects of sea-spray and strong wind: such that, by 1807 the fingers on the sculpture's left hand had been destroyed, and soon afterwards the whole right arm dropped off. [10] [11] [12] By contrast however Fashionable Brighton, 1820-1860 by Antony Dale (online) describes similar damage as 'wore badly' but does not attribute 'broken fingers, nose, mantle and arm on an unloved statue' to weathering or poor quality Coade stone. In 1819, after considerable complaints, the relic was removed and its present state is undocumented.[13]

Contrary to popular belief the recipe for Coade stone still exists, and can be produced. Rather than being based on cement (as concrete articles are), it is a ceramic material.

Its manufacture required special skills: extremely careful control and skill in kiln firing, over a period of days. This skill is even more remarkable when the potential variability of kiln temperatures at that time is considered. Mrs Coade's factory was the only really successful manufacturer.

The formula used was:

This mixture was also referred to as "fortified clay" which was then inserted after kneading into a kiln which would fire the material at a temperature of 1,100°C for over four days.[14] 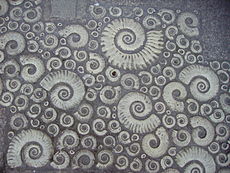 Ammonites in the pavement outside the museum, Lyme Regis.

The Red Lion, aka the South Bank lion, on Westminster Bridge. Modelled by William F. Woodington and Grade II* listed by English Heritage 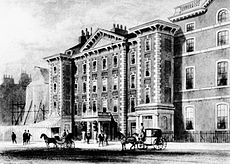 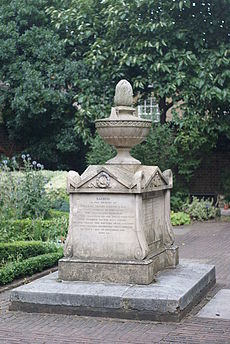 Captain William Bligh's Tomb surmounted by a breadfruit in a bowl

According to BBC research, over 650 pieces are still in existence worldwide.[18]